Expanded use of combined heat and power (CHP) for making electricity could, under one scenario, boost natural gas demand in the United States by as much as 4.42 Tcf/year, according to a report commissioned by the American Gas Association (AGA). 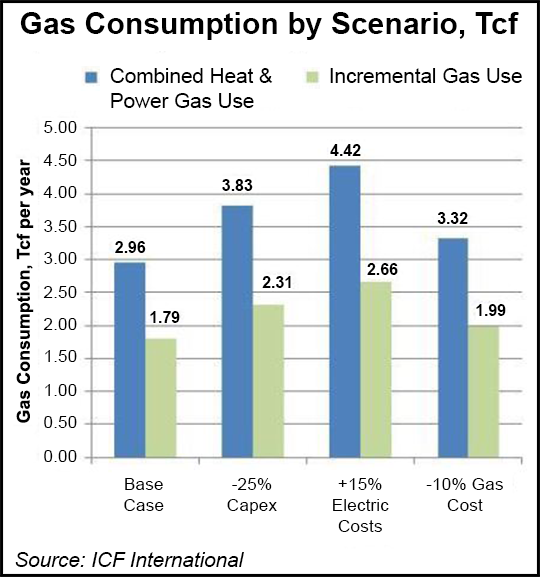 In an 84-page report, “The Opportunity for CHP in the United States,” consulting firm ICF International focused exclusively on CHP, or cogeneration, systems below 100 MW capacity, reasoning that such systems were more likely to be connected to a utility that supplies natural gas. The CHP systems studied were at industrial, commercial, institutional and multi-family residential sites, and collectively account for about 95% of total technical potential.

“It’s an additional growth opportunity for the industry, to utilize the shale resources, as well as natural gas resources in general, more effectively to deliver electric and thermal needs for commercial and industrial customers,” Rick Murphy, managing director for sustainable growth at AGA, told NGI’s Shale Daily on Thursday.

“Quite honestly, it was the result of the shale development and the impact on the market fundamentals of natural gas that really has prompted CHP to be back in the picture from an economic viability standpoint.”

ICF said 82,000 MW of CHP capacity is in use at more than 4,100 sites in the United States, with 71% of the capacity fueled by natural gas. That equates to approximately 4.5 Tcf of annual consumption, or about 18% of annual natural gas demand in the U.S.

Simple paybacks were calculated on a state-by-state basis and divided into three types for the report, based on their degree of economic potential. States with a “strong payback potential” were those able to make a simple payback in less than five years, while “moderate” and “minimal” states were classified as those with paybacks between five and 10 years, and more than 10 years, respectively.

Under a base case scenario using current state electricity and natural gas prices, equipment costs and performance, ICF found the small CHP systems it studied had a total technical potential of 123,303 MW.

ICF then created three scenarios, the first of which modeled a 25% reduction in CHP capital expenditure (capex) or equipment costs from the base case. If that happened, the strong payback potential would increase to 16,647 MW, and seven states (Louisiana, Tennessee, Georgia, Maryland, Alabama, Mississippi and Delaware) would be added to that category.

A second scenario envisioned a 15% increase in average electricity prices, something ICF said was possible with coal plant closings and investment in transmission and distribution projects in key parts of the U.S. Under this scenario, strong potential payback would increase to 17,419 MW and Nebraska would be added to the category.

A third scenario was modeled after a 10% decrease in natural gas prices, something possible with additional supplies in North America, the strong payback potential would increase to 8,694 MW.

ICF found natural gas consumption would vary widely among the base case and the three scenarios it created for the AGA report.

Under the base case scenario, an additional 2.96 Tcf/year of natural gas would need to be added to the 4.5 Tcf/year currently being used for CHP. Consequently, the thermal heat captured off CHP units could displace 1.79 Tcf/year of incremental gas use, or existing thermal heat generated by a natural gas boiler.

“This analysis assumed that all of that waste heat was displacing thermal heat that is currently being produced by natural gas boilers, so the net amount would be 1.79 Tcf,” Murphy said. “That’s the value of CHP — it’s actually capturing heat that is otherwise wasted in traditional electric generation and is using it to satisfy thermal energy or heat needs within the facility.”

Gas consumption and savings were even more apparent under the three scenarios posed by ICF. Under the first scenario (a 25% reduction in CHP capex), 3.83 Tcf/year of natural gas would be needed above the 4.5 Tcf/year used currently, and thermal heat would displace 2.31 Tcf/year of incremental gas use.

Murphy said he believed a combination of all three scenarios was likely. “There’s no magic in the development of those three scenarios, other than looking at what the sensitivity analysis would be on the economics of CHP, if certain things were to happen,” he said.

ICF said the natural gas industry, and utilities in particular, “could serve to reduce project risks, increase market acceptance, and promote the deployment of efficient cost-effective CHP.” Such a strategy should include educating customers, especially commercial and institutional ones, because “lack of awareness of CHP and the savings it can provide…continues to be a significant barrier to CHP development.”

Utilities could also provide low-cost financing or leasing of CHP equipment, and could create an advocacy group that would lobby at the state and federal level for policies that would encourage adoption of CHP.

Last August, President Obama issued an executive order calling for accelerated investment in industrial energy efficiency. He called for a coordinated effort to achieve a national goal of deploying an additional 40 GW of industrial CHP in the United States by the end of 2020.

“Although our analysis wasn’t necessarily looking at that executive order and that challenge, it just so happened when we did our economic analysis and determined the amount of opportunity — the technical potential that could actually achieve a payback of less than 10 years — it came in at number similar to that 40 GW,” Murphy said. “There was some debate as to whether that challenge was a little conservative or a little aggressive, but our work actually indicated that it’s within reach.”