In a report that aired Sunday, CBS News said New York’s Department of Environmental Conservation (DEC) will make an announcement sometime after Sept. 3 that high-volume hydraulic fracturing (HVHF) will be allowed to move forward in the state, ending a four-year wait and an effective moratorium on the practice. 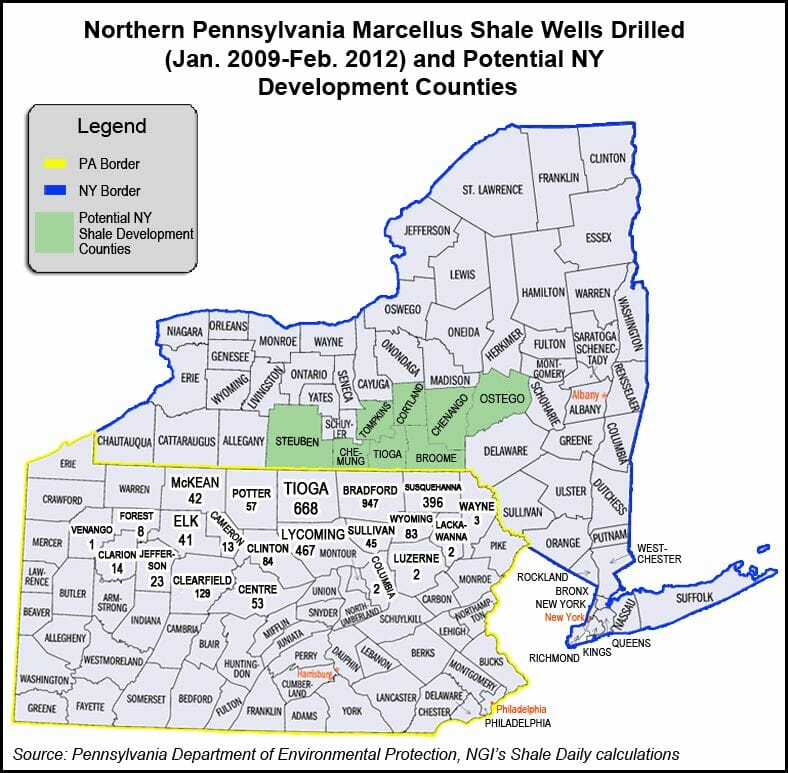 “CBS News has learned that New York is about to okay fracking, and will issue guidelines after Labor Day,” the report said. The segment aired on the “CBS Evening News with Scott Pelley” and was also posted online.

It was unclear if the CBS report was accurate or just a relay of previous media reports that an announcement over fracking was forthcoming. Earlier this month, NGI’s Shale Daily reported that the DEC would announce its plans before Labor Day, citing the Albany Times-Union (see Shale Daily, Aug. 8).

“Our review of [HVHF] is continuing and no decisions have been made,” DeSantis said Monday. “It is premature to talk about options until the review of the science and the facts is complete.”

Neil Vitale, an executive board member of the Steuben County Landowners Coalition (SCLOC), told NGI’s Shale Daily that he hoped the CBS story was true.

“We’ve been waiting for four years and we’ve been disappointed before,” Vitale said Monday. “This is the first time a large news agency has actually come out and said that this is going to happen. I haven’t seen it in any other news agency, and I’ve checked some blog sites, but maybe they’ll run it tonight.”

For its report, CBS interviewed John and Teresa Lyons, owners of Lyons Hill Farm, which is located in Addison, NY, in Steuben County. The Lyons said they were struggling to make ends meet and could use the extra income from leasing their land for Marcellus Shale oil and natural gas drilling.

Vitale said he wasn’t sure if the Lyons were members of SCLOC — the group has more than 5,000 members — but he said he could relate to the Lyons’ troubles because he is an organic dairy farmer with 700 acres.

“I think there are more farmers like him than not,” Vitale said. “I don’t know if other farmers are having as large of a financial problem as he’s having, but I think there are a lot. [As an organic farmer] we do receive a little bit more for our milk, but the economics of it is hurting us too. The price of feed has just gone up so much because of the drought situation and the use of ethanol in our fuel.”

Steuben County is one of five counties that in June were floated by New York Gov. Andrew Cuomo’s administration as possible localities that could be open to high volume fracking, provided the Department of Environmental Conservation grants regulatory approval (see Shale Daily, June 14). Five municipalities in Steuben County — the villages of Addison and Painted Post, and the towns of Bath, Jasper and Woodhull — have since adopted resolutions that support fracking (see Shale Daily, May 22).

Meanwhile, industry supporters are continuing their wait-and-see approach to the news of fracking in New York.

“We’re confident that the DEC and the governor will make this announcement when their analysis is completed to their satisfaction,” Cherie Messore, spokeswoman for the Independent Oil and Gas Association of New York, told NGI’s Shale Daily on Monday.