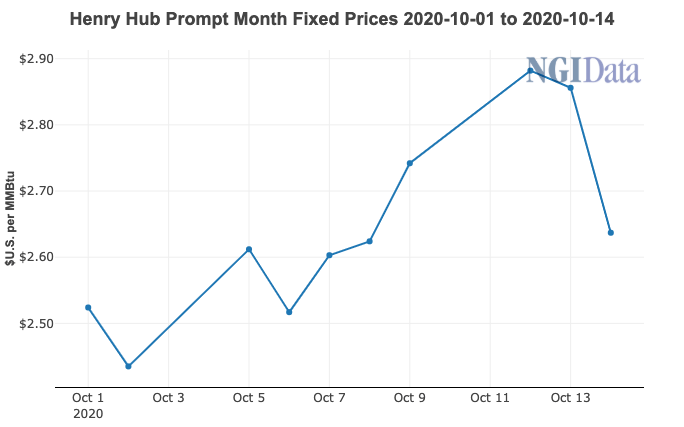 “The 2020 oil crash is still likely to drive a massive imbalance in U.S. gas supplies in 2021,” Raymond James analysts said in a report Monday. “U.S. gas prices will still average around $2 this year but exit 2021 around $4.”

In total, the Raymond James analysts expect onshore dry gas volumes to fall 3.9 Bcf/d year/year in 2021 to 87.6 Bcf/d, with the Marcellus shale the only basin anticipated to show growth – 0.5 Bcf/d year/year. At the same time, as the U.S. economy and markets in both Asia and Europe further adapt to the pandemic and gradually recover, demand is expected to steadily increase. Expectations for normal winter temperatures moving into 2021 – after relatively mild conditions the previous winter – are expected to further drive gas demand, the analysts said.

The U.S. Energy Information Administration (EIA) predicted earlier this month that temperatures would hover near normal and U.S. average heating degree days would be 5% higher this winter than a year earlier. The agency said ongoing efforts to slow the spread of the virus — notably, more people working and attending school at home — will contribute to higher levels of home heating use than normal.

“While weather can always be a wildcard, even with a fairly conservative demand rebound, there should be considerable upside to U.S. natural gas prices in 2021,” the Raymond James analysts said.

The analysts raised their full-year 2020 price forecast 10% to $2.10/MMBtu, following recent gas price rallies. For next year, they expect Henry Hub prices to average $3.50/MMBtu and approach $4.00/MMBtu before the year ends.

Morgan Stanley analysts, citing both production declines and a potential rebound in winter demand, said last week that Henry Hub prices could soar to $5.00/MMBtu in 2021. Researchers said that the drop in oil prices stalled growth in associated gas coming from previously robust oil production. That, combined with a roughly 50% reduction in spending by E&P companies from 2019, could result in a 3-4 Bcf/d year/year decline in associated gas output by the end of 2020. With West Texas Intermediate crude currently below the $40/bbl threshold needed to hold U.S. volumes flat in 2021, the analysts said, declines could continue.

EIA said total U.S. working gas in storage is expected to exceed 4.0 Tcf by the end of October, setting a record, but continued low crude prices would keep associated gas output from oil-directed rigs in check.

U.S. LNG feed gas deliveries into export facilities dropped from a peak of 10 Bcf/d in March 2020 – just before the pandemic took hold in the Lower 48 – to a trough of around 3 Bcf/d over the summer, the analysts said. This fall, however, Asian demand has strengthened as economic conditions improved and industrial energy needs increased.

“We’ve seen somewhat of a ‘Goldilocks’ scenario take place in a few regions – enough pandemic easing for industrial activity to perform a bit better, but still strong residential demand as most people stay home. In response, international gas prices have doubled or even tripled off the bottom,” the Raymond James analysts said.

The analysts added, however, that rising Henry Hub prices should slow both domestic and export demand by next summer.

“With U.S. gas supply falling off a cliff and demand normalizing,” they said, “we would expect the market to send a price signal to keep price-sensitive U.S. natural gas demand in check.”