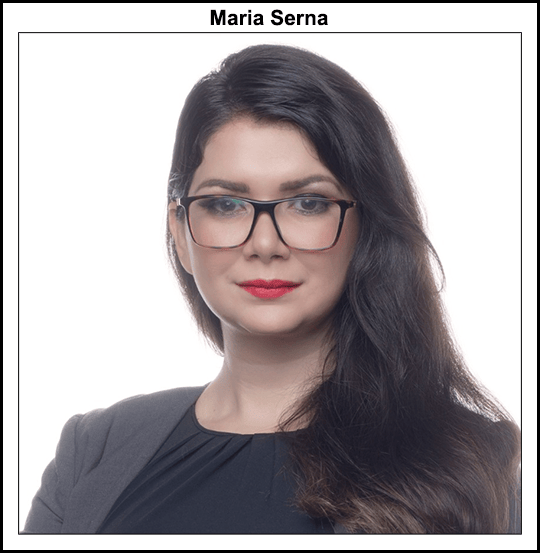 This 34th Q&A in the series is with María Serna, Partner of Legal Services at energy consultancy Talanza Energy in Mexico City. Serna, who has been with Talanza since 2018, previously served as the Head of Legal Services at the company prior to becoming partner in 2019.

Serna has broad experience in transactional and regulatory energy matters, both in the private and public sectors. At Talanza, Serna designs regulatory compliance strategies for international energy companies and assists them to reach their operational goals. She also provides legal support and guidance to assure clients comply and are in accordance with government regulatory requirements.

Prior to joining Talanza, Serna worked as a policy and government affairs advisor at Chevron in Houston and was legal counsel at the Mexican Energy and Environment Security Agency (ASEA) from 2015-2016. From 2014-2105, Serna was the Director of the Bidding Department for E&P contracts at the National Hydrocarbons Commission (CNH) for the first three rounds of the country’s Round One auctions.

NGI: If you had to summarize the current state of the energy sector in Mexico with a single word, what would it be and why?

Serna: Transformation. We are seeing significant changes in the execution of the regulatory framework that, de facto, are transforming the environment of the sector.

NGI:  In your opinion, what are the main concerns in the energy sector today?

Serna: Legal certainty for companies that operate or are looking to operate in Mexico. I think investors and companies want to know if there will be an opportunity to participate in the new market rules and how much legal certainty their investments will have.

NGI:  Currently, Mexico imports around 80% of its total demand for natural gas from the United States. In your opinion, what would be the ideal relationship for Mexico in terms of imports of natural gas?

Serna: Well, the ideal balance depends on the perspective at which you look at it. For example:
1. If self-sufficiency and energy sovereignty is the goal, the ideal balance would be to stop importing 100% of the gas. With the eventual decrease in demand for gasoline in favor of an increase in electric transportation, replacing 100% of gas imports represents a better alternative for self-sufficiency.

The drawback of this alternative is that gas in the U.S. is very cheap and the trend indicates that it will remain cheap in the long term. Substituting gas imports would imply a higher price for gas in Mexico.

2. From an economic perspective, the ideal is to import as much gas as necessary to boost natural gas consumption, especially in the industrial sector. In this case, the correct proportion is 80%, because with the current gas production capacity, the country only has to produce 20% of what it consumes.

3. The ideal scenario, in my perspective, is to give tax incentives for the exploration and production of natural gas to be able to compete with U.S. prices and further lower prices in the country, as well as in the region.

The only option that I see for something like this to happen is through private bid rounds for the unconventional basins, something that this government has said it will not do. In this ideal scenario, Mexico would produce so much gas that it could either consume it or export it to regions where the price is higher.

NGI: In recent months and at this time of a global pandemic, what are the main questions that foreign investors and companies have about the energy sector in Mexico?

Serna: It is curious that most of the efforts to transform the energy sector have taken place just at the time of the pandemic. Even the CENACE agreement was based on the extraordinary situation of the pandemic, though we later saw it reflected in Sener’s policy, which was not limited to this particular situation.

It seems that the reactions to the pandemic do not go hand in hand with the interests of private investment, and that it is being used to review and adjust the rules in the Mexican energy industry. I think the main question for investors is whether or not they will be able to continue investing in Mexico after all of these adjustments.

NGI: What is your forecast for the energy sector in Mexico and what do you expect in the second half of the year?

Serna: I think it is very probable that there will be reforms to the regulatory framework.

Though to date the regulation has not been touched and has only been used by executive powers to issue policy, grant permits, etc., the truth is that the litigation that has been triggered has put the brakes on the changes that the administration expected. I believe that we are going to begin to see reforms that will allow the government to legislate for the changes that they seek to the regulatory framework.

NGI: There have been a lot of changes to the energy regulatory agencies recently, including a significant reduction in staff at the Energy Regulatory Commission, or CRE, announced a few weeks ago. In your opinion, what do these changes represent for the energy sector?

Serna: At first glance, it seems like an effort to weaken the capacity of the regulatory bodies to respond. However, I think the objectives of a decision like this still lack some clarity.

There are models, including in our own regulatory bodies, such as ASEA, where some of the activities that correspond to the regulator have to be outsourced to third parties so that they can attend to the immense amount of requests. This is done by authorizing specialized people or entities who later charge a fee to the interested parties.

So, we could begin to think about a model that considers the opportunities that are available, given that each regulatory body has distinct needs and abilities. What is perhaps a better option is, instead of limiting public spending, we could consider ways to complement it with private participation. This could ensure that the technical quality required by the regulatory agencies is maintained, while the role of the regulator to respond to situations where required isn’t weakened.

Without question, the reduction of 75% of the employees at the CRE is a very damaging blow. It makes it very difficult for an agency to continue to operate, particularly because there isn’t a response plan in place for such a significant cut in staff.

So, it does appear it will weaken the regulatory bodies’ response ability. I think that right now, we should take advantage of the moment to raise our voices to explain how necessary it is for the industry to continue to have agile regulatory bodies that are specialized and have the technical expertise to respond to the needs of the industry. This would promote a model of private participation in the industry that pairs with the goals of the current administration, as well as the private sector.

I think this is an opportunity to discuss such a model publicly, which perhaps isn’t being considered yet. Instead of thinking about how these changes are going to affect us, we should be thinking about what we can do to help the government so that the objectives of both sides – the public and private sectors – are met.