An East Coast LNG export terminal that would tap into vast amounts of feed gas from the Appalachian Basin is aiming to pre-file with federal regulators by the end of the year and reach a final investment decision by 2024. 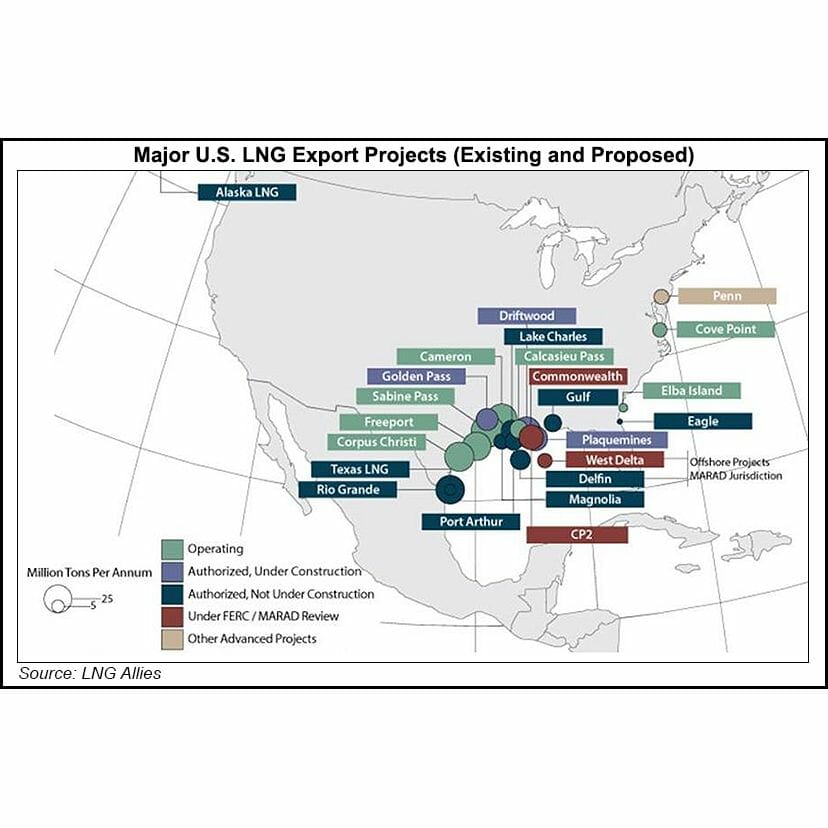 The 7.2 million metric tons/year (mmty) facility would be located at a yet-to-be-determined site along the Delaware River near Philadelphia. It could produce the first liquefied natural gas by 2028, said Franc James, founder and CEO of Penn America Energy Holdings LLC.

James acknowledged, however, that the $6 billion-plus Penn LNG project faces an uphill battle in the Northeast, where environmental opposition has stymied energy infrastructure.

“I’m from Pennsylvania, so that’s probably why I gravitated toward developing this project,” he told NGI. “We’re in a state, regardless of political party, that’s enjoyed a history of energy…We think if you build it in the Northeast, Pennsylvania is likely the only place to build a terminal.”

The Philadelphia native, a former iron ore and copper mining executive, has been working on the project since 2015. James said his New York City-based company, which includes industry veterans, has moved beyond the proof of concept stage and is currently working on commercialization, permitting and engineering.

Reached by phone last week just ahead of a trip to Europe to continue commercial discussions, James told NGI the company is in talks to supply up to 5 mmty of LNG. He said discussions are ongoing with two majors, an international trader and utilities.

“We are a project size that is easily absorbed into demand,” James said. Russia’s invasion of Ukraine has created a need for new natural gas supply and made the Penn LNG project competitive on its current timeline, he added.

The company is currently working with Bechtel Corp. on engineering. James also said the 1.2 Bcf/d of feed gas the terminal would need can be easily supplied by the Texas Eastern Transmission Co. and Transcontinental Gas Pipe Line Co. interstate systems.

The facility would only need to build a connector to those pipelines, James said. That would help Penn America avoid the kind of lengthy battles over larger systems in the region that have stopped pipeline projects altogether.

“We are optimistic that a southeastern Pennsylvania facility would benefit building trade union workers, the local economy and strengthen ties with key allies and trading partners.”

The facility would also help to alleviate pipeline constraints in the basin, where natural gas production in the Marcellus and Utica shales is above 35 Bcf/d. EQT Corp. CEO Toby Rice said recently that Appalachian pipeline capacity has “hit the wall.”

EQT is the largest gas producer in the United States. The company launched an initiative earlier this year to promote U.S. LNG exports. It comes at a time when global buyers are looking to diversify supplies in a shift away from Russia after the invasion of Ukraine.

While there are 20 LNG projects in various stages of development along the Gulf Coast, Appalachian pipeline constraints could make it difficult for some to be completed. As a result, Rice said EQT is working to “catalyze” East Coast LNG projects. The basin produces more natural gas than some of the world’s largest exporting countries.

“We know there’s more than enough gas supply in the ground,” James said. “What we’ve also tried to do is ensure that there’s interest in moving their molecules to our terminal and to expose a portion of their portfolio to international pricing.”

He added that while the company is confident it can tap the capital markets for financing, there has been interest among international suitors for a stake in the project. The company has also held talks with Appalachian exploration and production companies about making an investment.

Penn America would purchase feed gas for liquefaction and sell it at a free-on-board basis at prices linked to Brent crude, the Title Transfer Facility, other international benchmarks or on a blended basis.

Potential buyers, James said, recognize that the record high prices seen this year amid turmoil in the global energy markets are unlikely to last.

“The buyers we’re working with have an incredible amount of U.S. LNG in their portfolio that is Henry Hub-based,” he said. “What these buyers are ultimately interested in is natural gas that is indexed to their home market, or target market.”

James said the company has identified roughly four locations for the project along the Delaware River, but has not selected a location. The Marcus Hook Industrial Complex is already located along the river, where Appalachian producers export natural gas liquids to overseas markets.

James said the project is still anticipating “a great deal of pushback” from environmental groups.

Earlier this year, New Fortress Energy Inc. (NFE) was forced to put a proposed export terminal on the Delaware River in New Jersey on hold after it faced staunch opposition. The company reached a deal with environmental groups to pause development of the 1.5 mmty facility that would export gas transported from a liquefier in the heart of the Marcellus Shale.

The Delaware Riverkeeper Network (DRN) has been instrumental in the fight against NFE’s project. DRN leader Maya van Rossum said the group is watching the Penn LNG project closely and said it’s wrong for the river, the environment and the world.

“We will be taking all steps, including legal, as necessary to prevent this travesty from being able to advance,” she told NGI.

James stressed his company is working to minimize the project’s environmental footprint as much as possible. It would be powered by all-electric drive trains instead of gas turbines, utilize renewable power generated off site, tap certified gas supplies and be carbon-neutral.

“There will be an incredible amount of opposition and litigation,” he said. “All we can do is be open and transparent to demonstrate safety and build social license…We’ve done everything we can to build a strong foundation to address the environmentalists that are really going to attack the pipeline and attack the project.”