New oil and gas auctions are stalled in Mexico, but that hasn’t stopped private sector companies from continuing to find success with their exploration and production (E&P) projects. 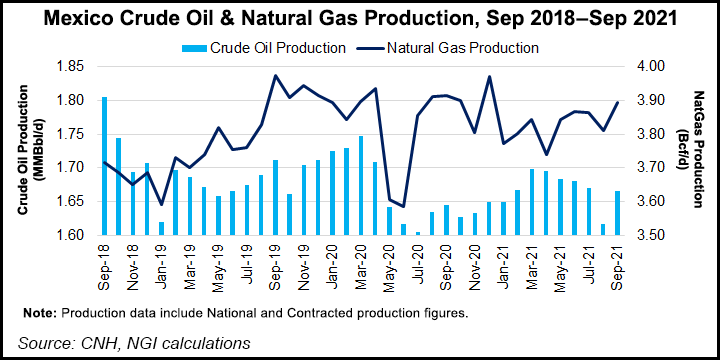 “The upgrading of existing infrastructure was needed for the start of oil production and demonstrates the collaboration between Pemex and private sector energy firms in the benefit of Mexico,” Fieldwood stated.

Earlier this year Brügmann told NGI’s Mexico GPI that he saw total production of around 40,000 b/d. “In the future we expect the project to reach 100,000 b/d and be one of the top producing assets in Mexico,” he said.

“We expect to produce 55 MMcf/d of natural gas by the end of 2021 and to reach a maximum rate of 130 MMcf/d by 2023,” he said. “This production should contribute positively to the supply of gas in the southeast of Mexico,” he said. He called the future of E&P in Mexico “bright.”

In separate news, Russia’s Lukoil on Tuesday announced it struck oil in the Yoti West structure at Block 12 offshore Mexico. The field was discovered after drilling the first exploration well, with initial estimates pointing to 250 million bbl of oil in place.

An assessment plan for Yoti West would be developed based ​on additional drilling results, Lukoil said. The company won rights to the block, which it shares with Italy’s Eni SpA (40%), in 2017.

Private Activity On The Up?

Third quarter E&P advances in Mexico included Australia’s BHP giving its stamp of approval to spend $258 million for the front-end engineering design phase for the Trion project in Mexico’s deepwater. BHP operates and holds a 60% stake in Mexico blocks AE-0092 and AE-0093, which contain the Trion discovery. A subsidiary of Pemex has a 40% interest.

Still, despite moves by Mexico President Andrés Manuel López Obrador to strengthen the oil giant Pemex, private sector firms are seen as being protected in the upstream segment. In a recent interview, lawyer Julia González Romero told NGI’s Mexico GPI that the energy reform proposal presented by López Obrador “does not impact the (existing) oil exploration and production contracts.”