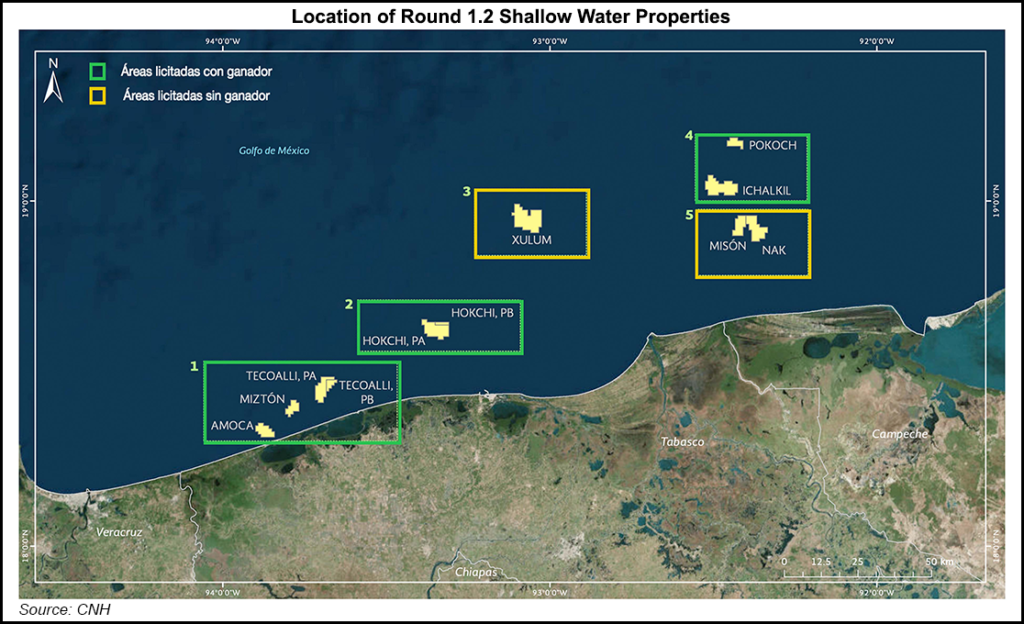 The fields pertain to block 4, an area for which CNH awarded a 20-year production-sharing contract to Fieldwood and its Mexico-based joint-venture partner Petrobal S.A.P.I. de C.V. in the Round 1.2 bidding process in 2015.

Fieldwood is a subsidiary of Riverstone Holdings LLC, an energy-focused private investment firm. Petrobal, meanwhile, is a unit of Mexican conglomerate Grupo BAL.

Fieldwood and Petrobal each hold a 50% stake in block 4, for which production levels of oil and natural gas are expected to peak in 2026 at around 104,000 b/d and just under 160 MMcf/d, respectively.

With the Jan. 29 approval, all three offshore projects awarded through Round 1.2, along with the block 7 project awarded in Round 1.1, have obtained the green light for development.

The other Round 1.2 projects comprise Hokchi Energy’s block 2 and Eni SpA’s block 1, each of which secured approval in 2018 for their respective development plans.

Block 2, which contains the Hokchi field, is expected to hit an oil production plateau of 28,000 b/d, while the Amoca, MiztÃ³n and Tecoalli fields at Eni’s block 1 are expected to peak at a combined 90,000 b/d.

This would make Ichalkil-Pokoch the largest producer of the Round 1.2 projects, Franco pointed out.

Commissioner Hector Moreira called block 4 “spectacular for the country.” Operating income over the project’s lifespan is expected to total $21.3 billion, with 85% (about $18 billion) going to the state.

“Hopefully the bid rounds are reactivated,” commissioner Sergio Pimentel said, in reference to a three-year suspension of the rounds imposed by President AndrÃ©s Manuel LÃ³pez Obrador.

“Today we have good news, but if we stop exploration activity, the bad news will come over the medium to long-term. If exploratory activity in the country doesn’t continue, there will be a major slowdown.”

LÃ³pez Obrador has said that the tenders will not resume until projects awarded through previous rounds start producing. Pemex, which still supplies essentially all of Mexico’s hydrocarbon output, reported crude production of 1.9 million b/d in November, down from a peak of 3.4 million b/d reached in 2004. Gross natural gas output averaged 3.76 Bcf/d, down from a high of 6.52 Bcf/d attained in 2009.