Global drilling behemoth Precision Drilling Corp. cut costs by double-digits and improved efficiencies across its operations during the second quarter, but there’s paltry visibility as uncertainties surrounding the impacts of Covid-19 remain a concern, management said. 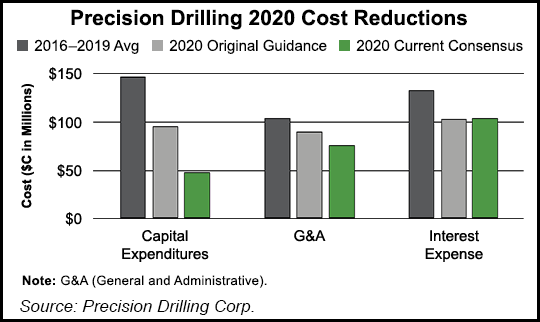 Even though revenue plunged by nearly half from a year ago to $47 million, the multi-talented operator is poised to compete once the exploration and production sector is back to work, CEO Kevin Neveu said.

“The immediate and decisive steps the Precision team has executed during this pandemic and economic crisis have delivered very strong financial and operational results,” he said. “Our actions have further strengthened and positioned the company both financially and competitively for an eventual industry recovery.”

Structural cost reductions were undertaken during the quarter that were above initial cuts announced in March. Because of the unrelenting damage from Covid-19, Precision began laying off staff, slashed capital spending by half to $48 million and trimmed compensation for executives and board members by 10-20%.

The initial measures were designed to reduce annualized fixed costs by more than 30%, including up to $30 million in general/administrative expenses. Since March, however, Precision squeezed out more excess costs which should lead to another $14 million in annualized savings.

“We will continue to explore every avenue to reduce our costs and spending and conserve cash to keep Precision on track” toward its long-term debt reduction goals, said Neveu.

By region, U.S. field margins improved on “tightly managed expenses and strong contract book performance, both critical in this challenged environment,” said the CEO. Lower 48 activity now appears to be flattening, however, with limited visibility to the end of the year.

In Canada, Precision achieved 36% market share during the quarter, driven by the Super Triple rig fleet, which is designed for pad style development in the Montney and Duvernay formations in Western Canada.

Even though international rig activity also is contracting sharply, Precision has six rigs under long-term contracts in Kuwait and Saudi Arabia that should remain stable sources of revenue. “Additional rig deployment and re-contracting opportunities will be delayed until the customers in these regions fully return to work.”

The contract drilling fleet held up fairly well at 227 rigs versus 232 in the year-ago period. However, drilling rig utilization days fell sharply from 2Q2019, with U.S. operations down by almost 61% and revenue/day declining by 25%. Canada rig utilization cratered, off 65% with revenue/day down by 6%. The international arm saw a shallower decline, down less than 6% with revenue down by the same percent.

Despite the decline in field operations, the Alpha technologies and applications (app) that allow for remote work and improved efficiencies improved their worth.

“During the second quarter, we commercialized two additional drilling apps for a total of six commercial apps this year, and we have 12 more under development,” Neveu said. “This year, we have utilized AlphaApps on over 110 wells throughout North America, generating 890 AlphaApp days.”

The AlphaAnalytics platform, which was used during the quarter for an undisclosed producer in the Permian Basin, helped to reduce drilling time on a 28-day horizontal well by 4.1 days, setting an efficiency benchmark.

In the Haynesville Shale, the platform assisted in improving another customer’s full fleet of rigs, and it delivered an 8% sequential improvement in drilling times.

Covid-19, however, continues to weigh on the outlook, management warned. “The situation remains dynamic, and the ultimate duration and magnitude of the impact on the economy and the financial effect on the corporation remains unknown at this time.”

The company recognized about $8 million for cancellations related to idled but contracted rigs in the United States. It also recorded $6 million in restructuring charges and Canadian wage subsidiaries totaling $9 million.