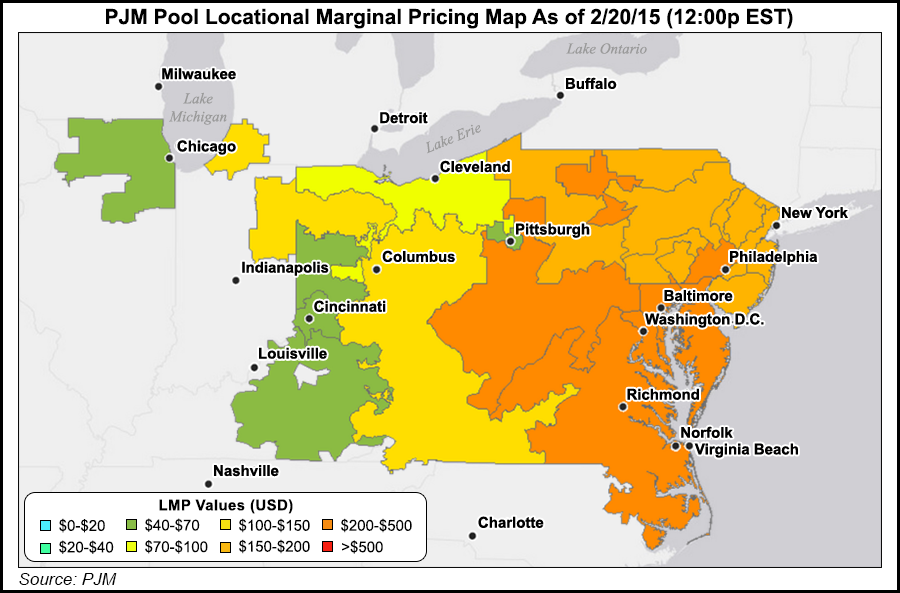 A gradual, manual process incorporating the changes has been under way since the beginning of the year, PJM’s Chantal Hendrzak, executive director of operations support, told NGI. The go-live date for the automated functionality was originally planned for Feb. 19 but was pushed back due to inclement weather.

The changes at PJM are in step with efforts under way at other system operators, such as ISO New England and New York ISO, and primarily will benefit generators. However, natural gas marketers and pipelines will enjoy improved visibility of gas commodity and pipeline capacity demand, according to Hendrzak.

The adjustments in how power generators can schedule offers should help in adjusting grid operator needs to pipelines’ gas delivery schedules, easing the pressure for changes in the gas day, a hard-fought issue that has divided the gas and electric industries (see Daily GPI, Dec. 24, 2014; Dec. 3, 2014).

Generators within PJM need to have their cost schedules submitted to the regional transmission organization by 4:00 p.m. the day prior to the operating day. This means that the PJM operating day straddles two gas days. So generators know what their costs will be for only a portion of the PJM operating day and have to essentially guess at what they will be for the remainder. The synchronization of gas and power days has been a problem across the energy industry.

“Because of this mismatch in gas and electric days, we are asking the gas generators to tell us how much they’re going to cost and they don’t actually know,” Hendrzak said. “They know for the part of it that aligns with the gas day that they’re in. But they don’t know for the full day because it’s going to get into another gas day.”

Generators have had the ability to submit about 78 schedules of capacity and costs to PJM in advance. These can include a whole range of costs and operating parameters. “They’ll basically say, ‘here’s how many megawatts I’m available on that schedule. Here’s the minimum amount, my minimum amount of time that I have to run on that schedule…’So that our systems can bring all that information in,” Hendrzak said.

PJM crunches the numbers and, with system constraints in mind, selects the lowest-cost generators first to supply the grid.

Because generators wanted to better know their costs before bidding into the grid, PJM has come up with a way for them to choose what previously submitted schedules they want to make available to the RTO essentially in real time. Aside from a three-hour rolling lockout window during which PJM’s computers are crunching numbers, generators can go in and change the availability of the schedules they’ve offered based upon market conditions for natural gas, etc.

“They can make their cost schedules available that are most reflective of the actual costs to the unit.”

The change will allow generators to better align their costs and the prices that they offer to the grid. It likely will also mean more assurance for pipelines and gas marketers about commitments for capacity and commodity made by generators.

“Maybe they’ll have a little bit more certainty in terms of what their generator is going to do…It’s probably a little bit more stability for the pipelines and the marketers because the generation owners know now that they can communicate to PJM and have it settled. Their costs can be reflective of what it actually costs them.”

While the change will be a help to generators, it could just be a step toward a better solution. “…[W]here our stakeholders want to go — and this is where New York and ISO New England already are — which is allowing…the generation owners to just put their costs in…

“We want to be able to give them the ability to say. ‘you know what, my cost is $17; here’s my cost.’ That’s a much bigger change for us. New York is doing it. ISO New England is doing it. We are likely going to be scheduling, PJM, some of us, a trip up to New York to learn what they did, how they did it, what challenges have they had so we can tell our stakeholders what would be involved.”