After the recent flurry of mergers and acquisitions in the upstream space across North America, Phillips 66 thinks the midstream space is ripe for consolidation. 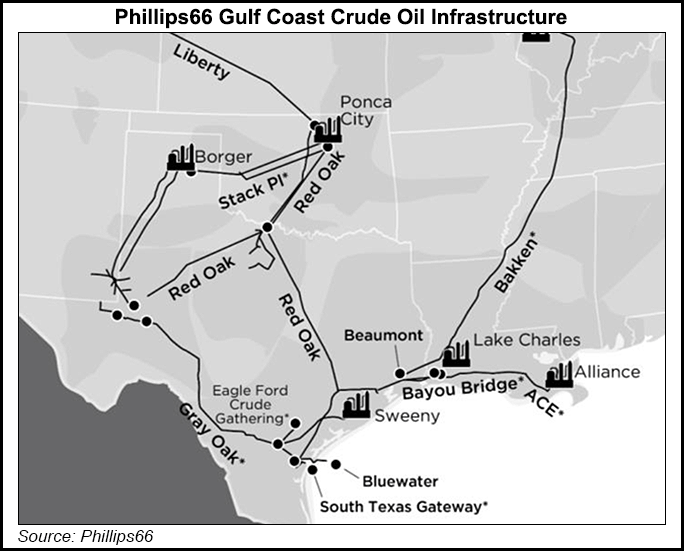 The Houston-based management group discussed third quarter performance for the energy manufacturing and logistics firm during a conference call with analysts Friday.

CFO Kevin Mitchell thinks the company could position itself to participate in broader industry consolidation.

“We think it needs to happen in the midstream space. You’re seeing that happen in a pretty big way in the upstream right now,” he said. For the midstream segment “bigger is better” would be helpful as it would lead companies to “be more efficient to drive cost efficiencies and commercial synergies through the entire midstream value chain. “And so, we think that’s likely to happen.”

Phillips 66 continues to advance its 240,000 b/d ethane pipeline project running from Clemens Caverns near Brazoria County to Gregory, both in Texas. The pipeline is backed by long-term commitments and would serve petrochemical customers in the Corpus Christi area. Pipeline construction is roughly 55% complete and is expected to start-up in mid-2021.

In August, Phillips launched an open season to gauge interest in additional oil transportation capacity from the Permian Basin to South Texas. The new takeaway capacity along the Gray Oak Pipeline would terminate in Victoria, 85 miles northeast of Corpus Christi. In-service is targeted in the first half of 2022.

On the controversial Dakota Access Pipeline (DAPL) crude pipeline, in which the company is an investor, Vice President of Operations Timothy Roberts said the company “still had two items that need to be addressed” by federal court. “We fully expect that those will be addressed based on the briefing schedule we’ve seen, sometime towards the end of the year, maybe rolling into early next year, but we expect them both around the same time.”

At the South Texas Gateway terminals, the first dock and 5.1 million bbl of storage capacity have been commissioned. The terminal began crude oil export operations in July. Terminal operations are expected to ramp up through the end of this year as additional phases of construction are finished.

“We expect the project to be completed in the first quarter of 2021 with total storage capacity of 8.6 million bbl and up to 800,000 b/d of export capacity,” management said.

The company reported transportation 3Q2020 adjusted pre-tax income of $202 million, $72 million higher than the second quarter. The increase was primarily because of higher pipeline and terminal volumes, including ramp-up of volumes on the Gray Oak Pipeline.

The company sees a 2021 capital budget of $300 million. Details on the 2021 capital program are to be provided in December.