One day after two giant Canadian producers announced a tie-up and less than a week after other mega mergers were announced, Houston-based Contango Oil & Gas Co. agreed to expand its holdings in the Lower 48 in an all-stock merger with Mid-Con Energy Partners LP. 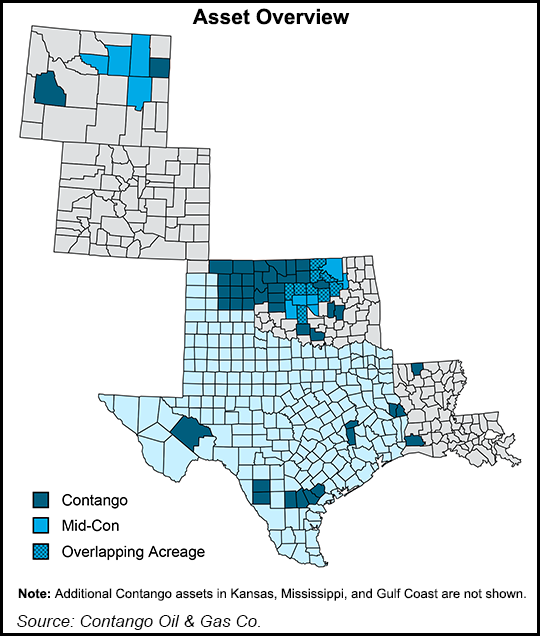 Contango works the shallow waters of the Gulf of Mexico (GOM) and across the Lower 48, mostly in Louisiana, Oklahoma, Texas and Wyoming. Mid-Con, formed in 2011 and which has Contango ties, focuses on enhanced oil recovery primarily in Oklahoma and Wyoming.

For each common unit, Mid-Con unitholders would receive 1.75 shares of Contango common stock, representing a 5% premium based on a 15-day volume weighted average price. The exchange ratio implies an enterprise value for the combined entity of more than $400 million based on Friday’s closing price.

“This merger is exactly the type of transaction we look for to enhance value for our shareholders in the current market,” Contango CEO Wilkie Colyer said. “We were able to substantially increase our reserve base and cash flow in an accretive transaction while meeting the needs of Mid-Con unitholders by further rationalizing their cost structure and mitigating their refinancing risk by combining our respective credit facilities. In that sense, this is truly a win for both parties involved in the merger.”

Contango has had a management service agreement with Mid-Con and previously brought on some of its employees, “which has meaningfully enhanced Contango’s expertise,” Colyer said. “This transaction is simply the next step, and certainly not our last, in our stated goal of consolidating a sector that is in dire need of it.”

Contango’s asset base is broad and deep. Long a GOM explorer, it works Eugene Island Block 10 where it produces from the Dutch and Mary Rose wells in Louisiana waters. A joint development agreement completed last December with Juneau Oil & Gas LLC also gives it the right to acquire stakes in up to six exploratory prospects.

In Oklahoma Contango has more than 147,000 net acres, targeting zones in the Cherokee platform and the STACK, aka the Sooner Trend of the Anadarko Basin, mostly in Canadian and Kingfisher counties. In the Western Anadarko Basin, Contango operates 76% of the wells in its nearly 302,000 net acreage holdings.

Within the Permian Basin’s Delaware sub-basin in West Texas, Contango partners on about 8,000 net acres with estimated proved reserves totaling 43.3 Bcfe. In addition, it has Lower 48 acreage in Kansas, Mississippi, Wyoming and on the Gulf Coast.

The merger, unanimously approved by the Contango board and the Mid-Con board conflicts committee, is set to be completed by early 2021.

Contango noted that it ended the third quarter with $66 million debt outstanding on its $75 million borrowing base credit facility and $8 million of liquidity. Sales volumes were estimated at 16,500-17,000 boe/d, at the high end of the original guidance. Realized pricing excluding hedges was $18.85-19.15/boe.

North America has seen a spate of merger activity in the past few weeks.

On Sunday, Cenovus Energy Inc. announced it would take over Canadian oil and gas rival Husky Energy Inc., combining two of the country’s top exploration and production (E&P) companies, in a share swap valued at C$3.8 billion ($2.85 billion). Total estimated value of the transaction, including debt, is C$23.6 billion ($17.7 billion).