Mergers and acquisitions (M&A) in the U.S. upstream oil and gas segment dipped sharply in the second quarter to $12 billion in transactions, almost two-thirds below the $34.8 billion in the year-ago period, according to the latest tally by Enverus. 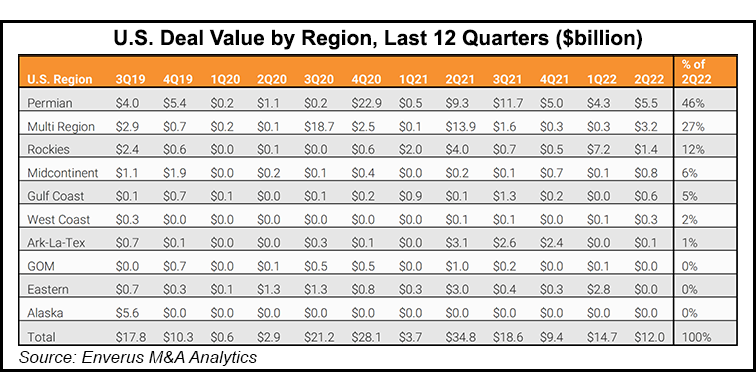 Private equity (PE) firms accounted for about 80% of the latest quarter’s deal value, with nearly half the total concentrated in the Permian Basin, researchers found.

“As anticipated, the spike in commodity prices that followed Russia’s invasion of Ukraine temporarily stalled M&A as buyers and sellers disagreed on the value of assets,” said Enverus director Andrew Dittmar.

“High prices, though, also encouraged a rush by PE firms to test the waters for M&A. While not everyone that is going into the market is getting what they deem to be a suitable offer, enough are to drive modestly active upstream M&A.”

Despite the bullish commodity price environment and global thirst for hydrocarbons, access to public capital remains a challenge for exploration and production (E&P) firms, according to Enverus.

“Public equity markets are retaining a multi-year trend of being essentially closed for private E&Ps to launch a traditional IPO,” Dittmar said. “That leaves M&A as the main exit route. There is appetite on the public company side to buy out private E&Ps, but public companies need to keep the valuation paid on these deals in line or less than where the market is pricing their own stock.”

He added, “With E&P equity valuations still modest, in many cases there may not be much room to raise offer prices.”

The Enverus team explained that, “The disconnect in perceived value between buyers and sellers is affecting both producing assets and undeveloped future inventory. Historically, existing production was a bit more straightforward to value, but at current commodity prices buyers want to bake downside protection into their offers…

“Untapped inventory is even more challenging to estimate value on, and right now buyers are only willing to pay for high-quality locations in well-established areas.”

One option for public E&Ps to get deals done is to tap “relatively cheap debt financing in M&A,” researchers said, citing an uptick in recent weeks in the use of debt to pay for deals.

“By using debt, companies can drive accretion to their key shareholder return metrics, and the additional cash flow from the new assets can also be used to pay down the loans and keep leverage in check. Provided banks continue to be willing to lend and E&Ps willing to borrow, this has the potential to fuel further deals.”

Dittmar said the trend of PE players bringing their assets to market amid high oil and natural gas prices is likely to continue.

“Looking forward, I don’t think we will see any shortage of assets available for sale by private equity firms across every major shale play,” he said. “The challenge is finding buyers willing to pay their asking prices.”

Dittmar explained that, “Public E&Ps remain chiefly concerned with getting capital back to shareholders and being too aggressive on M&A can smack of growth investors don’t want.

“That said, the flood of offerings should create opportunities for shrewd deal makers to unlock value with M&A and, if we avoid a major recession, the fundamentals for energy prices still look strong.”