Strong growth in oil production — especially in the Permian Basin — propelled Devon Energy Corp. to record the highest average daily production rate in its history during the second quarter of 2013, as the company also saw positive test results in the Woodford Shale. 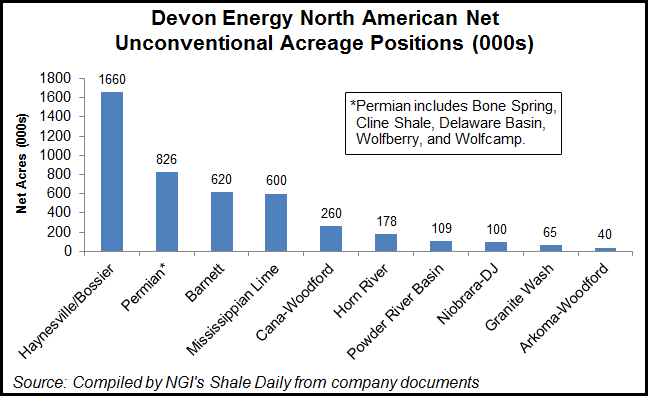 “The second quarter was an outstanding one for Devon as we continued to successfully grow high margin oil production,” said CEO John Richels. “We remain on track to deliver total company-wide oil production growth in the high teens for 2013, led by light oil growth of nearly 40% in the U.S.”

The Permian Basin was the star of the show for Devon during 2Q2013, with oil production averaging a record 76,300 boe/d and increasing 32% from 2Q2012. The company reported that it had 30 operated rigs and 94 gross wells drilled in the Permian as of June 30. Both tallies are the highest among all of the regions where Devon operates.

“The most significant contributor to this oil growth was the Bone Spring play in the Delaware Basin,” the company said. “Also driving oil growth in the Permian was [a] strong performance from [our] Wolfcamp Shale position in the Midland Basin.”

In the Mississippian-Woodford Trend, Devon began production on 36 operated wells during the second quarter, with 10 wells targeting the Woodford Shale hitting an initial 24-hour production rate average of 840 boe/d. Overall production in the play was 7,000 boe/d at the end of June, a 100% increase from the end of 1Q2013.

Net production from Devon’s two projects in the Canadian oil sands, Jackfish 1 and Jackfish 2, averaged 53,200 b/d in 2Q2013, a 4% increase from 2Q2012. Meanwhile in the Granite Wash, net production increased 33% during the same time frame. Initial 30-day production from nine wells brought online there during 2Q2013 averaged 1,600 boe/d, including 900 b/d of oil and NGL.

“Adjusted EPS of $1.21 [was] significantly ahead of our $0.94 estimate and the Street’s $0.95,” said David Tameron, senior analyst for Wells Fargo Securities LLC. “Production came in 8,000 boe/d ahead of guidance, which also exceeded our and consensus production estimates.

Devon has an estimated 1.67 million net unconventional acres in the Haynesville-Bossier and 826,000 acres in the Permian. It also has significant holdings in the Barnett (620,000 acres) and Mississippian Lime (600,000 acres), and more than 750,000 net acres in several other plays.