Royal Dutch Shell plc’s decision Tuesday to pull the trigger on a massive ethane cracker northwest of Pittsburgh is part of a revamp for the oil major, which for now will focus on “cash engines,” fueled by petrochemicals and the deepwater, CEO Ben van Beurden said. 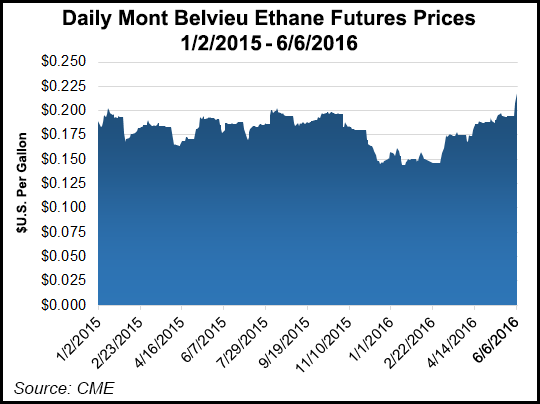 The cracker would be the first U.S. facility built outside the Gulf Coast in more than two decades, news that was hailed across the Northeast as a watershed moment in the evolution of the Marcellus and Utica shales (see Shale Daily, June 7). Shell began eyeing a cracker for the Northeast region five years ago, eventually settling on Pennsylvania (see Shale Daily, March 16, 2012; Dec. 5, 2011; Sept. 7, 2011). Give and take began with state officials, land was secured and then stakeholders waited for the FID, which was delayed several times (see Shale Daily, March 4).

“Shell Chemicals has recently announced final investment decisions to expand alpha olefins production at our Geismar site in Louisiana and, with our partner CNOOC in China, to add a world-scale ethylene cracker with derivative units to our existing complex there,” said Shell Executive Vice President Graham van’t Hoff, who oversees the global chemicals business. “This third announcement demonstrates the growth of Shell in chemicals and strengthens our competitive advantage.”

Shell plans to begin construction this year on an expansion at its Geismar campus, which would make it the largest alpha olefins (AO) producer in the world (see Daily GPI, Nov. 30, 2015). Shell currently has three AO units on the 800-acre Geismar site, and the fourth unit being built would produce around 425,000 mmty of AO, lifting facility capacity to more than 1.3 mmty.

The Pennsylvania facility is being built on the banks of the Ohio River in Potter Township in Beaver County, about 30 miles from Pittsburgh.

“As a result of its close proximity to gas feedstock, the complex, and its customers, will benefit from shorter and more dependable supply chains, compared to supply from the Gulf Coast,” Shell said. “The location is also ideal because more than 70% of North American polyethylene customers are within a 700-mile radius of Pittsburgh.”

The project is expected to bring growth and jobs to the region, with up to 6,000 construction workers involved in building the facility and an expected 600 permanent employees when completed.

In the chemicals sector, Shell already has brownfield growth projects ongoing on the U.S. Gulf Coast and in China, he added. Once these projects are onstream early in the next decade, Shell’s ethylene capacity should reach about 8 million metric tons/year (mmty), compared with 6.2 mmty today.

“Selective growth” is key until the economics of some of its longer-term projects makes sense, revolving around the “cash engines” of the petrochemicals sector and deepwater activity, van Beurden said during the Capital Markets Day conference. When he took over last year, van Beurden said Shell could cancel up to 40 projects within three years, and on Tuesday he affirmed that Shell may pull its entire business operations from up to 10 countries by 2018.

The revamped strategy is for “stable businesses, which underpin the financial delivery of the company today,” said the CEO, formerly Shell’s petrochemicals chief. “They should have strong and resilient returns and free cash flow, to fund dividends and the balance sheet well into the next decade and beyond…Through-cycle returns here should be attractive and competitive.”

Beyond 2020, unconventionals in North America and Argentina, as well as “low-carbon” biofuels, solar and wind power, are to become growth priorities.

Gov. Tom Wolf, whose Democratic administration has sparred frequently with the oil and gas industry, acknowledged that initial work on the Shell facility began four years ago under the administration of former Republican Gov. Tom Corbett.

“Since first taking office, I have worked in close collaboration with my Secretary of Community and Economic Development Dennis Davin, the Pittsburgh Regional Alliance, local officials in Western Pennsylvania and Royal Dutch Shell to make the proposed plant a reality,” Wolf said. “The commonwealth engaged the company with the goal of creating jobs, spurring economic development, and taking the next steps to connect the energy industry with long-term, sustainable economic growth.”

Wolf said his administration “is committed to creating jobs in the energy industry through responsible, well-regulated extraction and long-term, creative industrial growth. We have worked to develop strategies for safe and responsible pipeline development that brings resources to markets and facilities, and we have prioritized the Shell plant to show the world that Pennsylvania is a leader in energy manufacturing and downstream production.”

The project’s success “is part of a much-needed, longer-term plan to translate our abundant resources to make Pennsylvania a leader in downstream production. The commitment of the Shell cracker plant in Western Pennsylvania is an important step toward this goal,” the governor said.

“Shell’s decision to move forward with this world-class facility, which will put thousands to work across our region through utilizing clean-burning domestic natural gas for decades to come, is welcomed news, especially given the challenging market conditions,” said Marcellus Shale Coalition President David Spigelmyer. “This investment also reflects the fact that domestic manufacturing’s potential is near limitless thanks to our abundant and stable energy supplies from natural gas.”

Allegheny County Executive Rich Fitzgerald said the agreement by Shell was achieved through a collaborative effort by the “building trades and the United Steelworkers, the bipartisan support from the Pennsylvania house and senate, and the efforts of the Allegheny Conference and the Marcellus Shale Coalition… The project is monumental; the building of this plant will be equivalent to the construction of 25 stadiums. This announcement accelerates our growth to a next level and will provide even more opportunities for our young people.”

Allegheny Conference on Community Development CEO Dennis Yablonsky said the announcement signaled “Shell’s re-entry into the North American polyethylene market. The plant will be one of the largest of its kind in North America — the largest single ‘from the ground up’ industrial investment in the Pittsburgh region in a generation — and the first major U.S. project of its type to be built outside the Gulf Coast region in 20 years.”

The decision to move forward also is “a victory for U.S. manufacturing,” he said. “We believe that a capital investment of this magnitude indicates to other companies in the energy, petrochemical and plastics industries that southwestern Pennsylvania should be on their shortlist of locations for new facilities and expansions. That’s especially the case considering that polyethylene demand is forecasted to grow worldwide, with some analysts projecting it will rise 4% a year to 99.6 million metric tons in 2018.”

The cracker announcement is “another sign that a renaissance in American chemistry is under way,” American Chemistry Council (ACC) CEO Cal Dooley said. “Thanks to our nation’s abundant supplies of shale gas, the U.S. has become the world’s destination for new chemical industry investment. Our competitive edge will mean new jobs and exports and a stronger manufacturing sector for years to come.”

According to the ACC, as of this month 262 chemical industry projects valued at $161 billion are completed, under construction or planned for the United States, which could create $105 billion in annual output and 738,000 permanent U.S. jobs by 2023.