Western Canada-focused Pembina Pipeline Corp. painted a rosy outlook in its first quarter earnings report for a Canadian industry-wide recovery amid improving commodity prices, with volumes from the Montney Shale and the Duvernay formation expected to grow. 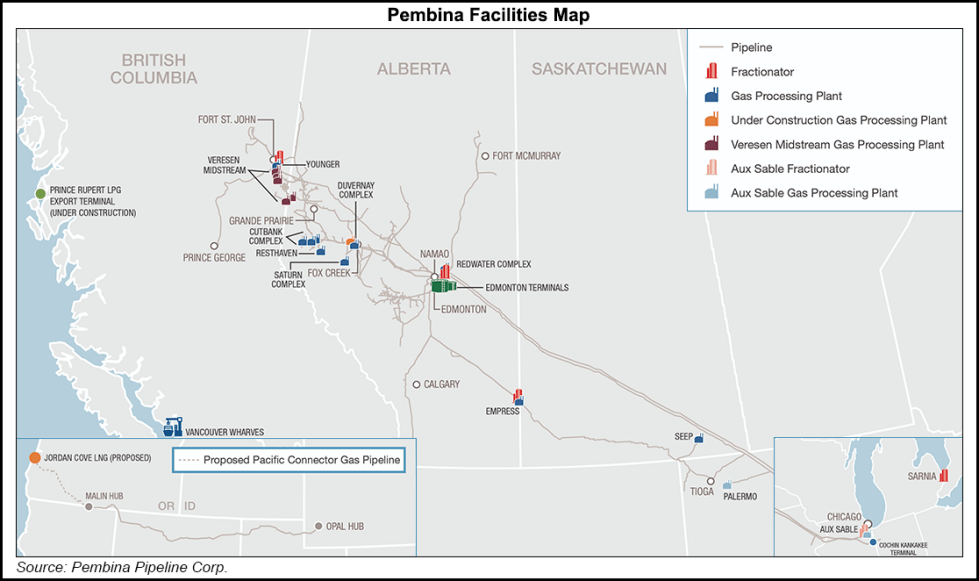 “Over the past few quarters, across both the pipelines and facilities divisions, we have seen steady increases in physical volumes, which reached pre-pandemic peak levels in April 2021,” Pembina said in its quarterly results.

The company said it had an optimistic view on Western Canadian Sedimentary Basin (WCSB) activity levels in light of improved commodity prices as well as the expected post-pandemic recovery.

“In particular, our business development activities are being informed by a promising outlook for volume growth” in the northeast British Columbia Montney and Alberta Duvernay areas, “both of which Pembina serves today,” the company said.

Pembina reported total volumes of 3.5 million boe/d in the first quarter, a 1% decrease over the same period a year ago. The company attributed the decline to reduced upstream activity in 2020.

The pipelines division logged 2.6 million boe/d in the first quarter, a 2% decline year/year. However, the facilities division booked volumes of 895,000 boe/d, a 2% increase year/year due to higher supply volumes at its Redwater fractionator and incremental revenue volumes associated with its Duvernay III gas processing facility being placed into service in November 2020. Both facilities are located in Alberta.

On the NGL side, volumes of 221,000 boe/d in the first quarter represented a 13% increase compared to the same period in the prior year.

“Marketed NGL volumes increased as Pembina continued to monetize storage positions that were built up during the second and third quarters of 2020, when commodity prices were lower, combined with increased supply volumes at the Redwater Complex,” Pembina said.

During the quarter, the company completed a British Columbia propane export facility with capacity for 25,000 barrels daily of propane. The closely watched project was hailed by local and national politicians as an important milestone for Canadian energy exports.

A one-year overseas cargo contract with a Mitsui & Co. subsidiary kicked off tanker sailings from the new Prince Rupert Terminal.

Pembina dropped all references to its stalled liquefied natural gas (LNG) proposal on the Oregon coast, Jordan Cove LNG, from its quarterly report  following years of community opposition and adverse decisions by state and federal regulatory agencies. The firm previously deferred Jordan Cove LNG and booked an accounting loss. Pembina reported 2021 first-quarter earnings of C$320 million ($256 million) on its processing, pipeline and marketing network, up slightly from C$319 million ($255.2 million) in the same period of 2020. Per-share earnings were unchanged at 51 Canadian cents (41 cents).