The Organization of Petroleum Exporting Countries (OPEC) on Tuesday held to its forecast for relatively robust oil demand in 2021, driven by expectations for increased economic activity and travel in the second half of the year. 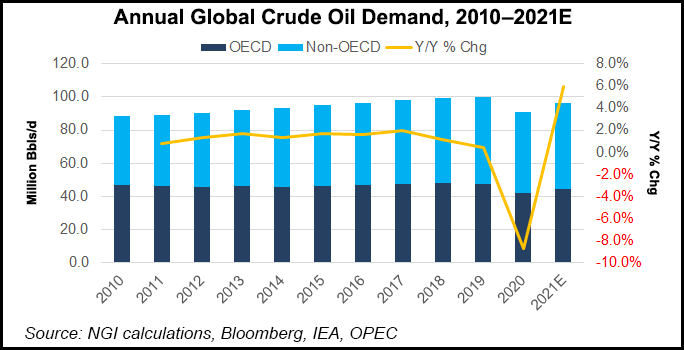 The cartel noted that coronavirus inoculation campaigns are gaining rapid momentum across North America, Europe and much of Asia. This is expected to diminish the impact of the pandemic and, in turn, unleash pent-up demand for fuels derived from oil as more people get back to work and travel.

For 2021, world oil demand is expected to increase by nearly 6.0 million b/d from 2020, or 7%, to average 96.5 million b/d. OPEC issued the forecast in its closely watched Monthly Oil Market Report (MOMR). Its global demand estimate is unchanged from the prior month’s estimate.

The Saudi-led cartel, however, increased by 200,000 b/d its demand expectations for OPEC-produced crude. Its researchers pointed to anticipated modest declines in U.S. output this year, primarily due to the Gulf Coast disruptions caused by Winter Storm Uri in February. OPEC estimated demand for its oil would average 27.7 million b/d this year, up. 5.2 million b/d from 2020.

Researchers said in the MOMR a resurgence of coronavirus cases in India, Brazil and other countries kept demand in check early this year. However, OPEC said “positive transportation fuel data from the U.S. and acceleration in vaccination programs in many regions provides further optimism” for the back half of 2021. “The assumed return to some degree of normality and improved mobility is also expected to positively affect” other regions, including the Middle East.

In the United States, the latest report from the U.S. Energy Information Administration showed domestic production averaged 10.9 million b/d in the final week of April, flat with the prior week and down about 1.0 million b/d from the year-earlier level.

Total petroleum demand, lifted by a recovery in gasoline consumption, was notably stronger than it was amid the immediate throes of the pandemic last spring; it was about 30% higher in the April 30 week from a year earlier, EIA said.