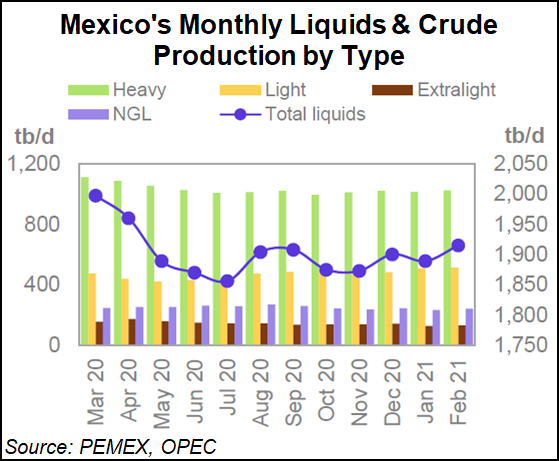 The projected increase is due to the startup of the first phase of the Pokoch-Ichalkil fields with peak capacity of 100,000 b/d. As a result, Mexico’s oil supply is expected to grow by 10,000 b/d and average 1.92 million b/d in 2021, OPEC researchers said.

“In mid-March, Pemex announced the discovery of a billion-barrel oil field in Tabasco state located at the southern part of the Gulf of Mexico,” OPEC researchers said. “This discovery, along with the recently discovered Quesqui gas and condensate field with 900 million bbl, aims to reverse a decade of production declines.

“While Pemex has discovered significant volumes in recent years, even more production is needed to offset natural declines.”

The recovery of Mexico’s economy this year “depends in large part on the fate of [Pemex],” according to a new issue brief published by Rice University’s Baker Institute for Public Policy.

Authors Tony Payan and José Iván Rodríguez Sanchez wrote that, “Pemex could become an important input for the economy if oil prices went up dramatically, but this would also depend on worldwide recovery. For now, however, it is a drag on the country’s gross domestic product.”

Moody’s Investors Service analysts are forecasting 2021 prices to average in the middle of their forecast range of $45-65/bbl.