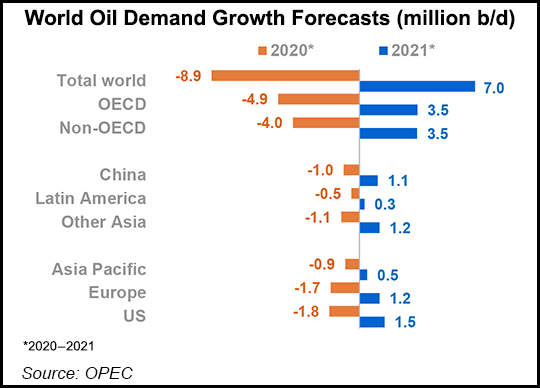 The Organization of the Petroleum Exporting Countries (OPEC) said last Tuesday it expects Mexico’s liquid hydrocarbons production to stay flat year/year at 1.9 million b/d in 2020 before falling to 1.8 million b/d in 2021 because of the natural decline of oilfields operated by national oil company Petróleos Mexicanos (Pemex).

Although the government has pledged to reverse years of declining output from legacy fields by accelerating investment in a set of “priority fields,” analysts have questioned the viability of this plan, and noted that most of these assets are unprofitable at current oil prices.

Pemex has managed to stabilize falling production since President Andrés Manuel López Obrador took office in December 2018, but has generated staggering financial losses while doing so.

Pemex is scheduled to publish its official June production figures on July 28.

The other project is the shallow water Hokchi field, where operator Pan American Energy LLC secured approval in 2018 for a $2.5 billion development plan that is to include seven producing wells and seven injector wells, along with an onshore oil and gas processing facility.

After a deep contraction in 2020, oil supply beyond OPEC member countries is expected to grow by 920,000 b/d in 2021, driven by gains in the United States, Canada, Brazil and Norway, OPEC said. These increases, however, would be offset by declines in Mexico, Egypt and Thailand.

The agreement between OPEC and its alleles, aka OPEC-plus, had mandated that Mexico cut production by 100,000 b/d in May and June from a baseline of 1.753 million b/d, as part of 9.7 million b/d in total cuts pledged by the Saudi-led cartel to balance a severely oversupplied global market in the wake of Covid-19.

OPEC-plus, meanwhile, has agreed to ease the coordinated cuts to 7.7 million b/d for the August-December period from the May-July amount of 9.7 million b/d.

Mexico Energy Minister Rocío Nahle, reportedly said in El Financiero last week that the country has agreed not to exceed production of 1.758 million b/d through 2020, information that had not previously been divulged. That would contrast with recent comments by President Andrés Manuel López Obrador.

Mexico was the only party to the OPEC-plus deal that did not agree to extend the May and June production cuts into July. López Obrador had said in June there would be no more curtailment by Mexico to the end of the year.

The decision announced last week by OPEC-plus to start turning the taps back on comes amid a tightening of the global supply/demand balance as large economies reopen following the first wave of Covid-19.

The OPEC-plus Joint Ministerial Monitoring Committee (JMMC) said compliance to the output cuts in June by the alliance as a whole was 107%, highlighting additional voluntary cuts by Saudi Arabia, the United Arab Emirates and Kuwait.

However, countries that failed to meet their allotted cuts in May and June must submit compensation plans to the OPEC Secretariat by the end of July explaining how they will meet the remaining balance of their assigned cuts during the July-September period.

“In the case of Iraq, we believe that the target set to compensate the alliance is overambitious given Iraq’s dire economic need for oil revenues right now,” the analyst said. “Getting the country’s production below 4 million b/d will be an uphill battle.”

Continued regional outbreaks of the pandemic add another layer of uncertainty to the oil market rebalancing.

Analysts at Raymond James & Associates Inc. noted on Thursday that India’s Bihar state, with a population of 125 million, was entering a two-week lockdown, “this being by far the largest of the ‘lockdowns 2.0’ that we have seen this summer.”

The pandemic continues to rage in the United States as well, where the death toll was approaching 141,000 as of Monday, according to Johns Hopkins University.

Despite the pandemic, the Energy Information Administration (EIA) reported a draw of 11 million bbl on U.S. commercial petroleum inventories for the week ended July 10, versus analyst estimates of a 1.2 million bbl draw, the Raymond James analysts said, a bullish signal for oil prices.

However, “Having worked their way up from the epic trough set in April,” U.S. oil prices remain “stalled around the $40 level amid mixed signals on the pace of global economic recovery,” the Raymond James team led by Pavel Molchanov said.

“Covid-related disruptions in transportation and economic activity have largely subsided, but as shown by headlines in recent weeks from around the world, there are more instances of governments pausing or even reversing the reopening process.”

Even more concerning than the current Covid headlines, analysts said, is the potential impact on demand of a second wave of the virus this winter in North America.

When OPEC-plus first announced the curtailments in April, the alliance said the 9.7 million b/d cuts would apply to May and June, before tapering to 7.7 million b/d in July.

However, delegates in June agreed to extend the May and June cuts through July in response to the still sizable Covid-induced supply imbalance.

The next meetings of the OPEC-plus Joint Technical Committee and the JMMC are scheduled for August 17 and August 18, respectively.