Mexico’s heavily indebted state oil company Petróleos Mexicanos (Pemex) couldn’t catch a break in the first quarter as hard-fought oil and gas production gains were completely undone by the depreciation of the peso and the tumbling price of oil. 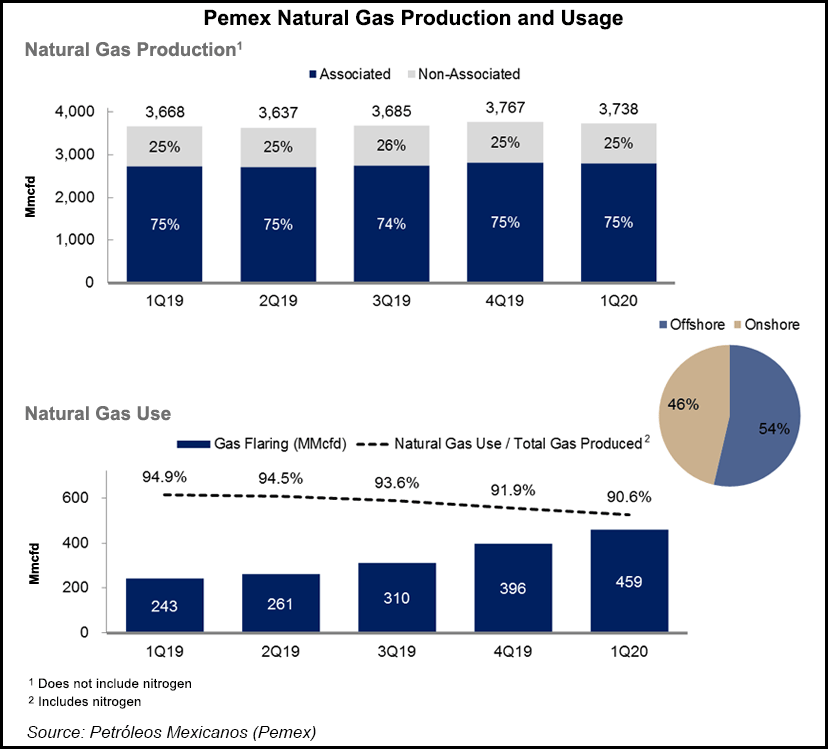 These gains, welcome news after years of falling oil and gas production in Mexico, did little to soften the blow of collapsing prices and a depreciating currency in part because of the global economic impacts of the coronavirus.

The Mexican crude oil basket averaged $40.9/bbl in the quarter, down 38% compared from a year ago.

“This decrease in the price of crude oil is the most relevant variable that affected the company’s export sales in the first quarter,” said CFO Alberto Velázquez in an earnings call.

While the valuation of debt balances is impacted by the depreciation, it does not impact cash flow, Velázquez said.

Executives also highlighted the support given by the government to strengthen the oil company’s financial position, including a new fiscal relief decree pertaining to the profit-sharing duty, or DUC by its Spanish acronym, which accounts for 80% of Pemex’s direct fiscal burden. It should amount to 65 billion pesos ($2.7 billion) in savings this year.

Pemex expects it will receive 7.5 billion pesos ($311 million) for its oil hedge contracted for 2020.

In total, measures instituted by the government to mitigate the impact of falling oil prices on the balance sheet and liquidity amount to 156 billion pesos ($6.5 billion), executives said.

In exploration and production, the so-called “priority fields” touted by Pemex as being key to new production added a total of only 46,000 b/d of new output by the end of March. The slow going was attributed to delays in needed infrastructure, bad weather and operation problems in well drilling.

Additionally, according to the terms of the recent agreement with the Organization of the Petroleum Exporting Countries, Mexico will have to reduce production by 100,000 b/d in May and June.

In addition, Mexico’s refining sector continued to underperform, even as it charges ahead in building the $8 billion Dos Bocas refinery in Tabasco. Crude oil processing at the nation’s six refineries fell to 542,000 b/d from 559,000 b/d in the year-ago quarter. Executives attributed the fall to ongoing maintenance works at the refineries.

As to the impact of a recent ratings downgrade on Pemex debt to “junk” status, Velázquez said that it was because of the “repercussions of the worldwide health crisis caused by Covid-19.”

He added: “It’s worth reiterating that Pemex has the absolute support of the Mexican government.”