Oman and Iran have agreed to revive an offshore pipeline project that would see Iranian natural gas exported via Oman’s LNG facilities, which have been working to boost capacity amid strong global demand. 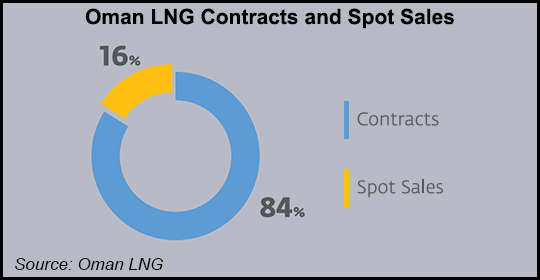 “Oman LNG intends to work with many partners to promote and develop the energy sector in Oman, including reviving a subsea pipeline project to deliver gas from Iran to Oman,” Chairman of Oman LNG, Talal bin Hamid al Awfi said in June.

The countries signed a memorandum of understanding in 2013 to build a 125-mile pipeline  from Iran’s Kuh-e Mobarak to Oman’s Sohar port.

Iran has no liquefied natural gas export facilities. It had planned to export around 10 billion cubic meters annually, or roughly 353 Bcf, to Oman starting in 2008 for 15 years. Under that arrangement, half the gas would have been diverted to Oman’s domestic market and the remaining 50% would have fed the Qalhat LNG export facility.

Increasing political tensions between the two countries and international sanctions against Iran stymied the deal.

Sanctions and politics could still make it difficult to develop the project. Iran has little gas to spare for export since nearly all the gas produced by the country is needed for domestic demand. Parts of the pipeline would also be in deep water (1,600-3,600 feet) of the Persian Gulf, requiring modern technology.

But following social unrest and high unemployment during the pandemic, Oman supports the project for its economic value.

Oman plans to renegotiate all its sales contracts which are set to expire in 2025, and like other LNG producers, is looking to increase production to meet rising demand since Russia reduced gas exports to Europe.

Once completed, BP plc’s 1.5 Bcf/d Khazzan tight gas project would have the capacity to meet around 30% of the country’s domestic gas demand, freeing up additional volumes for export.

A booming LNG market has also helped Oman increase revenues and exports. Oman’s LNG exports rose by 8% year/year during the first half of 2022, as Oman increased deliveries to Asian buyers.

Oman exported 5.9 mmt of LNG between January and June, compared to 5.5 mmt over the same period last year. The Oman LNG terminal is operating at its full annual capacity of 11.4 mmt after reducing bottlenecks last year at the liquefaction plant in Qalhat, located south of Muscat.

Nearly 40%, or 2.25 mmt of Oman’s LNG exports for the first half of the year were delivered to South Korea. Japan received 1.51 mmt, and the remaining 2.19 mmt was sold to China, India, Taiwan and Thailand.