As major economies across the globe emerge from the doldrums of the pandemic and travel surges, oil prices could further spike and reach $100/bbl by next year, according to the most bullish Wall Street forecast yet this year. 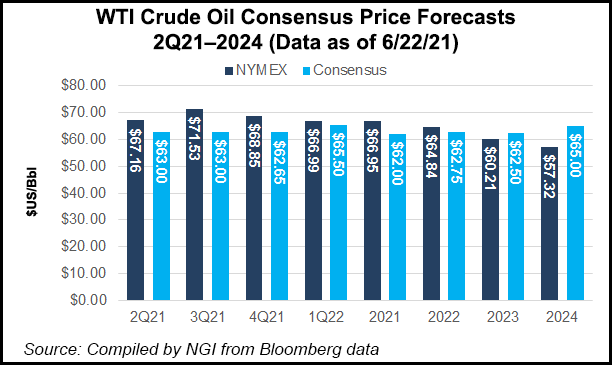 It could also mark the final surge in oil prices, however, as pressure intensifies on energy companies and governments to transition away from fossil fuels, oil in particular.

Oil prices slumped in 2020, hampered by demand destruction due to coronavirus outbreaks and restrictions imposed to blunt the pandemic. However, inoculation campaigns across the United States and major economies in both Europe and Asia – including China – have proven successful and economic activity is quickly rebounding.

Bank of America Corp. (BofA) analysts said this week an accompanying spike in travel this summer and into next year should put upward pressure on oil prices, with Brent crude potentially peaking at $100/bbl in 2022. The analysts expect consumption of travel fuels derived from oil – gasoline and jet fuel – will outstrip supply in the second half of 2021 and continue to do so early next year.

Brent futures eclipsed $75/bbl in intraday trading Monday, hitting a two-year high and marking a 45% jump since the start of 2021. West Texas Intermediate prices are up nearly 50% on the year and have hovered above $73 this week.

Blanch noted that even as demand rises, U.S. production is only inching back up. Global output remains well below pre-pandemic levels and will take several months to climb back. The supply/demand imbalance should support a continued upward trend in prices, he said.

The Organization of the Petroleum Exporting Countries and its oil-producing allies, aka OPEC-plus, are currently adding more than 2 million b/d into the market. The process started in May and is scheduled to carry through July. The group, however, expects global oil demand to increase by about 6 million b/d in the second half of this year, exceeding supply growth.

She noted, however, that if prices spike to the level forecast by BofA, travel fuels could reach unaffordable levels, curbing demand and economic activity.

“For the moment, demand is back and is expected to remain strong on the global enthusiasm that we are getting closer to the end of the pandemic,” Dickson said. “But at some point, demand and supply have to balance to make sure the market doesn’t shoot itself in the foot.”

Boston Consulting Group (BCG) analysts, meanwhile, agreed in a June report conditions are ripe for an oil price boom. But they said it could mark the beginning of the end for crude’s heyday.

Energy transitions are already underway around the globe as government policymakers and companies seek to curb emissions and tackle climate change. This will soon slow the rate of growth in demand, the analysts said.

“The impact of this next, and likely final, boom in oil prices will be significant, and it will accelerate the transition to a more sustainable global economy,” said BCG’s Jamie Webster, a senior director. “A rise in prices, coupled with post-pandemic stimulus targeted at rebuilding in a more environmentally friendly way, will see many countries step up investment in renewable energy and electric-vehicle charging networks.”