The Marcellus Shale is a “solidly economic” shale play that could play a big role in the export of liquefied natural gas (LNG) from the United States to Europe and Asia, but regulatory hurdles, stiff competition and market forces are all significant obstacles, according to two energy industry experts. 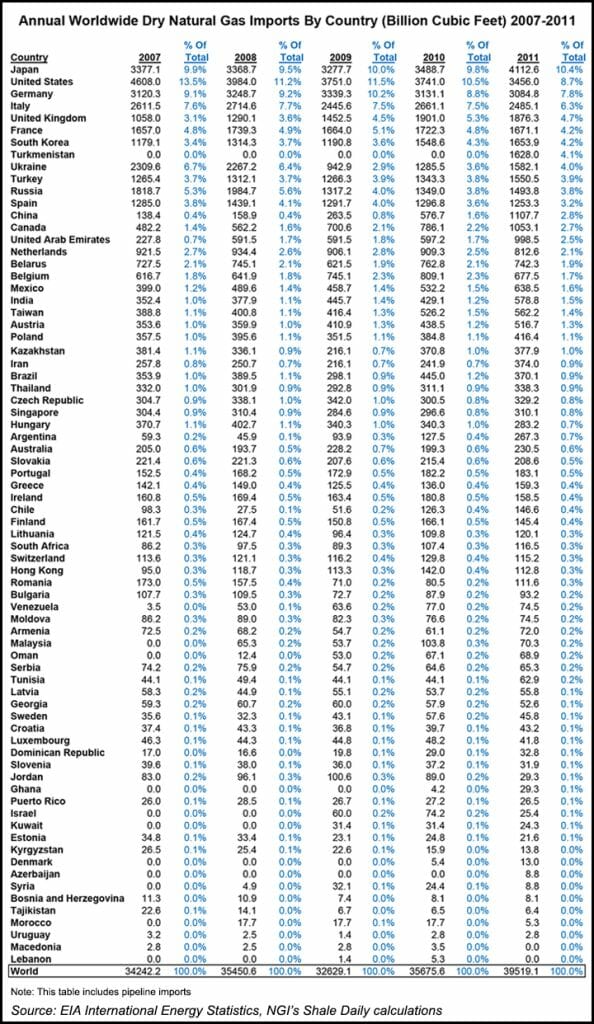 Donald Raikes, vice president of Dominion Transmission Inc., told attendees of Hart Energy’s DUG East Conference in Pittsburgh that “there is a global market [for exported LNG], but it’s not unlimited.”

Several companies are seeking permission to export LNG from the Federal Energy Regulatory Commission (FERC), including Dominion Cove Point LNG LP, which has proposed a $2 billion liquefaction project to convert natural gas from the Marcellus and Utica shales into LNG for export from its terminal in Lusby, MD (see Shale Daily, Oct. 2; April 19).

“We’re in competition to serve both the Japanese and the European markets,” Raikes said Thursday.”At the end of the day, there will only be a portion of those projects [before FERC] that will go forward.”

Raikes cited what he called a “middle of the road” report conducted by Deloitte MarketPoint LLC in 2011, which projected that natural gas prices in the Marcellus would only climb 10 cents/MMBtu if regulators approved the export of 6 Bcf/d of LNG.

“In terms of 6 Bcf/d, when you look at a 70 Bcf/d domestic market and you look at the production that we have today, all of those things factored together say there will not be a significant [price] increase for residential or manufacturing.

“But if you’re a producer, and you see that you can get 10 cents/MMBtu more a year on your production by this activity moving forward, I’m sure you’re going to love that. It’s a lot of effort for just 10 cents/MMBtu.”

Raikes added that the Panama Canal expansion project, which is scheduled to be completed in August 2014, was a factor not just for the Cove Point project but for all proposals to export LNG from the United States (see Shale Daily, Nov. 10, 2011).

“But people look at the fact that there was more than 20 Bcf/d of projects announced, and they assume that every one of those is going to go. The market can’t absorb that; today’s market is around 30-plus Bcf/d between the Pacific and the European Basin. Some subset of those will go forward.”

“We’ve got to see improvements in the U.S. economy and employment numbers before the federal government will probably let folks have an aggressive opportunity to export gas,” Coleman said. “Certainly it has to be one of the ways to add additional sites for demand and help balance the market out down the road.”

“We think that the Marcellus in northeast Pennsylvania is the best, at about 60% IRR [internal rate of return], and that’s based off the 10 Bcf/d wells for around $6 million,” Coleman said. “If you add in the liquids component that Range Resources Corp. is seeing in the southwestern portion, then you get about a 40% IRR, and that’s largely because you’ve got additional costs to process.

“It’s not surprising — covering Cabot Oil & Gas Corp., Range, Southwestern Energy Co., Ultra Petroleum Corp., EOG Resources Inc. and Devon Energy Corp., and guys like that — you look at the highest EBITDA [earnings before interest, taxes, depreciation and amortization] stories. Cabot and Range trade at the richest multiples because they’ve got the most economic gas out there.”

Coleman added that other shale plays aren’t held in as high regard as the Marcellus at the moment, but that could change.

“The gas play that’s been the biggest poster child for the excess of the 2007-2010 time frame is the Haynesville,” Coleman said. “The Haynesville has rolled over; it may have fallen a Bcf/d by now. There is opportunity for that play to come back, it’s just how many different options for gas — export, demand sources, fuel switching — can come up over the next one to five years is what will determine if the weather spike that we see coming this winter can be sustained over a three to five year period.”

Asked how much natural gas the United States should export or keep for domestic use, Raikes said, “there’s an opportunity to do both to some degree. On the market side, we’ve had significant worldwide interest in this play. When we go to foreign countries and we say the term ‘Marcellus,’ everybody looks up. There will be a balance, but I don’t know what that balance will be.

Raikes conceded that foreign competition would also be a factor in LNG exports. “You have some countries where they don’t have a use for the gas at all,” he said. “Some of those countries have governments that are very much pro-LNG [exports]. We compete a lot with Australia, but with Australia the costs are going up significantly in order to produce that product, even though they are very close to the Pacific Basin.

“We really need a clear policy — we’ve been waiting for more than a year — on what the rules will be as far how to get these projects approved and how much will get approved.”

Dominion received permission last October to export LNG from Cove Point to the limited number of countries that have free trade agreements (FTA) with the United States, but like other companies is still waiting for approval to export to non-FTA countries before it can add liquefaction to Cove Point (see Shale Daily, March 23; Jan. 31).

Dominion has said it could ship LNG to Asia for around $3.00/Mcf and to Europe for around $1.00/Mcf, both from Cove Point. The company expects Asian demand to double by 2030 as Japan shifts from nuclear to LNG, and European demand to also double over the same time frame, as countries seek alternatives to Russian and Norwegian gas supplies.