Natural gas futures flew higher again on Monday – up more than 30 cents early — as worries about global energy supplies intensified and bulls dominated U.S. trading ahead of front-month expiration. Traders took some profits in afternoon action, but the October contract still finished in the green and up more than 70 cents over its final two sessions. 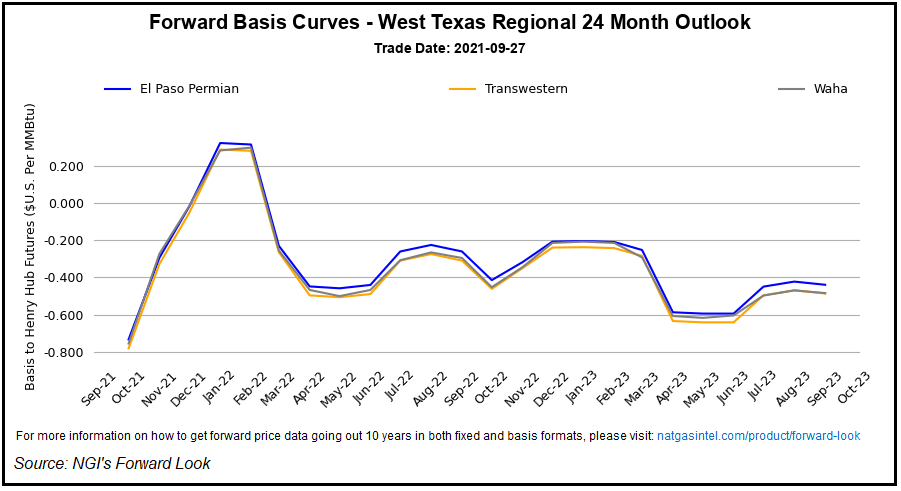 Following a 56.6-cent gain to start the week, the October Nymex contract on Tuesday rose another 13.5 cents day/day and settled at $5.841/MMBtu before rolling off the board. November, which takes over as the prompt month on Wednesday, gained 14.9 cents to $5.880.

NatGasWeather said Tuesday the major forecasting models still advertised a bearish pattern for the United States overall through mid-October – typical for this time of year. “We continue to look to the last 10 days of October for the first real threat of widespread freezing temperatures across the northern U.S.,” the firm said.

That noted, NatGasWeather pointed to supply/demand tightness in Europe and Asia – as well as customary buying ahead of expiry — as a key driver of soaring domestic prices. “We expect how high U.S. prices go will be dictated by whether Europe prices continue to rise, which is possible due to the potential for moderate to major issues there this winter,” the firm said.

Utilities in Europe and parts of Asia have for much of 2021 warned of lean supplies ahead of winter, when heating needs emerge in full force and gas demand typically spikes. This has fueled steady and elevated calls for U.S. exports of liquefied natural gas (LNG) levels, supporting prices. As winter draws closer, overseas energy challenges are fueling prices surges globally.

U.S. LNG feed gas volumes have held near record levels around 11 Bcf most of this year, interrupted only by storms and maintenance work. The energy crunch abroad began with robust draws from storage during large stretches of freezing conditions in Europe and northern Asia last winter. This was followed by a hot summer, unplanned supply disruptions and a pullback in production amid coronavirus outbreaks. Combined, Rystad Energy analysts say, these factors could threaten economic recoveries from the depths of the pandemic if consumers and businesses cannot afford gas to power homes and businesses.

In years past, power companies and industrial users would switch from gas to coal, but coal supplies are waning as countries around the world transition to cleaner forms of energy. The Rystad team expects more gas-to-oil switching, though oil prices also are surging amid rising demand and output that remains light relative to pre-pandemic levels. This, the analysts said, is raising concern about a broader energy crisis.

Brent crude, the international benchmark, is up more than 50% this year and has briefly topped $80/bbl this week. A big chunk of that increase developed this month alone.

“The more than $10/bbl upswing in Brent this month is a result of the imbalance between the returning demand and the tight supply,” Rystad analyst Louise Dickson said Tuesday. “Demand is also offering some more upside potential as winter approaches and the global energy crunch intensifies.”

“Large hedge funds forced to cover positions can drive market dislocations and jump-start rallies,” the EBW team said. “In this case, while a supportive fundamental picture underlies natural gas, it is possible that re-positioning was a spark that helped bring forward the anticipated rally from early winter.”

Looking ahead to Thursday’s U.S. Energy Information Administration (EIA) storage report, preliminary results of a Bloomberg survey ranged from injections of 84 Bcf to 89 Bcf, with a median of 86 Bcf. NGI modeled a build of 89 Bcf for the week ended Sept. 24

Spot gas prices soared for a second day, led higher by hubs in Texas and the nation’s midsection, where summer-like heat persisted on Tuesday.

Demand could fade as the week wears on, however, if forecasts for cooler air prove accurate.

“There will be a mix of light heating and cooling demand the next several days as weather systems impact the Northwest and Northeast with highs of 50s to lower 70s,” NatGasWeather said. While there was notable demand over the Plains and Texas Tuesday, with highs from mid-80s to low 90s, cooler air was expected to arrive by Wednesday as “a weather system exiting the Southwest tracks through with heavy showers.”

Looking into next week, mild conditions are expected over most of the Lower 48, the forecaster said. The “weather data will be viewed as bearish until colder weather systems push into the U.S., and that’s not likely until the last 10 days of October.”

Hurricane Sam, meanwhile, continued to churn as a powerful storm in the Atlantic. As of Tuesday afternoon, it remained far from land and any impact on the U.S. East Coast remained uncertain, NatGasWeather noted.

“There’s a few other tropical waves over the Atlantic Basin, which will require monitoring later in the week to see if there’s potential for them to track towards the U.S. next week,” the firm added.