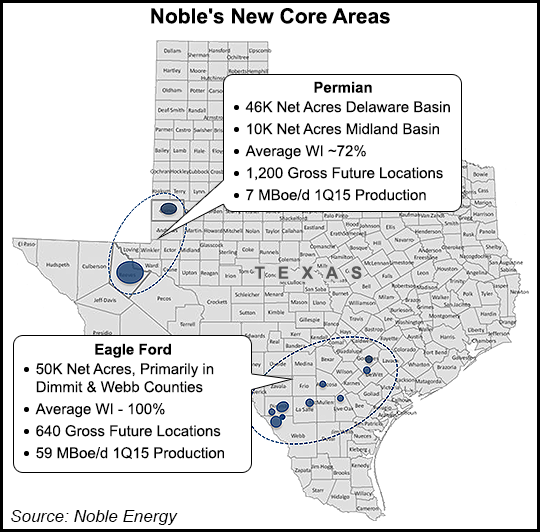 “The Eagle Ford and the Permian are premier unconventional resource plays, two of the most economic in the U.S., which will expand our resource base and development inventory and further diversify our portfolio,” said Noble CEO Dave Stover. “The transaction will be immediately accretive to our per share production, reserves, earnings, and cash flow.”

The Rosetta assets produced 66,000 boe/d in the first quarter, and year-end 2014 proved reserves were 282 million boe. More than 60% of Rosetta’s production and proved reserves are liquids, according to Noble, which said it expects compound annual production growth from the assets over the next several years to be about 15%.

“We believe that the assets would be well managed,” Wunderlich Securities Inc. analysts said Monday. “NBL has the balance sheet, the expertise, and the bandwidth to do a great job with these two properties.”

Rosetta has struggled during the commodity price downturn, and news from the company this year has been mostly about belt-tightening. In February Rosetta cut capital spending by 71% and said production would be 18% lower than previously thought as it was focusing on preserving balance sheet strength (see Shale Daily, Feb. 24).

Sterne Agee analysts wrote that the acquisition “…appears to be an inexpensive way for a new CEO to capitalize on a mid-cap E&P’s willingness to capitulate amid a tough commodity price cycle…an attractive way for the company to add substantial high-quality oil inventory, albeit in a somewhat scattered fashion.”

During a conference call to discuss the deal, Stover and other executives said the acquisition gives the company two new core areas — the Eagle Ford and the Permian — with “substantial running room.”

Stover said that because Rosetta management had been highly focused in both plays, there won’t be any need to “clean up” the holdings, clearing the way for development to begin. Revenue from the Eagle Ford will help fund the development to come in the Permian Basin, Stover said, and this will keep Noble from having to redirect capital from its existing operations to fund development in the new.

“Bringing this in and being able to grow this within its own cash flow won’t put any additional pressure on us,” he told analysts. “We’ll be able to maintain that. We’ll be able to maintain our liquidity and maintain our strong financial strength. The nice part about this…it enables us to bring in two high-quality core areas and still maintain our strength and financial position that will enable us to take advantage of developing these…and gives us the ability to accelerate when it makes sense.”

Wells Fargo Securities LLC wrote that the Delaware Basin acreage being acquired “is good quality acreage and undercapitalized;” however, the Eagle Ford, while still economic, is second tier and more weighted to natural gas.

“The deal will accelerate value delivery from our strong asset base, and the all-stock nature of the transaction will allow our shareholders to continue to reap that value growth across commodity price cycles,” said Rosetta CEO Jim Craddock.

In the United States Noble is active in the Denver-Julesburg Basin, the Marcellus Shale and the deepwater Gulf of Mexico. It also has positions offshore Equatorial Guinea and the Eastern Mediterranean (Israel and Cyprus). Last week the company slightly increased its full-year guidance and said it was shifting more of its capital to operations in Colorado (see Shale Daily, May 5).