A new multi-horizon oil play it has discovered in the Anadarko Basin offers wells with estimated ultimate recoveries (EUR) of 800,000-1 million boe, said Newfield Exploration Co., which has named the Oklahoma play STACK. 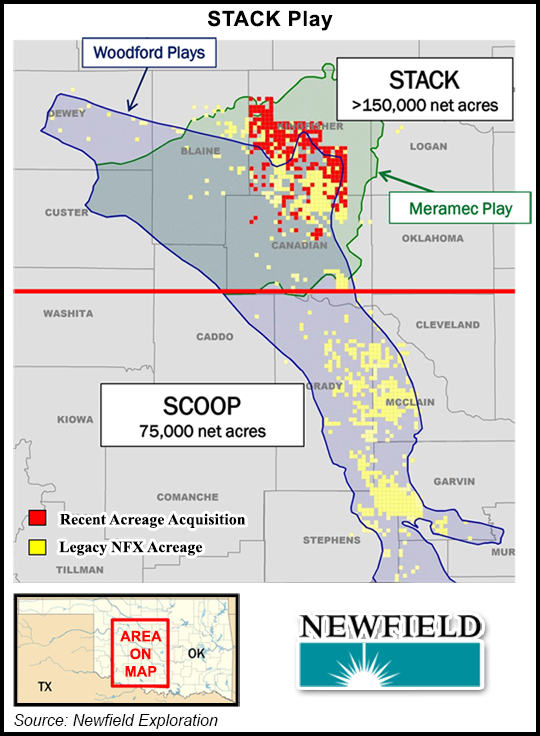 “Our early results in the STACK play are very encouraging, with initial wells providing about 35% rates of return,” said COO Gary Packer. STACK horizons include the Meramec and Woodford shales and range in depth from 8,000 to 11,000 feet.

“The primary producers are the Meramec Shale and the slightly deeper Woodford Shale. However, there are other perspective formations across our acreage as well,” Packer said during an earnings conference call Wednesday. “The Meramec is a Mississippian age shale that lies directly above the Woodford. It ranges in thickness from 275 feet to 475 feet across our acreage and has comparable porosity to the Woodford, and permeability is significantly greater in the Meramec. While Mississippian age, this play should not be confused with the lime play further to the north.”

“This play adds thousands of new potential drilling locations and expands our visible inventory in an area that we have a proven operational track record,” CEO Lee Boothby told analysts following the company. “We’re very excited about this significant expansion of our position in the Anadarko Basin.”

To date, Newfield has drilled seven wells in the STACK, with initial production rates averaging 900 boe/d and 30-day average production of 640 boe/d. Laterals are about 10,000 feet, and working interest averages 93%, the company said. Newfield is increasing its operated rig count in the Anadarko Basin to eight rigs, with at least two rigs dedicated to STACK development.

“STACK has the potential to more than double our unrisked resource potential in the basin and add thousands of new drilling locations,” Packer said.

“The type curve for our STACK and SCOOP [South Central Oklahoma Oil Province] plays are very similar. These early returns will only improve as we have shown time and time again that we can improve margins by lowering development costs, optimizing completions to enhance both production rates and EUR. This is an oil play, and we will be testing additional intervals and spacing in 2014 to determine our optimized plans.”

Newfield third quarter net income was $27 million (5 cents/share) compared with a net loss of $33 million (minus 24 cents) for the year-ago quarter, which was impacted by a derivatives loss and notes redemption.