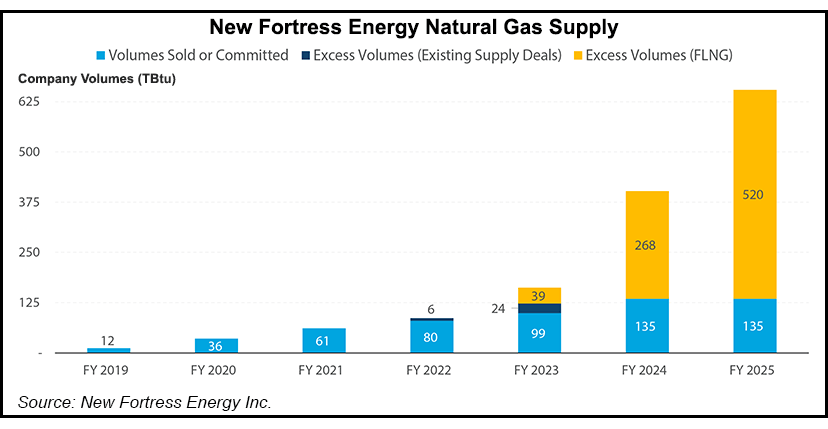 The company plans to file applications this summer for another six floating liquefaction facilities in the Gulf of Mexico (GOM) that could be deployed more quickly than conventional infrastructure. NFE has filed two applications for its Fast LNG technology in the GOM and ultimately expects to have 11.2 million metric tons/year (mmty) of capacity built and deployed.

“Fast LNG is really the industry changing application,” said CEO Wes Edens. “As I’ve said many times, the only commodity that you cannot buy is time.”

Unlike onshore facilities, which can take years to build, NFE is aiming to meet surging demand with its Fast LNG facilities. The technology uses smaller, modular liquefaction trains mounted on shallow-water jackup rigs or similar offshore infrastructure to liquefy gas. Management expects to have two units, each with a 1.4 mmty capacity, online by next year.

NFE also operates regasification terminals and natural gas-fired power plants that it purchased for LNG in the Caribbean and in South America. Projects are also under development in Europe and Asia. In addition to tolling agreements with offtakers, it has said its Fast LNG facilities could be used to serve its portfolio as well.

Edens said during a call to discuss first quarter results that he expects oil and natural gas supplies to remain tight for years to come.

NFE announced the filing of its applications days after the United States pledged more LNG for Europe as the continent looks to cut its reliance on Russian fossil fuel imports.

On Tuesday, the company said it inked a five-year charter for an FSRU with 6 MMcf to be used by The Netherlands’ NV Nederlandse Gasunie. The energy infrastructure company could use the NFE unit, along with others, at its new port-side LNG terminal at Eemshaven. The deal could wrap up in the next few weeks, according to NFE. Gasunie has said it is aiming to bring an additional 8 billion cubic meters/year of regasification capacity with the terminal.

Management noted that 18 floating storage and regasification units (FSRU) have been announced in Europe to help diversify supplies and bring in more LNG quicker. However, managing director Andrew Dete noted that the continent could need more than 30 FSRUs if it intends to fully displace Russian supplies.

NFE added shipping assets when it acquired Golar LNG Partners LP last year. The company owns seven FSRUs and has another two LNG tankers that could be converted, creating what Dete said are more opportunities to meet growing demand.

NFE has already seized on a growing appetite for LNG. The company projects that it could have 80 trillion Btu (TBtu) of natural gas committed or sold this year, up from 12 TBtu when it went public in 2019.

The company forecasts that it will have 135 TBtu of volumes committed or sold by 2025. Management also expects excess volumes of 520 TBtu from its Fast LNG facilities by 2025 that it could sell into a market expected to be short on the super-chilled fuel until larger facilities are built and brought online.

Revenue has continued to grow as operations have ramped up, reaching $505 million in the first quarter, compared with $145.7 million in the year-ago period.