Liquefied natural gas (LNG) is unlikely to play a significant role in decarbonizing maritime transport, according to a World Bank report. 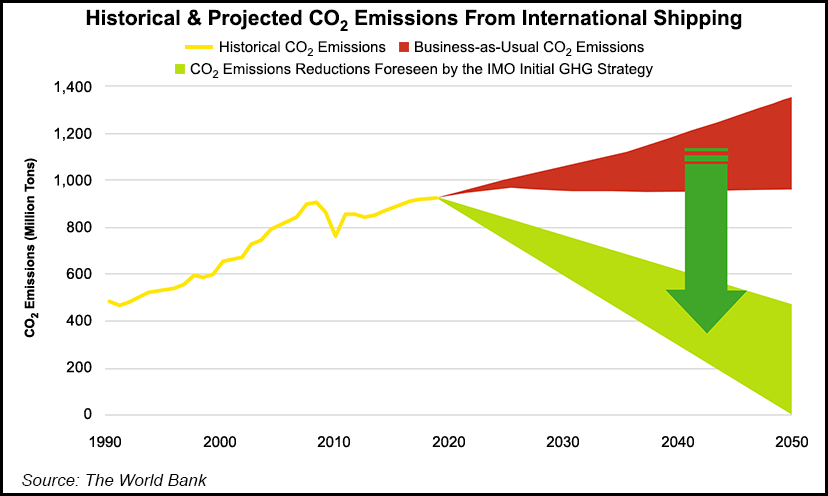 Ammonia and hydrogen produced from renewable electricity are more promising options as the sector works to cut its emissions to comply with international standards in the coming decades, the bank said.

The International Maritime Organization (IMO) has established the goal of reducing greenhouse gas emissions (GHG) from shipping by at least 50% below 2008 levels by 2050.

“This represents a major challenge for a sector that is almost entirely dependent on fossil fuels, in particular on heavy fuel oil, a highly viscous residual fuel that resembles tar and contains large amounts of carbon and sulfur,” the World Bank said.

According to the report, the maritime transport industry contributes 3% of the world’s GHG emissions and about 15% of its major air pollutants each year. LNG’s air quality benefits compared to oil-derived bunker fuels have it poised for an expansion throughout the sector, but the World Bank said natural gas is better suited to jump-start the use of zero-carbon maritime fuels.

The report examined the potential of LNG to play either a transitional role, in which existing LNG infrastructure and vessels could continue being used with compatible zero-carbon bunker fuels, or a temporary one, in which LNG would be replaced by cleaner alternatives after 2030, when zero-carbon fuels are expected to enter the global fleet and scale up.

Neither option is likely, the bank said.

For a transitional role, liquefied biomethane and liquefied synthetic methane are the only zero-carbon bunker fuels that could reuse existing LNG infrastructure, but neither is expected to have a significant share of the fuel market in the long term, according to the report.

“Moreover, not only are the GHG mitigation benefits uncertain, there are also considerable risks if countries and businesses invest in LNG infrastructure to meet the IMO’s climate targets, including unnecessary capital expenditures, stranded assets and technology lock-in.”

Rather than being burned as a bunker fuel, the World Bank said, natural gas could be combined with carbon capture technology to produce so-called “blue” hydrogen or ammonia to fill a perceived gap in the amount of renewable energy that would be needed to produce cleaner hydrogen and ammonia at scale.

But with enough capacity, green hydrogen and ammonia produced with renewable energy “strike the most advantageous balance of favorable features relating to their lifecycle GHG emissions, broader environmental factors, scalability, economics and technical and safety implications,” the bank said.

The bank also said that while biofuels and synthetic carbon-based bunker fuels have much potential in the shipping sector, ensuring large-scale supply is “likely to be constrained by the limited availability of, and competing demands for, sustainable biomass and lower cost competitiveness, respectively.”

The use of LNG and greener fuels in maritime transport were addressed in different reports as part of a World Bank series rolled out to demonstrate the opportunities being created by efforts to cut the sector’s emissions.

The reports also stressed the importance of “strategic policy interventions” to “hasten the sector’s energy transition and seize opportunities for wider economic, energy and industrial development in developing countries.”