Natural gas shale plays have become “relatively well delineated,” which is sending production costs south in many onshore basins, a trend that should continue as adequate infrastructure opens the door to more opportunities, according to Credit Suisse’s energy team. 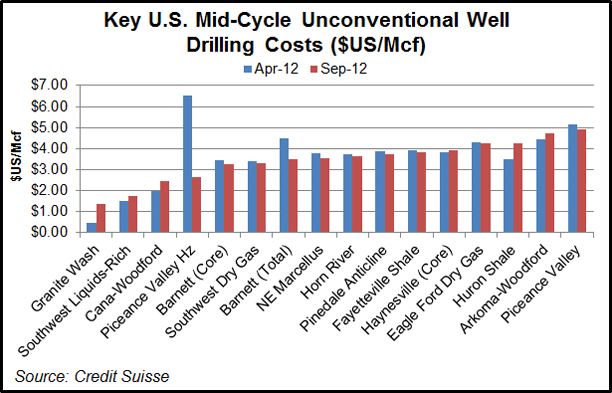 Ed Westlake, who is co-head of global oil and gas, contributed to Credit Suisse’s “Shale Revolution” report issued earlier this month (see Shale Daily, Dec. 19). New unconventional gas resources, he said, are “disrupting the cost curve of the natural gas industry (and oil to a lesser extent) and this means there will be losers,” with coal being the “biggest loser.”

Individual gas shale wells “break even at low prices” in many of the big North American plays, but “it takes a lot of upfront capital to secure attractive acreage, to do the science well, to delineate the best parts of the acreage, and then to build a material source of cash flow.

“Companies with high-cost gas acreage may struggle in this transition. Investors are more willing to focus on short-cycle projects exposed to the front end of the oil curve than to take a chance on longer-term projects, mostly in the offshore…” The “best leading indicator” to determine drilling activity “is the six-month rate of change,” said Westlake. The rate notes inflection points and measure whether and where activity is accelerating/decelerating, he said.

Credit Suisse compared basin-to-basin mid-cycle well drilling costs, leaving out finding and acquisition costs, in April to costs in September, finding some had increased while others had dropped.

Costs followed separate tracks in different parts of the Marcellus Basin from April to September with the Southwest liquids-rich horizontals, rising from $1.49 to $1.74, while the Southwest without liquids and the Northeast Marcellus dropped from $3.40 to $3.32 and $3.77 to $3.53 respectively.

Some changes were a little off the charts. In April the lowest-cost wells to drill were in the Granite Wash, 48 cents/Mcf, but they had almost tripled six months later to $1.37 — still the lowest for any basin analyzed. The highest costs in April were Piceance Basin Valley horizontal wells, which cost $6.53; by September costs had fallen to as low as $2.63.

“Given falling service pricing and improved efficiency, cost structure will be a key theme through the second half of 2012 and into 2013. Some exploration and production [E&P] companies have spoken to reduced costs in the Eagle Ford and in the Bakken. Given the stretched balance sheets across the independent E&P sector, any sign of costs easing would be a key positive catalyst for the group, particularly if macro confidence improved also.”

The declining gas costs can totally rewrite the book for sectors that rely, or can switch, to natural gas to fuel their operations, said Credit Suisse’s Mike Shillaker, head of Global Steel & European Miners.

“The U.S. could become the lowest-cost steel producer, a turnaround from those that went broke” he said.

Domestic manufacturer Nucor Energy Holdings has seen the light. In November Nucor increased its holdings in some of Encana Corp.’s U.S. gas wells as a hedge against an expected increase in prices. United States Steel Corp., based in Pittsburgh, had to restructure operations in the 1980s as steel became cheaper to manufacture overseas.

However, the steel manufacturer, the largest in the United States, has seen an upsurge in business and it is benefiting from gas production in the Marcellus Shale. CEO John P. Surma has called the Marcellus the best thing to happen to domestic manufacturers in the past 25 years.

Also benefiting from low well costs is the U.S. chemicals sector, said John McNulty, who heads Credit Suisse’s basic materials research. “We’ve seen an evolution of North America’s ethylene production cost profile, he said. “One of the biggest groups to benefit in the U.S. chemical space is ethylene production’s cost profile…And there is significantly more room to run ahead.”

According to McNulty, U.S. producers “have the ability to process at the lowest cost in the world. U.S. producers that can process natural gas liquids [NGL] — mainly ethane — have seen substantially lowered input costs and are in one of the most cost-competitive positions globally. The only regions lower on the global cost curve are Canada and subsidized Middle Eastern producers.”

The Credit Suisse team views the United States “as the most cost advantaged for new capital deployment, particularly with the Middle East being less flush with cheap natural gas, owing to higher production costs, less excess supply and/or regional moratoriums on drilling…and in the case of Iran, UN sanctions limiting their ability to get the equipment needed to produce from their reserves…”

McNulty said in 2016 and beyond, “we expect a slew of domestic capacity additions to come online, which may put some downward pressure on profitability as it tightens up the supply/demand balance for NGLs, mainly ethane.”