Global natural gas prices have turned volatile after a stretch of gains as traders watch variables in key markets from the United States to Asia. 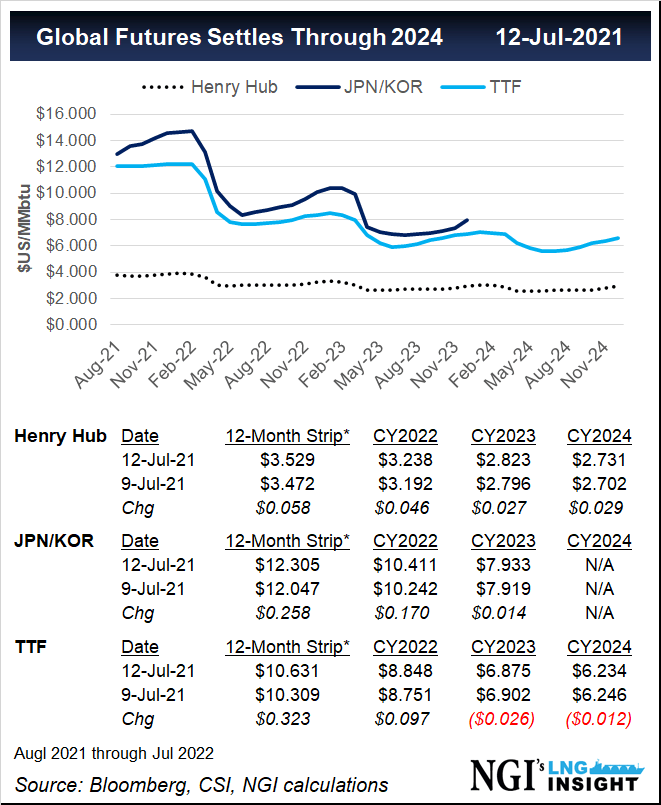 In the United States, the Henry Hub prompt contract finally retreated early last week after a nine-day winning streak. However, it spiked again by nearly 10 cents last Thursday (July 8) on a weak storage build before finishing lower to end the week.

Traders looked past a tilt toward cooler weather Monday and focused instead on near-term heat and expectations for strong domestic demand and U.S. exports over the balance of summer. That sent gas futures higher. The August contract shed 5 cents Tuesday to finish at $3.696/MMBtu, with similar losses seen across the forward curve.

Cameron LNG in Louisiana shut one of its three liquefaction trains for maintenance on Monday, but it was expected back online by Tuesday. Feed gas deliveries dipped to about 10.46 Bcf/d as the week got underway and were hovering near that level on Tuesday. However, nominations to the Cameron terminal were up slightly, according to NGI’s U.S. LNG Export Tracker.

The market has also been on a seesaw in Europe. Dutch futures finished last week higher as storage inventories on the continent remain low and Asian liquefied natural gas (LNG) prices remain high enough to lure cargoes away from Europe.

Statements by Nord Stream 2 AG CEO Matthias Warnig also moved the market lower Monday. He told German newspaper Handelsblatt that both legs of the 5.3 Bcf/d system planned to move gas from Russia to Germany would be online by the end of the year. Testing has already started on the first leg of the project, Warnig reportedly said. Only 2% of construction remains on the second leg.

By Tuesday, prices had jumped higher as both the Title Transfer Facility and National Balancing Point contracts gained across the curve. Further volatility is likely this week as the European Commission is slated to unveil a climate policy package on Wednesday aimed at reducing emissions by 55% across the continent by 2030 from 1990 levels.

In Asia, meanwhile, spot prices were assessed above $13/MMBtu, down by about $1 from a week ago. Demand still remains strong in the region, but higher prices have sidelined some buyers from the spot market.

Oil prices, to which many LNG contracts are linked across Asia, have also climbed higher as uncertainty persists over production from the Organization of the Petroleum Exporting Countries and its allies. Saudia Arabia and the United Arab Emirates remain at odds over output, creating concern over falling inventories as global demand increases. Brent for September delivery gained by more than $1 to finish Tuesday at $76.49/bbl.  Buyers in Asia were also likely watching reported maintenance issues at Woodside Petroleum Ltd.’s North West Shelf export facility in Australia. The company found corrosion issues during maintenance and has requested that some LNG shipments for prompt delivery be delayed, according to Bloomberg.