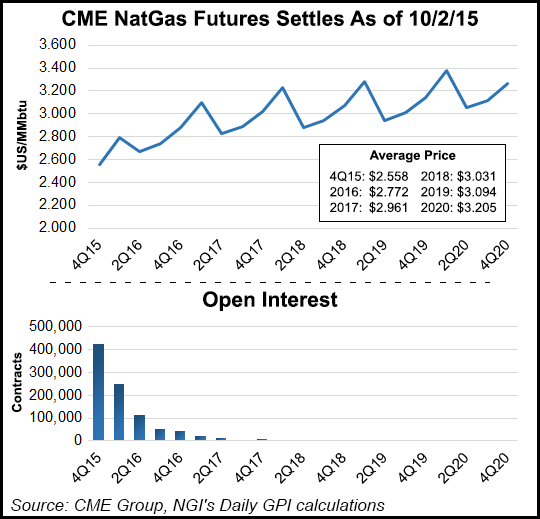 The forecasts are below the Energy Information Administration’s, which in early September said it expected 2016 prices to average $3.11 (see Daily GPI, Sept. 9).

Under Raymond James’ current model “gas supply growth should increase 1.2 Bcf/day higher year/year even with sub-$2.50/Mcf prices and lower rig count assumptions,” wrote analyst J. Marshall Adkins and his colleagues. “Relative to our previous model, our estimate for industrial demand growth is decreasing by 0.5 Bcf/d, and our weather-related gas demand assumption also falls by 0.9 Bcf/d” because of 10-year “normal” weather pattern rather than 30-year patterns.

The more bearish outlook also is because of increased pipeline takeaway capacity from the Marcellus/Utica shales, Adkins said, which could allow domestic gas supplies to grow as much as 2 Bcf/d versus a previous estimate of 0.6 Bcf/d.

“Furthermore, our optimistic view of increased demand from industrial gas consumers has been undermined by recent data that actually shows falling 2015 U.S. industrial gas demand even in the face of more petrochem-related projects coming online,” he said.

Raymond James originally had estimated that industrial gas demand would be higher because of specific petrochemical capacity additions beginning this year. However, actual industry gas demand data to date has been “extremely disappointing.” Raymond James had forecast about 0.75 Bcf/d of U.S. industrial demand growth this year, but so far, “the actual data is pointing to about a 0.5 Bcf/d decline” brought about in part because of weak U.S. steel demand because of less expensive Chinese imports; weak oilfield demand for heat-treated pipe; and abundant propane/ethane as a substitute for dry gas.

“Our previously bullish call on 2016 gas followed years of being gas bears and was based on our recognition of moderating Northeast growth, which is still ongoing, combined with declining associated and dry gas volumes,” which already are being seen, TPH said.

Even though Northeast supply growth is decelerating, “absolute volumes have surprised to the upside; a drop in coal price has lowered switching economics; and industrial sector demand has been weaker than expected,” off about 500 MMcf/d versus TPH’s forecast.

Weather forecasters also are lining up around warm winter weather because of El Nino, which they see as an increasingly likely event.

“A winter 10% warmer than average would require a TPH estimated full year gas price 40 cents/MMBtu lower than our baseline forecast to keep storage levels in check,” TPH said. By comparison, the winter of 2011-2012 was 14% warmer than average and the “last strong” El Nino in 1997-1998 was 7% warmer.

The ugliness in U.S. gas prices would impact domestic exploration and production (E&P) companies, too, said Raymond James. Because capital budgets and rig counts likely would be reset “we are lowering our 2016 E&P spending and U.S. rig count assumptions meaningfully,” Adkins said. “We now expect 2016 U.S. E&P spending to be down about 35% (versus our prior expectation of a 3% increase) and the average 2016 U.S. average rigs to fall about 30% to 700 average rigs (from 966 average rigs in 2015).”