Could a change in natural gas trading behavior be amiss? Bears on Monday managed to take out a key psychological level of support amid robust supply and a steadily improving storage picture. The November Nymex gas futures contract settled at $6.435/MMBtu, off 31.3 cents from Friday’s close. December futures slid 26.3 cents to $6.784. 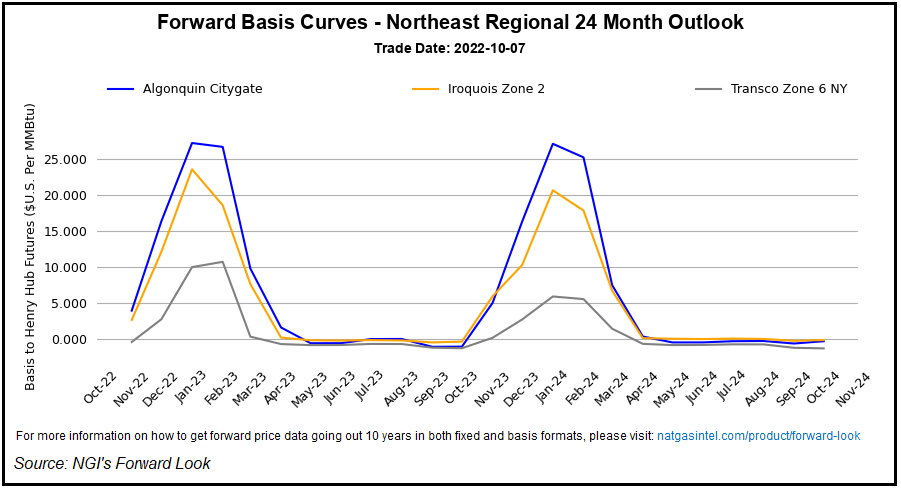 Spot gas prices posted a mix of moderate gains and losses, with the exception of the Northeast, where next-day gas was sharply higher. NGI’s Spot Gas National Avg. edged up 7.5 cents to $5.550.

With production near 100 Bcf/d and little in the way of weather demand to significantly move the price needle, bulls had a hard time maintaining the early price gains they achieved early in Monday’s trading session. Weather models over the weekend were a little chillier with a mid-October cold front sliding into the northern United States, as was expected. However, even with the added projected demand, the pattern was far from bullish, just not as bearish as the data showed Friday, according to NatGasWeather.

The Global Forecast System’s midday run, meanwhile, trended slightly warmer by not seeing quite as chilly the weather system advancing into the Midwest and Northeast early next week, the forecaster said. Until then, demand is expected to be light through Thursday before a cool shot exits the Northern Plains and tracks across the Great Lakes, Ohio Valley and Northeast Friday-Sunday for a minor bump in national demand.

A reinforcing cool shot is set to follow but is now warmer based on the latest models. In fact, much of the weather data continues to favor mostly mild weather through the Oct. 20-23 period, although cooler trends could show up in time to add several total degree days/Bcf in demand, according to NatGasWeather.

“We thought it would be of interest to see how natural gas prices traded” on Monday after adding several heating degree days on cooler trends over the weekend, the forecaster said.

The firm also questioned whether any early price gains would be sold “since it seemed like there was potential there had been a change in recent trader behavior, where rallies were being sold instead of dips being bought. And after a higher open, prices indeed since sold off, while also taking out strong support of $6.60.”

Is A Bearish Shift Underway?

For at least a few more weeks, it appears that fundamentals point to continued weakness in the gas market. In addition to the mostly moderate weather pattern in place, production has generally topped 100 Bcf/d after fluctuating in the mid- to high 90s Bcf/d throughout the summer. The additional output has made its way into underground storage, which had struggled for much of the injection season to close the gap to the five-year average.

On Thursday, the Energy Information Administration (EIA) reported the third straight triple-digit injection into storage inventories. The 129 Bcf build was the largest for the fall season and among the top three injections dating back to 1993. Importantly, the increase lifted stocks to 3,106 Bcf and trimmed the deficit to 165 Bcf below year-earlier levels and 264 Bcf below the five-year average.

Over the next four EIA reports, EBW said the storage deficit versus the five-year average could more than halve to only 125 Bcf. Lingering injections into early November could further trim the deficit and make it increasingly difficult for Nymex futures to generate a rally.

“Nonetheless, recent bearish shifts could be rapidly undone by a particularly cold shot in November,” EBW senior analyst Eli Rubin said. “Although the near-term outlook continues to appear bearish, storage remains low in absolute terms and the market could rapidly reverse higher over the next 30-45 days.”

Notably, liquefied natural gas demand is set to ramp higher in the coming weeks with the expected return later this month of Cove Point. Freeport also should begin taking in feed gas volumes as it prepares for an early to mid-November return. The added LNG demand, combined with the potential for another cold blast, could quickly reawaken bulls and send prices sharply higher.

“We are not out of the woods,” Powerhouse Brokerage LLC Chairman Alan Levine said of the increased strain the returning LNG exports facilities could bring on domestic supplies.

Spot gas prices across the Lower 48 traded almost sideways on Monday, with generally light demand keeping prices in check in most areas. There were a mix of gains and losses, but next-day gas prices stayed well within a quarter of Friday’s levels at the majority of U.S. price locations.

New England was one exception, as it often is.

AccuWeather said sub-freezing temperatures were seen across portions of the region on Sunday morning before a warm-up on Monday. However, the thaw is expected to be short lived as temperatures reach their peak for the week on Wednesday. By Thursday, a “potent cold front” is expected to sweep across the eastern half of the United States this week, bringing with it cold Canadian air.

“Temperatures are expected to crash as a surge of cold air follows a powerful cold front this week,” said AccuWeather meteorologist Brandon Buckingham.

The wave of cold air is set to first push through the northern Plains by Wednesday before sweeping through the Great Lakes and Ohio Valley. Temperature swings across the Ohio Valley and Northeast are likely to be drastic, according to AccuWeather, with high temperatures falling as much as 15 degrees in just a couple days.

In Cleveland, OH, temperatures in the lower 70s on Tuesday and Wednesday are forecast to be replaced with a high only in the upper 50s on Friday. While the shot of cold air will be delayed farther east, Hartford, CT, can expect a similar drop in temperatures.

Meanwhile, the combination of the cold air and moisture is likely to bring a few snowflakes to portions of the Great Lakes region. While the most widespread snow is likely across Minnesota and Wisconsin, parts of Michigan and New York also could have some flakes, according to AccuWeather.

“The cold air that comes late this week is likely to stick around into the weekend,” forecasters said. “Another cold front will bring a reinforcing push of winterlike air next week.”

Though still a couple of days out from the chillier weather, New England’s Algonquin Citygate saw spot gas prices jump 46.5 cents day/day to average $6.070 for Tuesday’s delivery. Tenn Zone 6 200L cash was up 50.5 cents to $6.045.

Elsewhere across the country, benchmark Henry Hub spot gas prices ticked up only 2.5 cents to $6.245, and Katy slipped 8.0 cents to $5.475.Locations in the Rockies fell deeper into the red, while California markets were mostly stronger. The SoCal Border Avg. jumped 81.0 cents to $6.530.