Natural gas futures were unusually quiet on Thursday, bobbing in and out of positive territory as the latest government inventory data offered no surprises and moved the needle only slightly on storage deficits. The September Nymex gas futures settled at $9.375/MMBtu, up 4.5 cents from Wednesday’s close. October futures ticked up 4.4 cents to $9.344. 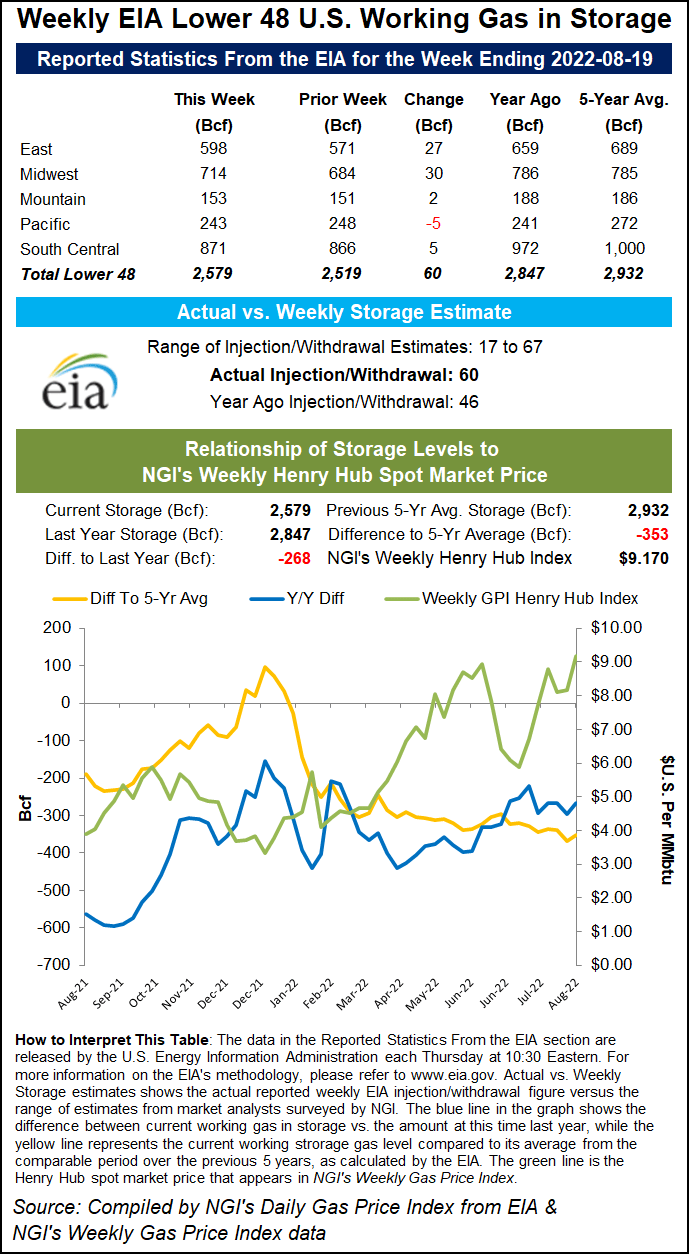 Spot gas prices were mixed amid pockets of lingering heat in some regions and heavy rains in others. NGI’s Spot Gas National Avg. slipped 8.0 cents to $8.855.

The U.S. Energy Information Administration (EIA) said natural gas inventories for the week ending Aug. 19 rose by 60 Bcf, right on target with estimates ahead of the report. EIA recorded a 32 Bcf build in the year-earlier period, while the five-year average injection is 46 Bcf.

“This was the cleanest number in some time,” said Enelyst managing director Het Shah.

Ahead of the latest data, a Reuters poll of 13 analysts produced estimates ranging from injections of 17 Bcf to 67 Bcf, with a median forecast of 60 Bcf. The median of 13 estimates submitted to Bloomberg as of early Thursday also was 60 Bcf, with a range of 17 Bcf to 65 Bcf.

Broken down by region, the Midwest added 30 Bcf to stocks and the East added 27 Bcf, according to EIA. South Central inventories increased by a net 5 Bcf, which included a 6 Bcf injection into nonsalt facilities and a 1 Bcf withdrawal from salts.

Looking ahead to the next EIA report, participants on online energy chat Enelyst said tighter balances may result in a lower injection. Demand crept higher with more cooling degree days week/week, while wind generation also fell short of expectations. Production, however, was higher on the week and Canadian imports moved back to more normal levels.

Enelyst participants pegged next week’s injection in the 50s Bcf range. This would compare to the five-year average injection of 46 Bcf and last year’s 21 Bcf build.

Whether the next injection is considered bearish or bullish depends on price, said one Enelyst participant. “And the price is way too high in my opinion.”

That said, Shah noted that no trader wants to get caught short in this market, especially given thin liquidity. He said there is still $6-8 of upside risk and only $2 of downside risk.

Domestic balances aside, surging European gas prices are likely to continue providing support to U.S. prices throughout the winter.

Dutch Title Transfer Facility prices approached $100 on Thursday as Europe works to wean itself off Russian energy supply while ensuring it has enough gas in storage to meet winter demand. European Union storage is around 78% full, with warm weather set to continue through early September.

Maxar’s WeatherDesk said above-normal temperatures are forecast to span from France into the south central region in the 11- to 15-day period, while below-normal temperatures are expected in the far East. Heat is favored to span the Southern Tier while below-normal anomalies are expected in portions of the North late in the period, the forecaster said.

“The broader scale pattern just upstream of Europe is modeled to feature a strong North Atlantic ridge centered to the south of Greenland,” MWD said.

This pattern, according to the forecaster, carries some similarities to the negative North Atlantic Oscillation, a historically cool signal this time of year from the North to Central. Further upstream in the east Pacific, a positive Eastern Pacific Oscillation pattern correlates alternatively to warmer weather in Scandinavia and in the West.

Meanwhile, Europe is sprinting toward a recession later this year while skyrocketing gas prices are forcing industrial cutbacks, according to EBW Analytics Group. CF Industries Holdings Inc. already announced the closure of its Billingham plant in England, and Yara International ASA is throttling back fertilizer production to 35% of capacity.

EBW cited a recent report estimating that more than half of United Kingdom households could soon face energy poverty, with consultants suggesting financial impacts greater than the 2008 financial crisis. Further, the gas price spike has benefited from slackening demand in Asia, with a weak Chinese economy sidelined by Covid, according to the firm.

“If Chinese demand rebounds in the winter and competes with Europe for scarce supplies, there is little holding back substantial further gains,” EBW analyst Eli Rubin said.

Gazprom PJSC had warned of $110 prices this winter before announcing a three-day maintenance outage of the Nord Stream pipeline next week. Rubin said the market’s reaction to Russian supply curtailment is turning Gazprom’s threat into a “self-fulfilling prophecy.”

At the same time, thin electricity reserve margins in the United States are prompting a rethink of the pace of coal capacity retirements, according to EBW. The planned retirement of a coal plant in the Midwest is being delayed, with the unit entering into a reliability agreement with the regional grid operator.

A Mixed Bag For Cash

Spot gas prices were a mix of gains and losses Thursday, with only a few big movers seen across the Lower 48.

The National Weather Service said heavy showers and thunderstorms moved into the Southeast early Thursday, but would shift into the Carolinas by Friday.

On the flip side, prices throughout Appalachia and the Northeast softened in Thursday trading. Tenn Zone 4 200L cash dropped 13.5 cents day/day to average $8.520, while locations farther downstream along the pipeline posted more significant declines. At Transco Zone 6 NY, next-day gas slid 17.0 cents to $8.660.

The NWS said a wave of low pressure developing across the upper Midwest would expand the showers and storms eastward into the Great Lakes, with a chance of severe thunderstorms across New England on Friday. By early Saturday, drier air behind the low pressure system should filter into much of the Northeast.

In contrast, summer heat was set to continue across much of the interior western United States. Prices throughout the Desert Southwest and California reflected heightened cooling demand. KRGT Del Pool cash climbed 19.5 cents to $9.765, and the SoCal Citygate picked up 20.0 cents to hit $9.955.