It won’t be death by a thousand cuts for natural gas. It’ll be far less than that after an increasingly bearish December weather outlook slashed another hefty chunk off natural gas prices to start the week, leaving prompt-month prices down about $1.20 since last Monday (Nov. 29). With production recovering from recent lows and sitting near 2021 highs, the January Nymex gas futures contract plummeted 47.5 cents to $3.657. 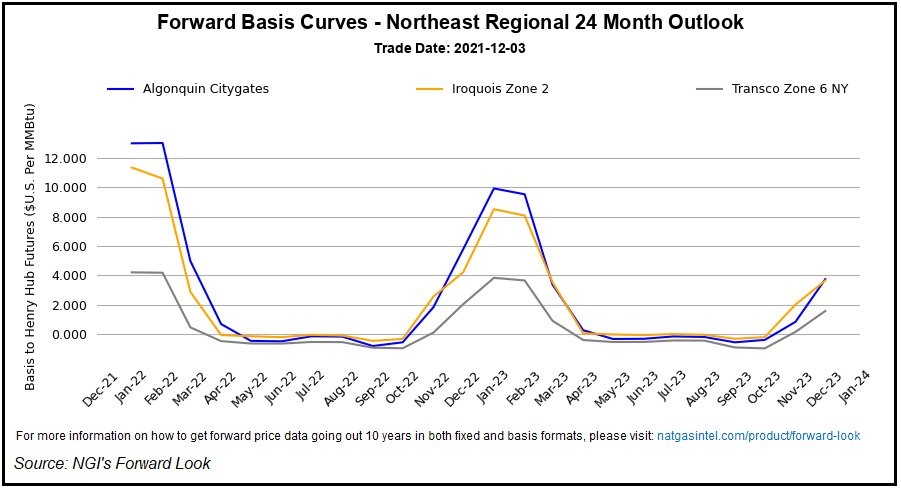 Spot gas prices, however, bounced back as a cold shot is forecast to sweep first across the Rockies, then the Midwest and finally the Northeast over the next few days, boosting demand. NGI’s Spot Gas National Avg. climbed 9.5 cents to $3.960.

Late last week, December already was on track for one of the top five warmest on record. Then, weather data over the weekend and early Monday became so exceptionally bearish, the forecasters at NatGasWeather “didn’t think it could be more so.” But the midday Global Forecast System (GFS) wound up shedding another 2-3 heating degree days (HDD) for mid-December. The result is a Dec. 10-22 period that is projected to be 90-95 HDDs warmer than normal, or nearly 150 Bcf in lighter-than-normal national demand.

“The reason for such light national demand is due to an unseasonably warm upper ridge that’s expected to become anchored across the southern and eastern U.S. Dec. 10-22,” said NatGasWeather, which noted that daytime temperatures could be as much as 35 degrees higher than normal. “As we mentioned last week, the odds favored a warm pattern extending into the 16- to 20-day forecast period, and that’s what recent weather data shows. This should keep bearish weather sentiment in place until at least Dec. 22.

Better opportunities for colder weather systems in the northern and eastern United States are possible in the last week of December, although the weather data needs to be more convincing, according to the forecaster. However, it should be noted that any chillier trends around the holidays may not pack the same punch on prices as they normally would during a non-holiday week.

Is There More Room For Prices To Fall?

Energy Aspects, however, said the aggressive sell-off has left natural gas “undervalued” given that domestic production may have passed its near-term peak and amid growing demand year/year.

“The sell-off implies that inventory levels have gone from balanced to overstuffed,” Energy Aspects said. “But assuming the return of normal weather, the market is more balanced than that, in our view.”

The European consultancy said its forecasts have always been predicated on 10-year trailing degree days. With the first 17 days of December showing sharply lower-than-normal HDDs, “hope for a normal, let alone cold winter, apparently went out the window after Thanksgiving, as did our $5.50/MMBtu January-February price view,” it said.

“But winter is not over. While half of the past 10 Decembers have been milder than normal, only two of those milder months led to a mild January.”

Although the increasingly warm outlook has padded end-March inventories by more than 90 Bcf since Energy Aspects issued its November outlook, the pendulum could swing both ways during the winter. Month-to-month weather volatility notwithstanding, the firm still believes 1Q2022 balances are tighter than in November.

It noted that LNG feed gas demand should be 0.5 Bcf/d higher than in November and 1.7 Bcf/d higher year/year. Energy Aspects also is forecasting slightly higher power burn than expected prior to lowering its winter price expectations.

“Last month featured normal weather and cash prices at $5.08/MMBtu, above the levels we are now projecting for January,” the consultancy said.

Technicals, however, have shifted in the bears’ favor. The January Nymex contract touched a $3.886 intraday high before plummeting throughout Monday’s session. From here, gas prices are looking for support at around $3.355, according to Mizuho Securities USA LLC’s Robert Yawger, director of Energy Futures.

“Incredibly to me,” the relative strength index (RSI) is 32.65, “implying there is still some room to the downside before natural gas enters RSI oversold below 30,” Yawger said.

The March/April spread, he noted, traded to a contract low of only 3.4 cents early in the session. This compares with a contract high of $1.909 in the midst of the European natural gas crisis on Oct. 6.

“The natural gas ‘widow maker’ is down $18,750 per contract, top to bottom, in exactly two months,” Yawger said. “Overeager specs learned the tough way that U.S. natural gas futures have nothing to do with the European natural gas market. U.S. LNG processors export around 11 Bcf of LNG no matter if futures are trading $6.466 or if they are trading $1.432.”

Spot gas prices across most of the country stumbled on Monday given the mostly mild weather conditions in place. There were some regions that were in store for cooler weather, though, propping up prices by more than $1.00 amid the expected bump in demand.

The National Weather Service said periods of light coastal/lower elevation rain and mountain snow are forecast to overspread much of the Northwest and Northern Rockies Monday before moisture reaches the central Rockies and parts of central California. The next cold front is set to sweep into the Northwest late Tuesday and produce more rounds of mostly light precipitation, with heavier snowfall confined to the far northern Washington Cascades.

The frosty forecast sent prices in the Rockies as much as 49.0 cents higher at Stanfield, which averaged $4.360 for Tuesday’s gas day. A similarly stout increase was seen at Northwest Sumas.

Spot gas prices also were stronger in the Northeast, where a wintry mix was heading to the region. AccuWeather said after highs soared well into the 50s, 60s and even near 70 on Monday, temperatures are forecast to be 20-30 degrees lower during the day Tuesday in the Northeast. Daytime temperatures are expected to top out in the 30s and lower 40s, with brisk winds adding to the chill.

Tuesday night, even chillier weather was forecast ahead of the storm coming from the Northwest. AccuWeather expects the cold blast to weaken substantially while racing southeastward across the Rockies and Plains before turning toward the Northeast on Wednesday. Snow is expected to fall Wednesday night into Thursday morning before conditions moderate later in the week.

“The storm is forecast to spread a swath of snow over parts of the Ohio Valley and central Appalachians Tuesday night to the mid-Atlantic on Wednesday and then New England from Wednesday to Wednesday night,” AccuWeather senior meteorologist Brett Anderson said.

Elsewhere in the United States, spot gas prices continued to decline amid much milder conditions. NatGasWeather said highs throughout most of the country were expected to remain in the 50s to 80s, resulting in light demand. Henry Hub next-day gas dropped 22.5 cents to $3.630 for Tuesday’s gas day.