Natural gas futures aimed for the sky on Monday as a much colder turn in the weekend weather models catapulted prices. Aided by a sharp increase in liquefied natural gas (LNG) demand, as well as upcoming contract expirations, the November Nymex gas futures contract jumped 61.8 cents to $5.898. December shot up 59.5 cents to $6.056. 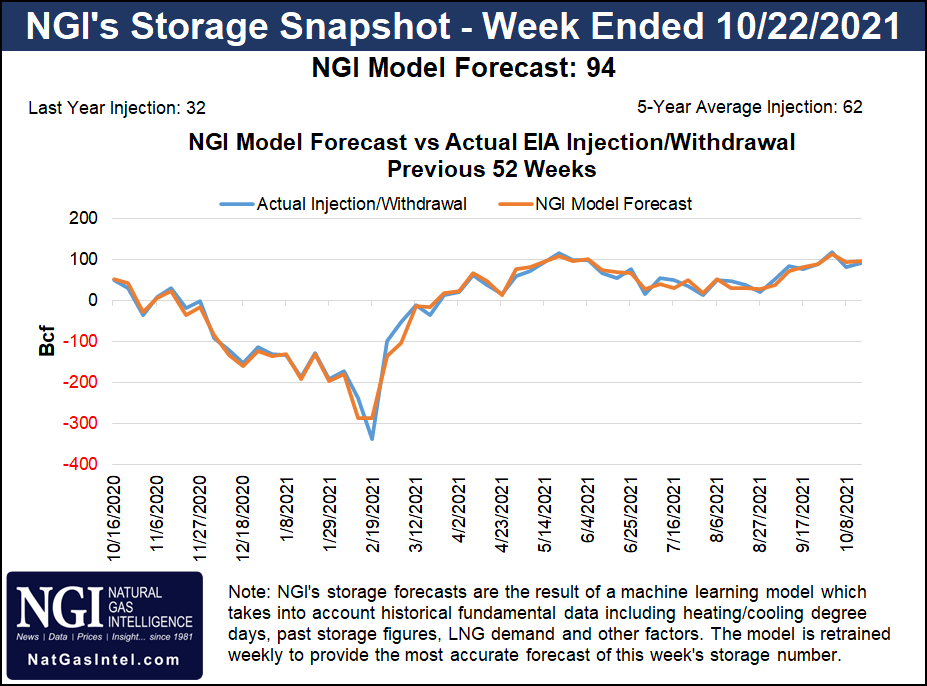 With the weather models late last week starting to show signs of cooler air infiltrating the Lower 48, bulls were quick to jump on the data. The November futures contract was up nearly 20 cents at the open and traded to a $6.008 intraday high.

Interestingly, the latest forecast isn’t exactly bullish. Rather, the additional demand reflected in the models simply aligns more with historical levels. However, Bespoke Weather Services said it is still quite a step change in the pattern compared to how warm it has been. Furthermore, there is the risk that some days shift a little colder yet.

That said, the models look more “tame” at days 14 and 15, so it is not yet clear this is a sustained change, according to Bespoke. “Medium-range models have tended to be underdone on the blocking, and if that continues, this pattern shift could indeed be more lasting,” it said. “…If the block does go away, things could quickly warm back up.”

Timing wise, national demand is forecast to be moderate through Tuesday because of weather systems on the West and East coasts, along with heat continuing over Texas, according to NatGasWeather. Demand should be light from Wednesday to Sunday before cooler weather arrives.

The forecaster said the period from late this weekend through the first week of November is where the models have gotten progressively cooler. Weather systems over the northern and eastern United States are seen tapping a little colder air over Southern Canada. Overnight lows were forecast to drop into the upper 20s to 40s, stoking demand in the process.

“These aren’t frigid systems to start November, and the pattern isn’t bullish. It’s just better than it’s been the past five weeks for more seasonal national demand,” NatGasWeather said.

Is LNG Feed Gas Back For Good?

Meanwhile, LNG demand jumped nearly 1 Bcf day/day and was above 11 Bcf on Monday amid higher intake at the Sabine Pass and Freeport terminals.

Since the beginning of September, Freeport LNG demand has averaged slightly under 1.7 Bcf/d, 0.5 Bcf/d shy of maximum demonstrated capacity because of multiple operational issues. EBW Analytics Group said reports have surfaced about gas quality issues that resulted in a wax buildup in pipelines. This may keep anticipated LNG exports from the Freeport terminal subdued through November until the issue is resolved.

“We have lowered our LNG export demand projections by 0.5 Bcf/d — mirroring recent below-capacity demand — through November as a result, partially offsetting the impact of the weekend bullish weather shift on our seasonal storage trajectory,” EBW analysts said.

Early indications for the next government inventory report point to another larger-than-normal increase. NGI modeled a 94 Bcf build in stocks for the week ending Oct. 22. This would compare with last year’s 32 Bcf injection and the 62 Bcf five-year average build, according to the Energy Information Administration.

Over the long term, however, EBW said export demand was expected to be high on global supply concerns. Though sustained cold has yet to develop in Europe and Asia, demand has remained strong in an effort to stockpile ahead of the core winter season. U.S. feed gas demand hit record levels over the summer, and two liquefaction facilities are scheduled to come online in the next few  months. Once completed, feed gas demand could approach 13 Bcf/d.

In a cold-winter scenario, there are few short-run fundamental offramps to reduce demand or increase supply to calm the market before prices reach double digits, EBW warned. This underlying fear remains palpable, for now, and prices are likely to jump higher on any bullish forecast shifts.

“If November and December do not feature significant cold, however, natural gas futures could fall back to the low-$4.00/MMBtu range by year’s end,” EBW analysts said.

The East Coast put up the largest gains as the first Nor’easter of the season may become the third bomb cyclone to hit the United States in a matter of days. AccuWeather said the storm was spreading northeasterly winds along the mid-Atlantic coast and was expected to quickly strengthen as it moved along the Eastern Seaboard. As it does, the storm could undergo a period of rapid intensification to become a bomb cyclone.

The Nor’easter was expected to become stationary off the Northeast coast by late Monday, according to AccuWeather. Heavy rain was forecast to move into the New York City area before pushing into central and southern New England on Tuesday, where it could continue to unload rain.

The heaviest rainfall amounts are expected in Connecticut, Massachusetts and Rhode Island. AccuWeather said a widespread four to eight inches was predicted across these states.

Two similar storms developed in the northern Pacific and slammed into the West Coast late last week and over the weekend.

Elsewhere, rainfall totals of two- to four inches were forecast from far southern Maine through eastern New York and a large portion of New Jersey.

In Appalachia, Millennium East Pool spot gas prices surged $1.005 to average $5.360 for Tuesday’s gas delivery. Several other locations in the region popped up more than 90.0 cents on the day.

On the pipeline front, Rockies Express Pipeline is planning to perform work that could limit up to 116 MMcf/d of westbound flow in Ohio on gas days Tuesday through Thursday. The work being performed at the Washington Compressor Station would limit flows through SEG 380 to 2,791 MMcf/d.

Over the past 30 days, flows through SEG 380 have averaged 2,836 MMcf/d and maxed at 2,907 MMcf/d, according to Wood Mackenzie. Based on these historical values, flow cuts could total 116 MMcf/d.

With the West Coast still feeling the impacts of its parade of storms, spot gas prices also continued to strengthen. El Paso S. Mainline/N. Baja was up 88.0 cents to $6.220. Northwest Wyoming Pool next-day gas was up 77.5 cents to average $5.735.

Gas Transmission Northwest (GTN) also is set to begin a maintenance event that could curb flows along the pipeline system. Starting Tuesday and lasting until the end of the year, GTN plans to perform work at the Bend Compressor Station, reducing flows past Station 14 by 202 MMcf/d. The potential for cuts to firm primary and firm secondary services vary throughout the scheduled maintenance event.

Wood Mackenzie analyst Quinn Schulz said operational capacity at Station 14 would remain at 1,705 MMcf/d for the duration of the work. The Bend compressor is near Bend, OR, and it transports gas imported from Canada south for delivery onto the PG&E, Tuscarora and Ruby pipelines.

Similarly stout increases were seen throughout California, while upstream in the West Texas portion of the Permian Basin, Waha spot gas tacked on 54.0 cents to average $5.225.

Meanwhile, Pacific Gas & Electric Co. said it was continuing to restore power to the roughly 380,000 customers that lost it during the weekend storms. About 7% of the utility’s 5.5 million customers lost power because of the high winds associated with the storms. Around 125,000 customers were still without power in the latest update.