Even with Hurricane Laura set to decimate demand along the Gulf Coast, natural gas forward prices experienced yet another surge in the week before the Category 4 storm made landfall, according to NGI’s Forward Look. 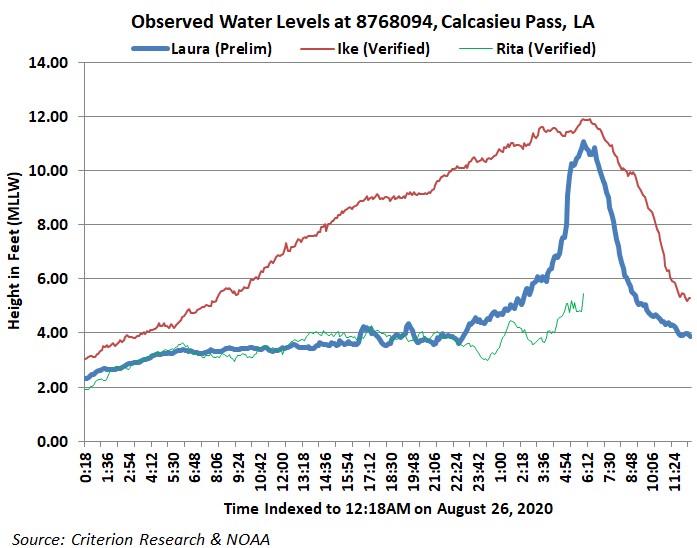 Double-digit gains were the norm outside of the Northeast and California, helped in part by surging global gas prices and a pullback in production ahead of the storm. However, with easing heat leading to steep declines on the coasts, September and October prices averaged only 4.0 cents higher for the Aug. 20-26 period, and smaller shifts were seen further out the forward curve.

Taking California and the Northeast out of the mix, the leg higher for U.S. forward markets mirrored the moves along the Nymex futures curve. On Wednesday, the September Nymex futures contract stood at $2.461, up about 11.0 cents from Aug. 20. October was up 7 cents on the week to $2.574, while the winter strip slipped a couple of notches to $3.08.

Most of the large price swings were concentrated at the front of the curve, where prices continued to gain in sympathy with Dutch Title Transfer Facility (TTF) prices as unplanned pipeline maintenance in Norway reduced exports to other parts of Europe. However, that work has now ended, exports have risen and weather outlooks are showing above-average temperatures continuing into November.

However, Laura was a more immediate concern for the U.S. LNG market. Packing sustained 150 mph winds, the storm took a direct hit on Sempra Energy’s Cameron LNG in the pre-dawn hours on Thursday. However, dangerous flooding and high winds meant that a full assessment of the damages is still days away, or longer.

Cameron LNG spokesperson Anya McInnis told NGI that based on media reports, it appeared the storm surge was less than projected. As of midday Thursday, Cameron had mobilized its damage assessment and recovery team to access the site once local authorities deemed it safe to do so.

Cameron on Wednesday shutdown the terminal and evacuated all personnel ahead of Laura’s landfall. Sabine Pass LNG had done the same on Tuesday, and the eye of the storm ultimately missed the terminal by one mile.

RBN Energy LLC natural gas analyst Sheetal Nasta said the physical impacts to the LNG export facilities depend on a host of variables. These include the path, intensity and longevity of the storm on the water, as well as the onshore path and the amount of rainfall and flooding it brings. How long the storm lingers in infrastructure-dense areas, how it affects personnel presence at facilities and what happens to the power grid also have to be considered, she said.

“Once the storm passes, there’s still the aftermath, waiting for any flooding and other physical impacts to subside, bringing personnel back and returning operations to normal, all of which takes time,” Nasta said.

Bloomberg data showed seven vessels floating in the Gulf of Mexico (GOM) Thursday, an increase from the four that were seen Wednesday. More were headed toward the GOM.

Analysts see LNG demand at Sabine Pass and Cameron taking about two weeks to recover, assuming no damage. Further demand increases are seen thereafter, with LNG seen “in the money everywhere by Sept. 15,” according to one participant on The Desk’s online energy platform Enelyst. “Prices get more and more bullish as you move out the curve.”

There are still quite a few other variables for the U.S. market to manage through ahead of the winter, most notably storage. On Thursday, the Energy Information Administration (EIA) reported a 45 Bcf injection into natural gas storage inventories for the week ending Aug. 21, lifting stocks to 3,420 Bcf. Although the build was below historical levels, inventories still sit 580 Bcf above year-ago levels and 438 Bcf above the five-year average.

The EIA reported no net change week/week for South Central inventories after salt facilities withdrew 1 Bcf and nonsalts added 1 Bcf. Salt stocks are now at 334 Bcf, and maximum capacity is in the range of 400 Bcf.

Enelyst participants noted that Sabine Pass and Cameron potentially could take out salt storage in order to manage their respective shutdowns, “if there is any left.”

Elsewhere, the East recorded a 25 Bcf injection, while the Midwest added 24 Bcf, according to EIA. Mountain region stocks rose by 3 Bcf, and the Pacific withdrew 7 Bcf.

Mobius Risk Group said the EIA’s 45 Bcf injection is tighter week/week on a weather-adjusted basis and “helpful for market bulls who understandably see the rally in downstream LNG demand markets and tightening domestic supply/demand later this year as reasons to add length.”

The next EIA report also appears to be generally supportive, according to Mobius, with early indications suggesting a build between 30 and 40 Bcf. This would compare to the same week last year at a 77 Bcf injection.

However, cooler weather is ahead, and there is risk of GOM production returning before LNG feed gas demand is able to ramp back, which are “notable short-term headwinds,” the firm said.

While acknowledging the bearish catalysts looming over the market, EBW Analytics Group said it is possible that significant floating LNG cargoes, which remain largely untested, may be underestimated by the market. August-to-date demand has exceeded expectations by roughly 1.0 Bcf/d, and staying ahead of expectations, including nearing full utilization by late October north of 10 Bcf/d, may remain on the table.

“Alternatively, the appearance of lasting production declines may convince the market that the winter strip remains undervalued,” EBW analysts said.

The EBW team is currently projecting 1.5 Bcf/d of dry gas production declines by the start of winter, which may cause the market to re-evaluate the current winter storage trajectory and push prices higher to ensure winter supply adequacy.

Longer term, analysts see significant price volatility remaining likely. EBW pointed out that the market typically balances through a combination of changes in the storage trajectory and changes in gas price that affect a “smaller, price-sensitive portion” of demand. With the market attempting to fill inventories to the brim without spilling over, however, reduced flexibility in the end-of-season storage figure may force increased price volatility to balance the market and keep inventories within the desired range.

“Recent surprises have been mostly bullish, creating the dramatic rally in Nymex futures since early August, but bearish surprises could similarly yield outsized price declines in the months ahead,” EBW said. “While we maintain a bullish tilt on a seasonal basis, therefore, the risk of large price declines occurring at some point in the next 30-45 days should not be ruled out.”

With only brief periods of heat across the Northeast in August, and cooler weather ahead for the heavily populated region, forward prices tanked. The sharpest declines were at the front of the curve, however, and prices for the upcoming winter (November-March) slipped only slightly over the Aug. 20-26 period, according to Forward Look.

Similar pricing behavior was seen across the Northeast and upstream in Appalachia.