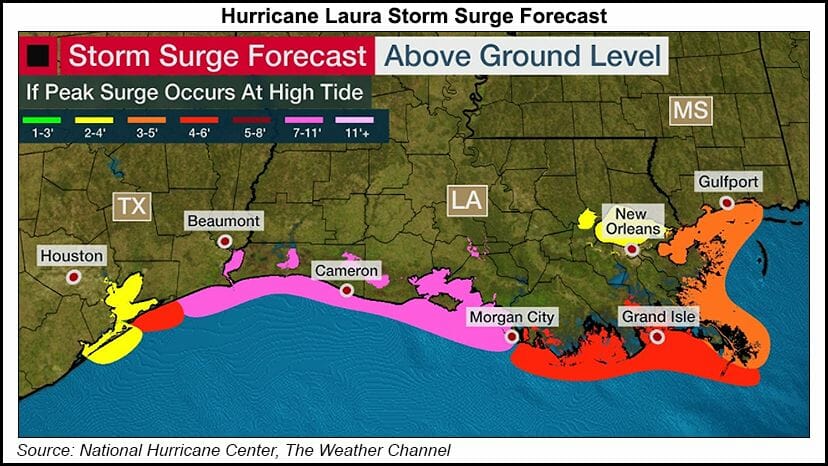 Altogether, about 400,000 people in Texas had been ordered to evacuate Tuesday, with more than 325,000 people in Louisiana also ordered to move inland. The governors of Texas and Louisiana declared disasters in advance of the storm.

Cheniere Energy Inc. temporarily suspended operations and evacuated personnel from its Sabine Pass liquefied natural gas (LNG) terminal in Louisiana, with feed gas deliveries to the facilities declining ahead of the shutdown. NGI’s LNG Export Tracker shows feed gas volumes to Sabine Pass dropping to 745,478 Dth/d by Tuesday, off from 1,476,811 Dth/d on Sunday.

“Operating safely and responsibly to protect our employees, surrounding communities and the environment is our number one priority,” spokeswoman Jenna Palfrey told NGI. “During severe weather events like this, our teams and preparedness plans are activated, and the proper precautions are taken to protect both employees and operations.”

Likewise, Cameron LNG operations were to “run at a reduced rate with a ride-out team of essential operations personnel,” according to spokesperson Anya McInnis. In accordance with the Cameron Parish mandatory evacuation order issued, “all non-essential personnel and contractors were asked to safely work from home or an alternate location.”

Cameron LNG’s preparations include provisions for Category 5 hurricane winds, heavy rains and storm tides, or flooding. “Safety of personnel is foremost, and procedures will institute a shelter in place when winds approach 45 mph,” McInnis said.

Freeport LNG initiated its emergency response plan 96 hours ahead of Laura’s projected landfall, and management is “actively monitoring the forecast tracks” and “has taken steps to secure our site,” said spokesperson Heather Browne.

As for the midstream sector, pipeline giant Kinder Morgan Inc. by early Tuesday had suspended operations at the International Marine Terminal in Port Sulphur, LA, and reduced operations at the Harvey Terminal, in Harvey, LA. All other systems were operational. It also declared a force majeure at Tennessee Gas Pipeline Co.’s compressor stations 32 and 823 due to evacuations in Louisiana.

“We are currently securing buildings and warehouses, isolating power systems and removing some operations personnel to ensure their safety and to ensure that qualified personnel are able to resume operations following the storm,” Kinder spokeswoman Melissa Ruiz told NGI. “We will continue to monitor the storm’s progress and take additional precautions, if warranted.”

A spokesperson for Energy Transfer LP, which operates an extensive network of natural gas, natural gas liquids, crude oil, LNG and refined products assets along the Gulf Coast, told NGI Tuesday, “At this time, we are actively monitoring the situation and will follow our hurricane preparedness plan as appropriate.”

Enbridge Inc. had activated its emergency response plan for both on and offshore operations in the U.S. Gulf of Mexico (GOM). By early Tuesday, it had removed personnel from offshore facilities and was actively monitoring the storm, according to spokesman Michael Barnes. “Our focus is on protecting our people and facilities.”

Williams said that its assets are “physically unaffected at this time,” and management would continue to “monitor and adjust to changes in producer volumes as both storm systems pass.”

On Tuesday, the Bureau of Safety and Environmental Enforcement estimated that about 84% of the current oil production and 61% of the natural gas production in the GOM had been shut-in.

The Energy Information Administration (EIA) said Tuesday that transportation fuels and electricity were most at risk of supply and demand disruptions from the storm, noting that widespread power outages following the landfall of Hurricane Irma in September 2017 caused electricity demand in Florida to fall to 64% lower than typical levels for that time of year.

Two of Louisiana’s three nuclear power stations, the 1,401 MW Grand Gulf and 967.5 MW River Bend stations, were completely offline as of Tuesday, according to EIA.

A hurricane warning was in effect along the Gulf Coast, from San Luis Pass, TX, to Intracoastal City, LA, as Laura strengthened and moved northwest in warm Gulf of Mexico waters toward the nation’s No. 1 oil and natural gas complex.

Based on measurements by hurricane hunter aircraft of the U.S. Air Force and the National Oceanic and Atmospheric Association, Laura early Tuesday became the fourth hurricane of the 2020 Atlantic season, prompting evacuations and storm surge watches across the Upper Texas coast and into northwestern Louisiana.

Laura was predicted by the National Hurricane Center (NHC) to come ashore late Wednesday or early Thursday as a potential Category 3 hurricane, though rapid weakening was expected after landfall.

A turn to the northwest was expected through Wednesday night, with the storm expected to move inland on Thursday. Tropical storm conditions, with winds of at least 40 mph, were possible by Wednesday afternoon, the NHC said.

From Wednesday afternoon through Friday, Laura is expected to produce rainfall totals of 5 to 10 inches, with isolated maximum amounts of 15 inches across portions of the northwestern Gulf Coast from western Louisiana to far eastern Texas, and northward into much of Arkansas. Over the Lower to Middle Mississippi Valley, 2 to 4 inches of rainfall with isolated totals of 6 inches are expected, according to the NHC.

The firm also said Laura “has an impressive moisture pouch that will only continue to grow over the Gulf…Heavy rains, dangerous surge and damaging winds will likely be long-lived concerns with this system.”

Citing analysis from the University of Wisconsin-Madison’s Cooperative Institute for Meteorological Satellite Studies, Empire also said the storm was “entering an extremely favorable region for strengthening with shear less than 5 knots.”