Against a backdrop of persistently wild swings, natural gas forward prices came tumbling down during the trading period from May 5-11, according to NGI’s Forward Look. 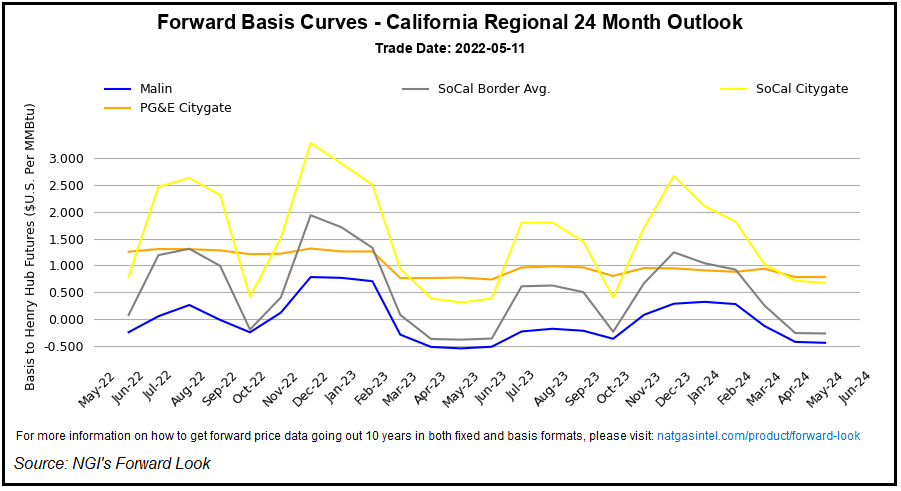 June fixed natural gas prices averaged $1.130 lower on the week, with both the balance of summer (June-October) and the upcoming winter (November-March) also dropping more than $1.00, Forward Look data showed.

There was little deviation among U.S. pricing locations, with natural gas basis prices less than a dime changed on the week.

Ongoing maintenance along the Pacific Gas & Electric system likely drove the basis moves. Work is being carried out along the Redwood and Baja paths throughout the remainder of the month.

But further volatility is possible, according to Mobius Risk Group.

Although not particularly impactful yet, gas flows may be affected by a wildfire burning between Laguna Niguel and Aliso Viejo, CA, about 50 miles southeast of Los Angeles. The Coastal Fire, as it has been named, “is dangerously close” to the Aliso Canyon storage facility, Mobius pointed out.

Aliso Canyon “still operates as a buffer when daily demand exceeds the capacity of inbound pipes from Texas and the Rockies,” Mobius analyst Zane Curry said.

The analyst noted that the Pacific region has become increasingly limited in its ability to serve local demand and balance daily inflows. This is partly because of a sharp reduction in storage capacity in the region.

Notably, the amount of working gas at Aliso Canyon is only at about 60% of its former capacity following a well failure in 2015 that led to the release of nearly 100,000 tons of methane for nearly four months. PG&E also reclassified 52 Bcf of gas to base gas, rather than working gas, last summer.

This has “created a dynamic where daily volatility is likely to remain elevated,” Curry said.

The Coastal Fire could exacerbate the situation.

On Friday morning, AccuWeather said the blaze had engulfed more than 200 acres, with only 15% containment. Roughly 900 homes had been evacuated, and a state of emergency was declared.

Although coastal winds fanned the flames, AccuWeather said one local fire official indicated the winds impacting the Laguna Hills region on Wednesday, when the fire started, were nothing out of the ordinary.

“The winds we experienced today are not unusual,” Orange County fire chief Brian Fennessy told reporters. “These were not Santa Ana winds. These are coastal winds that we experience generally every day.”

The big difference, according to Fennessy, is the parched conditions plaguing the region. “We’re seeing it again with the climate change.” The fuel beds throughout Southern California and throughout the West “are so dry that a fire like this is going to be more commonplace.”

AccuWeather chief meteorologist Jonathan Porter said the historic lack of precipitation for a stretch of late winter into early spring has left California in a perilous state. Although there was some rain and mountain snow in California in parts of December and April, the wet season overall featured record low amounts of precipitation, according to Porter.

“In fact, we witnessed the record driest January through April time period in California in 128 years this year, a truly staggering statistic,” he said.

On a more macro level, with supply/demand fundamentals relatively stable over the trading period, the sharp retreat in fixed prices along U.S. forward curves was likely a technical correction following gas’ move past $8.000.

EBW Analytics Group noted that Henry Hub’s 20-day moving average has been a source of technical support for the prompt month since mid-February, helping to sustain the “monster” rally in natural gas in late winter and early spring. Once that support was broken, however, a signal for another test of technical support may have emerged.

“The combination of a price-inelastic market – when both last week’s steep price gains and this week’s plunge have done little to affect underlying market fundamentals – and thin trading liquidity as margin requirements rise and traders reduce exposure, together create the opportunity for recent massive price moves in the current environment,” EBW senior analyst Eli Rubin said.

Based on fundamentals, gas prices could slide further in the near term. Weather-driven demand is set to slump as fading heat demand outweighs the impact of scorching heat in Texas. Liquefied natural gas (LNG) demand also remains muted amid seasonal maintenance.

However, production remains off earlier highs as well. This is fueling concerns that supplies could fall short during the upcoming winter, as storage injections have struggled to gain momentum so far this summer.

“Across the U.S., there remains an intense need to refill storage rapidly, and at times it would stand to reason that storage demand is a significant contributor to spot pricing resilience,” said Mobius’ Curry.

Thursday’s Energy Information Administration (EIA) natural gas storage report provided the latest snapshot into how well-equipped the market is to reach what it deems an adequate pre-winter inventory level. However, the EIA said stocks for the week ending May 6 climbed by a lower-than-expected 76 Bcf. The build was a few Bcf below consensus and the 82 Bcf five-year average build.

Broken down by region, the South Central segment continued to post the largest stock gains, though even those slid from the prior week. EIA reported a 28 Bcf injection in the South Central, which included 18 Bcf into nonsalts and 8 Bcf into salts. Last week, 40 Bcf was injected into the region’s storage facilities.

The East added 21 Bcf to stocks, and the Midwest added 18 Bcf, according to EIA. Pacific inventories rose by 7 Bcf, while Mountain inventories climbed 4 Bcf.

Bespoke Weather Services said the EIA’s net 76 Bcf injection was reflective of “notably tighter” supply/demand balances compared to the prior few weeks. However, it indicated it would be cautious in extrapolating the supportive data forward, as wind generation was lower during the reference period.

That said, indications are that the current week is looking “similarly tight,” which, if confirmed in the next EIA report, “is a pretty big deal, in our view,” Bespoke said.

Total working gas in storage as of May 6 stood at 1,643 Bcf, which is 376 Bcf below year-ago levels and 312 Bcf below the five-year average, according to EIA.

Looking ahead to the agency’s next stock report, early estimates are pointing to another injection near 80 Bcf. However, Mobius pointed out that the reference week in both this week’s EIA report and the subsequent report include a roughly six degree-day decline week/week.

“Logically, a decline in degree days should equate to sequentially larger weekly injections,” Curry said. “If this proves not to be the case, the market may begin to question the magnitude of estimated Texas production.”

Indeed, production may be the most critical factor guiding natural gas prices in the coming months. After reaching 97 Bcf/d in December, output has lagged well below that level and put the market on watch for when it may move meaningfully higher.

Production levels impact both current supply/demand fundamentals and sustainably shift long-term market dynamics, according to EBW. This is unlike weather outcomes that have a greater short-term impact but can quickly exhibit mean reversion and are a less durable medium- to long-term signal.

“While many dry gas producers – particularly in Appalachia – have recommitted to maintenance-level production, both large supermajors and smaller private companies are raising production as oil prices trade near $100/bbl and natural gas futures remain at their highest levels since 2008,” EBW’s Rubin said.

The company continues to favor a significant supply-side production response to higher commodity pricing. However, it expects gains to be concentrated later this year, at the end of summer and into the autumn.

“If supply rises meaningfully earlier than expected, substantial upside potential this summer for Nymex futures may be averted,” Rubin said. “The deeper into the injection season the market gets without sustained, significant production growth, however, upside pressure may continue to build.”

Also on the horizon is a substantial rebound in export demand.

While the maintenance season has lowered feed gas deliveries to U.S. LNG export terminals in recent weeks, a sharp rebound is expected once that work is complete. NGI data showed feed gas volumes at around 11.5 Bcf on Thursday, off from highs above 14 Bcf/d earlier this year.

Exports via pipeline to Mexico also stand to increase, with the hottest weather still ahead this summer. Last year, exports topped 7 Bcf/d, though they have languished in the 5 Bcf/d range more recently.

In its 2022 Summer Outlook, the Natural Gas Supply Association (NGSA) highlighted industrial consumption and exports as key growth drivers this summer. Exports are expected to average 19.4 Bcf/d this summer, a 2.5 Bcf/d increase over the year-earlier period, according to the trade group.

Importantly, power sector demand also is set to rise in the weeks and months ahead. Highs are already reaching the 90s in Texas, with cooling loads approaching levels usually reserved for much hotter months later in the summer.

Bespoke and EBW both noted that power burns have been robust throughout the winter and spring despite the higher price environment. This has been because of a combination of strong demand-led load growth and continued conservative coal inventory management, along with a heavy nuclear maintenance season.

“This combination of factors has led deeper into the generation stack, occasionally requiring increasingly inefficient generators that consume 1.5 times natural gas per MWh at various points this spring,” Rubin said.

The analyst cautioned that it is possible this trend extends into the summer if hot weather transpires. The power grid operators in Texas, the Midwest and California are all entering the summer with thin reserve margins, increasing the chances for bullish demand surprises, according to Rubin.

NGSA, however, is a bit more optimistic. It is calling for electricity demand to slip by 0.6 Bcf/d this summer. It cited slightly cooler temperatures year/year and less coal-to-gas switching.

The most likely scenario, however, is that “tremendous” upside price risks for winter 2022-23 begin to be more fully priced into the Nymex forward curve. This should carry near-term contracts steeply higher.

“We continue to highlight that double digit prices remain a distinct possibility over the next 30-45 days, particularly if a hot weather scenario develops,” Rubin said.

On Friday, the June Nymex gas futures contract settled at $7.663, down 7.6 cents from Thursday’s close. 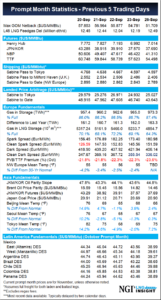 European natural gas and power prices reversed a nearly week-long decline on Tuesday as news of potential damage to the Nord Stream 1 (NS1) and Nord Stream 2 (NS2) pipeline networks stoked concern about the future of Russian supply to the continent. The operator of NS1, Nord Stream AG, detected a drop in pressure late…