Though long gone from the Gulf Coast, Hurricane Ida’s devastation continued across the eastern United States ahead of the Labor Day weekend, wiping out significant production and causing widespread power outages along the way. Supply’s slow expected recovery fueled bullish momentum across natural gas forward curves for the trading period ending Sept. 1, resulting in gains of about 41.0 cents for the October contract, according to NGI’s Forward Look. 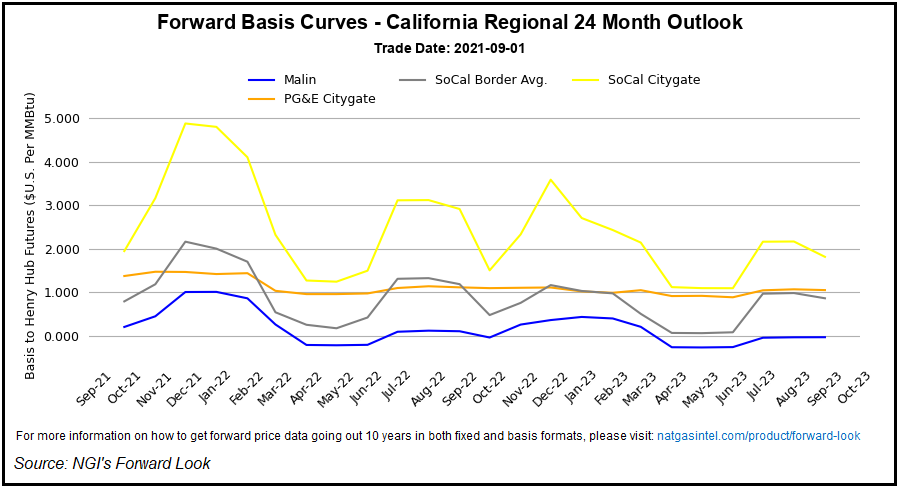 The uncertainty regarding when production may return amplified concerns over storage inventories ahead of winter. The pace of injections this summer has left much to be desired, with inventories trailing historical levels even before the storm crashed ashore Aug. 29 near Port Fourchon, LA.

Though not as stout, price gains for the summer 2022 package and the full Calendar Year 2022 strip were notable at an average of 13.0 cents and 20.0 cents, respectively.

Both supply and demand were still being impacted in the wake of Ida. How this resolves is the key to near-term supply/demand balances, according to Bespoke Weather Services.

Nevertheless, Bespoke chief analyst Brian Lovern said “we are splitting hairs when considering the overall picture, as the fact remains that we are pointed toward under 3.5 Tcf for end-of-season storage levels.”

After nearly all Gulf of Mexico (GOM) production was shut in ahead of Ida, the Bureau of Safety and Environmental Enforcement (BSEE) said output was ramping up slowly.

According to operator reports submitted to BSEE as of midday Friday, about 89% of the natural gas produced in the GOM, or around 1.990 Bcf/d, remained offline. Around 93% of the current oil production, estimated at 1.698 million b/d, also was shut in.

The GOM bore the brunt of supply impacts, with upstream infrastructure and gas facilities in the gassy Haynesville Shale not sustaining “any meaningful hurricane impact upon initial assessment,” according to Rystad Energy.

The Cameron and Sabine Pass liquefied natural gas (LNG) facilities also did not sustain any damage from the storm, with normal operations under way the following day. On Friday, NGI data showed feed gas volumes flowing to the terminals were at around 10.8 Bcf. This is up from around 10.3 Bcf the prior day, as it appears that Freeport LNG was ramping back up after maintenance at one of the production units.

On the demand side, Ida delivered a gut punch to more than one million Louisiana electricity customers as she knocked out power. New Orleans went completely dark immediately after the Category 4 storm barreled through the Big Easy.

On Friday, utility Entergy Corp. said it had restored power to 225,000 customers in Louisiana and Mississippi. The utility said power could be restored across all affected communities by Sept. 8, based on preliminary estimates. However, it noted that estimates could change as it continues damage assessments and restoration work.

Where To From Here?

The past week’s massive price gains following the storm have left some analysts questioning whether the rally has staying power.

EBW Analytics Group analysts pointed out that at multiple junctures since early summer, the market has proven resilient in retaining rapid short-term gains from comparatively mild price spikes, averting declines. “The current setup is similar, with identifiable bearish short-term drivers increasing the likelihood of weakening prices during the first half of September.”

Hurricane impacts aside, weather is expected to moderate in the coming weeks over much of the United States. After a sweltering summer that included multiple temperature records across the country, the more seasonal pattern should help rejuvenate storage injections that have lagged for much of the summer.

There’s a lot of work to be done, though. The Energy Information Administration (EIA) on Thursday said inventories during the week ending Aug. 27 increased by a slightly smaller-than-expected 20 Bcf. Ahead of the report, analysts had pegged the injection closer to around 25 Bcf. NGI modeled a 28 Bcf build.

By comparison, the EIA recorded a 36 Bcf injection in the year-ago period and the five-year average stood at 53 Bcf.

Mobius Risk Group analysts noted that the 20 Bcf build was generally consistent with the trend through the injection season so far. Wind generation was up 8 GWh during the reference week when compared with the prior week, according to the Mobius team. This, they said, could have made the case for a build on the higher end of expectations.

“Conversely, it was one of the hottest weeks of the year in the eastern half of the country and particularly the Upper Midwest and South Central, where peaky gas units can cause parabolic changes in the burn per megawatt hour,” Mobius analysts said.

The heat in the South Central continued the streak of withdrawals in the region. The EIA reported a 22 Bcf draw from the region’s inventories, including a 15 Bcf pull from salt facilities and an 8 Bcf withdrawal from nonsalts.

Until there is more clarity on what balances look like as the storm-related issues are resolved, price action could be choppy, according to Bespoke. However, the big picture remains skewed to the upside.

This projection is a popular one, especially given that LNG feed gas demand is set to increase in the coming months. Both the Calcasieu Pass export terminal and a sixth train at the Sabine Pass facility recently signaled that they could be up and running by the end of the year.

The increased capacity would come at an opportune time in the global gas market. Energy Aspects noted recently that global LNG balances remain “extremely tight” through the peak winter.

The firm pointed out that the November Japan Korea Marker (JKM)-Title Transfer Facility (TTF) spread rose by 38 cents week/week to $2.13 at the end of August, aligning with its forecast spread of $2.14. This price difference, according to Energy Aspects analysts, reflects the economics of U.S. cargoes via the Panama Canal at the margin in Northeast Asia.

Elsewhere in the country, Midwest stocks rose by 22 Bcf to 812 Bcf. However, this was short of the 921 Bcf in storage at this time last year and below the 834 Bcf five-year average, according to EIA.

The Schork Group said Midwest inventories are “worrisome.” Just before the Fourth of July holiday, injections were aping the seasonally adjusted trend and were on track to hit an end-of-season storage balance of 1.083 Tcf. Since then, “injections have decoupled and are now on track to finish the season at 1.057 Tcf, 1.9% below the EIA’s latest forecast and 3.5% below the five-year mean of 1.096 Tcf.”

It was a similar story in the East, where stocks picked up 17 Bcf to reach 678 Bcf. Despite the build, EIA said inventories trailed year-ago levels by around 14% and the five-year average by around 8%.

There may be at least some relief on the way for stocks in the East. Forecasters said even though above-average temperatures are in store for brief periods in the coming weeks, they would be a stark contrast to the record-setting highs experienced last month.

Meanwhile, Ida also wreaked havoc throughout the East. The storm dumped more than a half-foot of rain in some areas, leading to widespread flooding. There also were several fatalities.

The cooler weather ahead, both from the storm and because of the time of year, may lead to much more robust storage injections in the final two months of the traditional injection season.

The period from mid-September through mid-October may be a challenge for those expecting unabated upward momentum, according to Mobius analysts. However, “the asymmetry between upside/downside this winter remains decidedly skewed to the former, even after a 90-cent move at the front of the curve.”