Many energy executives expect natural gas prices to remain below $3.00/MMBtu this year while renewables are expected to continue to take more market share, according to an annual survey by KPMG Global Energy Institute. 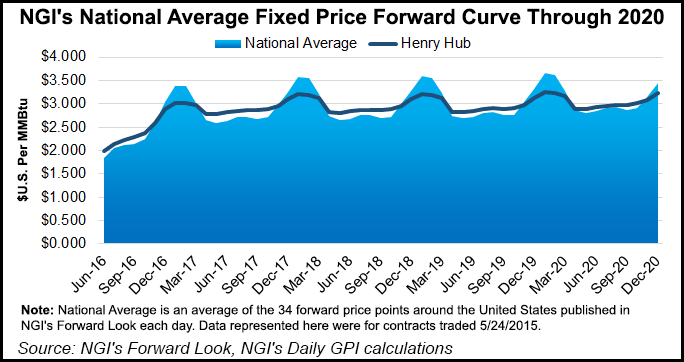 Ninety-two percent of 150 energy executives surveyed for the 2016 Energy Business Outlook said they expect gas prices to remain stagnant. Nearly 40% expect Brent crude oil prices to stabilize to a “reasonable” level by next spring, while about 25% think it will happen by the end of this year. Of those who responded, 88% anticipate crude prices to be less than $50/bbl for 2016, versus 22% who said the same in the 2015 survey.

“This new ‘lower for longer’ commodity pricing environment has made it necessary for energy executives to devise new ways to get access to capital to fund short- and long-term strategic activities,” KPMG’s Regina Mayor, national sector leader for energy, natural resources and chemicals, said in Houston Tuesday. “For this reason, companies are taking necessary actions to identify areas of greater efficiency and looking at organic and inorganic growth strategies.”

Continued volatility in commodity pricing, coupled with the regulatory environment, is expected to require significant changes to U.S. oil and gas business models over the next three to five years, 94% of the executives surveyed said. Over the next two years, top organizational priorities are to develop growth strategies and implement changes. Capital allocation is expected to be directed toward acquiring a business and for transformation initiatives.

Nearly all (92%) of those surveyed expect to be involved in a merger or acquisition within two years, while 38% said the most strategic approach would be to acquire assets versus a company. About one-half (51%) said restructuring/bankruptcy opportunities would be the primary driver.

“The prolonged commodity price situation, technological advances and other disruptive forces have been shaking up the energy industry for some time now, creating challenges and opportunities for companies across all energy segments and operational activities,” said Mayor. “Companies have seen that the way to thrive and remain competitive is by ensuring that their organizations are continually making growth, and a focus on capital spending efficiency, a strategic priority.”

An unstable price environment is the leading factor executives see hindering growth over the next year. Despite the volatile commodity environment, the survey suggested that growth is on the horizon, with close to half (44%-plus) indicating plans to develop growth strategies over the next two years.

Based on the survey results, the power and utilities sector appears focused on renewable technologies and strategic planning. Two-thirds of the executives surveyed cited scale and growth of renewable technologies as the top disruptive trend shaping the sector. In fact, 62% estimated that the United States would have a renewable footprint of 50% by 2045 or sooner.

Many executives (41%) also indicated they expect significant change in utility business models “to a much more distributed, unbundled operating model that redefines the energy supply and delivery business.” To achieve it, executives cited strategic planning as the top process to accelerate growth over the next three to five years, followed by cultivating a company culture that is motivated or incentivized to generate ideas and opportunities.

“Despite the significant changes that have affected utilities, fundamental transformation is on the horizon,” said Mayor. “While the models may vary based on regional demands and regulatory requirements, it is clear that the industry will need to structurally evolve to adapt to new technologies and market participants.”