The Centro Nacional de Control de Gas Natural (Cenagas) is working to create Mexico’s first natural gas hub by next year in the industrialized northeastern region, just across the border from South Texas. 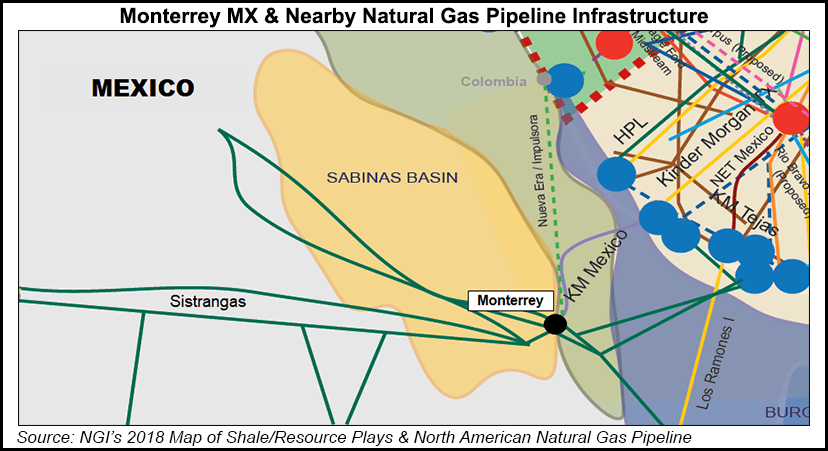 “The hub we think will naturally have to emerge is in the Monterrey area, and we are going to take steps so that one materializes there,” said Eduardo Prud’homme, head of the technical and planning unit. “Cenagas will participate very actively in coordinating with the relevant agents.”

The Monterrey hub could feasibly start operating by July 1, and Cenagas will work to meet that deadline, according to Prud’homme. “We are going to push for it as hard as we can.”

Monterrey, the capital of Nuevo Leon, is a major center of business and industry. It is home to some of Mexico’s largest conglomerates, including cement producer Cemex and the industrial group Alfa.

The city also sits at the confluence of several private pipelines and Mexico’s main natural gas transport system, the Sistrangas, which is operated by Cenagas. Kinder Morgan Inc.’s 640 MMcf/day Mier-Monterrey pipeline runs from Starr County, TX, to just outside of Monterrey, where it interconnects with Sistrangas and several power plants.

To the northwest, Howard Energy Partners (HEP) and Monterrey-based Grupo Clisa are developing the 600 MMcf/day Nueva Era pipeline. The system, anchored by a 504 MMcf/day firm capacity contract with state power company Comision Federal de Electricidad, transports gas from the South Texas gas hub in Webb County across the border to power plants in Escobedo and Monterrey.

Nueva Era is due to come in service by early 2018, according to a U.S. Securities and Exchange Commission S-1 Form filed by HEP in September. Cenagas is reportedly in talks with Nueva Era on a possible interconnect to Sistrangas, and is working to ensure the other elements needed for a Monterrey hub are in place by next year.

“You need to set up a header,” Prud’homme said. “You need to organize all of the involved parties at that header, all of the transporters who are going to coexist there. You need infrastructure, you need certain operating agreements and you need coordination.”

Establishing a hub at Monterrey would lay the groundwork for Mexico’s first local gas price index. Currently, most natural gas sales in the country are priced by the major U.S. indexes — Henry Hub and the Houston Ship Channel, in particular — plus transportation costs. Mexican regulators expect private price reporting agencies to develop local indexes as the new market takes shape.

From the perspective of Cenagas, the hubs are needed to improve operational flexibility and to offer more services to its shippers, according to Prud’homme. Over the long run, he said, the operator wants the U.S.-Mexico border area to function as a pool, which would “facilitate transactions and create arbitrage opportunities for marketers.”

Cenagas is currently surveying Mexican shippers to gauge the market’s appetite for transport capacity and storage services. The study, which wraps up this week, is also intended to measure demand for new transport routes and interconnections to Sistrangas.

Cenagas has identified several potential interconnects with private pipelines that it would like develop, including one at El Encino in northwestern Mexico. Here, several private pipelines carrying gas from the Waha hub in West Texas converge near the westernmost section of Sistrangas and then fan out to link up with various power plants farther south.

Delays to several of the downstream private pipelines, as well as the lack of a Sistrangas interconnect, have curtailed demand for Waha gas at the border. Mexican shippers have sat out several open seasons held this year for capacity on international pipelines in West Texas.

The proposed El Encino interconnection would help establish a second Mexican hub, where Waha gas on the private systems flows into Sistrangas to reach demand centers farther downstream in La Laguna and Durango, both to the southeast.

“If we want to move gas from Waha to one of those points, perhaps we couldn’t do it physically, but by displacement and balancing…it’s possible that this gas could be offered all the way in Monterrey,” Prud’homme said. “But it does depend on the appetite for these routes among end users and marketers. Depending on that we would add the [commercial] volume to Cenagas’ operational needs, and in this fashion we could see what size the interconnection would have to be” at El Encino.

“We’d also need to take into account certain technical issues,” he added. “That section of Sistrangas is one of the farthest away from its supply sources and it would need to be reinforced. And, again, that reinforcement work will depend on the market’s appetite for capacity on these new routes.”

An interconnection at El Encino would also provide a backup supply along the stretch of Sistrangas that runs from the Gloria a Dios compressor station near the U.S. border to El Encino.

“There have been occasions when if we were simply able to inject gas from an alternative pipeline, it would allow us to resolve a major cyclical problem, which would have a big impact on the power sector,” Prud’homme said. “There are generation stations in the area that are very important to the stability of the electrical grid.”