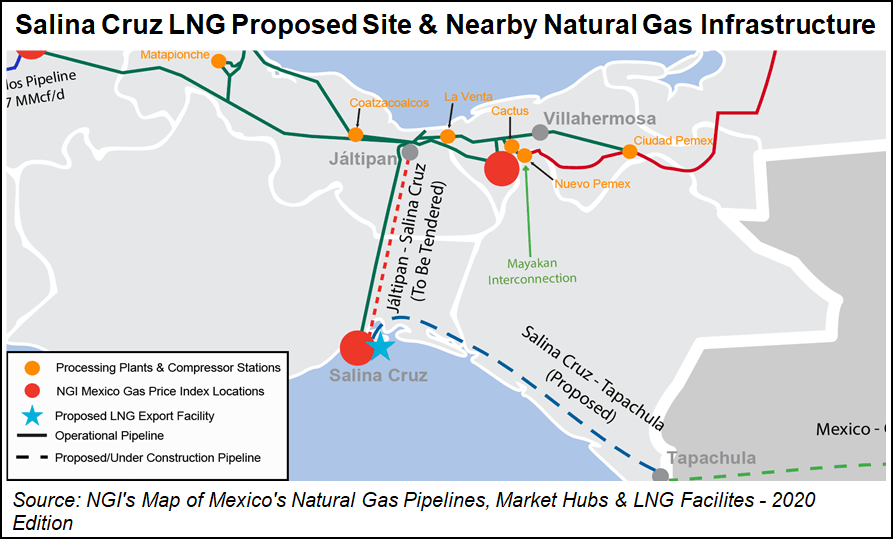 The 500 MMcf/d pipeline would span from Chinameca, Veracruz, to Salina Cruz, Oaxaca, supplying gas to a 430 MMcf/d or 3 million metric tons/year (mmty) FLNG terminal envisaged for the Salina Cruz port.

CFE would sell gas procured via its extensive pipeline network to the FLNG operator under a 25-year take-or-pay contract. The operator would have exclusive rights to market liquefaction capacity and liquefied natural gas (LNG) volumes produced from the project, according to tender documents.

The operator would assume full ownership of the projects and all associated risk, in exchange for “security and certainty” in the supply of gas from CFEnergía, the company said.

The project would allow CFE to monetize its excess pipeline capacity, “as well as contribute to the economic development of the Tehuantepec Isthmus, and strengthen Mexico’s energy security and sovereignty,” according to the company.

The pipeline must be designed to handle future interconnections with industrial parks along its route with capacities of 50-70 MMcf/d.

Previous planning documents have referred to the pipeline as Jáltipan-Salina Cruz. The municipality of Jaltipán is adjacent to Chinameca.

The initiative is meant to industrialize the Isthmus region and help it catch up to northern Mexico, where incomes and standards of living are generally higher.

Whichever firm develops the gas projects must partner with CIIT to develop a terminal to provide maritime services to the LNG plant, with CIIT holding a stake of at least 51%.

Pre-registration for the tender will last from Sept. 2-17, while required documents will be received from Sept. 20-30, CFEnergía said.

More information on the tender, including prerequisites and required documentation, can be found here in Spanish.

Gadex energy consultant and NGI contributor Eduardo Prud’homme has questioned the feasibility of the Salina Cruz terminal, and of the Isthmus project generally.

A massive buildout of CFE’s pipeline system over the last decade or so, combined with stagnant gas output by state oil company Petróleos Mexicanos (Pemex), has allowed pipeline gas imports from the United States to soar.

As a result, multiple LNG projects are in development for Mexico’s Pacific Coast as U.S. exporters targeting gas-hungry Asia seek to bypass the Panama Canal.

Sempra Energy’s Energía Costa Azul is the farthest along, with its 3.25 mmty first phase slated to enter service in 2024.

Executives are eyeing a 12 mmty second phase, along with a separate LNG export project in Topolobampo, Sinaloa state.