Mexico natural gas prices dropped to $3.61/MMBtu in March after soaring to $21.37/MMBtu in February, according to the latest IPGN monthly natural gas price index published by the Comisión Reguladora de Energía (CRE). 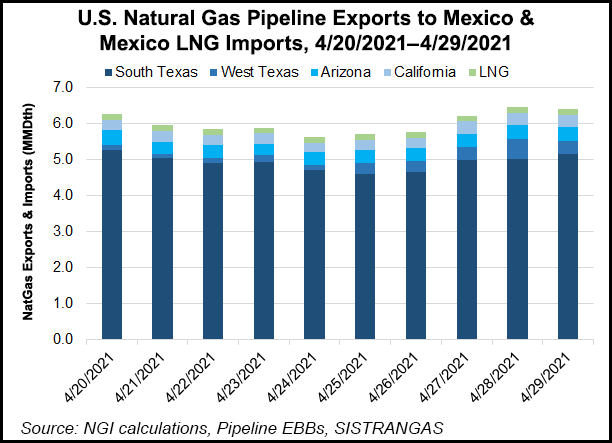 The prices, however, were higher compared with March 2020, when the CRE reported prices of $2.22/MMBtu. The February prices reflected freezing weather in Texas and natural gas disruptions that impacted flows to Mexico.

The CRE used 278 transactions from information provided by 30 marketers to calculate the March index. The industrial northeast reported the highest volume of transactions at 2.183 Bcf/d.

EBW Analytics Group said this week U.S. exports to Mexico are an increasingly important component for U.S. demand and have been “very strong – and could remain so for the next several months.”

Wood Mackenzie analyst Ricardo Falcón expects the trend to continue not only through this summer but in the years ahead. “The existing border flow capacity is ample enough to support incremental Mexican demand in the years to come. Over the past 12 months, U.S.-to-Mexico flows have represented barely 40% on average of a nominal aggregate capacity of 13.8 Bcf/d.”

He cited the recent tender launched by Comisión Federal de Electricidad (CFE) for 3.3 GW of natural gas-fired power with start dates in 2023 and 2024 as supporting growth. Power demand accounts for about half of total Mexico natural gas demand.

Also buoying gas demand is economic growth in Mexico, which the International Monetary Fund pegs at 5% for this year.

Mexico gas production fed into the national pipeline system Sistrangas was 1.206 Bcf on Wednesday (April 28), down from 1.228 Bcf a week earlier (April 21). The processing centers at Nuevo Pemex (242 MMcf), Burgos (321 MMcf) and Cactus (340 MMcf) in the southeastern part of Mexico were the leading injection points.

The five-day line-pack average on the Sistrangas was 6.824 Bcf on Wednesday (April 28) compared to 6.993 Bcf on April 21, according to the Gadex consultancy in Mexico City.

The ideal line pack for Sistrangas is 6.86-7.29 Bcf/d to guarantee sufficient pressure in the pipeline system. Demand on the Sistrangas was 4.565 Bcf on Wednesday, compared to 4.826 Bcf a week earlier.

Natural gas prices enjoyed gains through the first three days of this week.

A gas market participant in Mexico told NGI’s Mexico GPI that there were discussions ongoing in Mexico over the possibility of extending the 2.6 Bcf/d Sur de Texas-Tuxpan pipeline as far as the Dos Bocas refinery in Tabasco. This follows recent discussion around the possibility of a serious gas shortfall in Mexico’s southeast in the upcoming years.

On the Yucatán Peninsula, the cash price at Mérida closed at $4.469 on Wednesday, up 10.3 cents. The Merida price is estimated using the price at Cactus and adding pipeline transportation costs to Merida via the Mayakan pipeline.

There was also a higher-than-expected build in the South Central region, which saw inventories rise by 6 Bcf. This is the region most relevant to Mexico, which has no natural gas storage facilities. However, a contact in the market told NGI’s Mexico GPI that Mexico’s gas grid operator Cenagas is in discussions about developing domestic storage, mainly as a response to the import crisis experienced in February.