Mexico natural gas prices rose to an astonishing average of $21.37/MMBtu in February, up from $3.39/MMBtu in January, following freezing weather in Texas, according to the latest IPGN monthly natural gas price index published by the Comisión Reguladora de Energía (CRE). 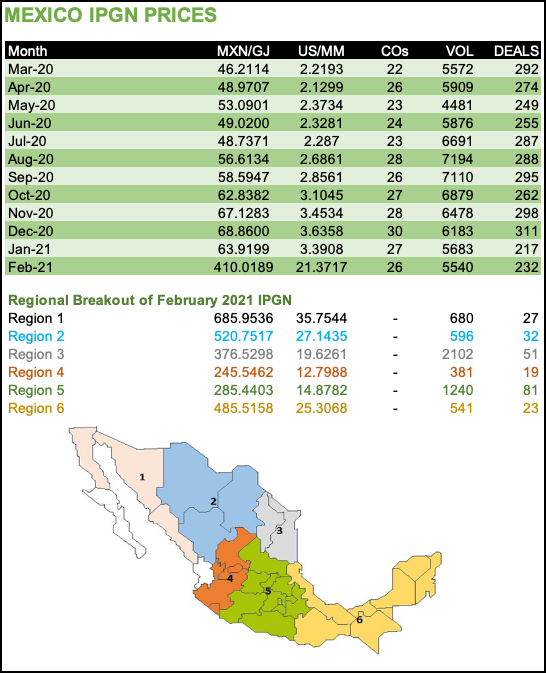 The February price, up from the February 2020 average of $2.71/MMBtu, was the highest price recorded since the index was formed in 2017.

The prices reflect the fact that most users and marketers in Mexico import their gas from the United States, and in particular from Texas. The state was struck by a winter storm Feb. 13-19 that sent prices skyrocketing.

According to respondents to the latest NGI Mexico survey, 64% of gas bought and sold in Mexico is either done as a difference to a daily or monthly U.S. index, or is negotiated as a bidweek basis differential to the Henry Hub. That’s up significantly from the 40% to 47% range from the first three surveys held over the past two years.

Volumes in February dropped to 5.54 Bcf/d, the lowest figure reported by marketers since last May, when the coronavirus impacted Mexico’s key industries.

However, NGI’s Mexico GPI spoke to two natural gas buyers in Mexico who said they had hedges in place and were not impacted by supply shortfalls during the Texas freeze. One requested that a natural gas marketer respect North American Energy Standards Board rules and allow for payment 25 days after gas delivery.

National pipeline operator Cenagas and some private pipeline systems are charging penalties for gas delivered during the period when a critical alert was issued, according to Gadex consultant Eduardo Prud’homme. He suggested the financial impacts of the crisis are yet to be fully known.

Despite the freeze and subsequent power outages in Mexico that impacted more than four million clients, along with a temporary order from Texas Gov. Greg Abbott prohibiting selling outside the state natural gas produced in Texas, overall gas exports to Mexico weren’t too far off in February.

Wood Mackenzie data indicated that pipeline flows and liquefied natural gas sendout from the United States to Mexico combined to average about 5.56 Bcf/d in February, down from 5.7 Bcf/d in January.

The natural gas region 3, which encompasses the industrial hub of Monterrey, as defined by the IPGN index, saw gas deals of more than 2 Bcf/d in February, the highest of any region in the country and on par with January.

The Texas crisis and its impacts on Mexico have again reopened debate about the need for local indexes that reflect Mexican fundamentals. Respondents to NGI’s fourth Mexico gas price survey said the industrial hub of Monterrey in the northeastern part of the country would be the best place for such a domestic pricing index to form.

The IPGN price for February reflects prices almost four times higher than the Henry Hub average for the same month, meaning the impact of the Texas freeze is greater to buyers in Mexico.