Mexico’s natural gas market continued to grow in 2020 despite the chaos wrought by Covid-19 and unease around the government’s state-centric energy policies, underscoring the molecule’s increasing importance to the local economy. 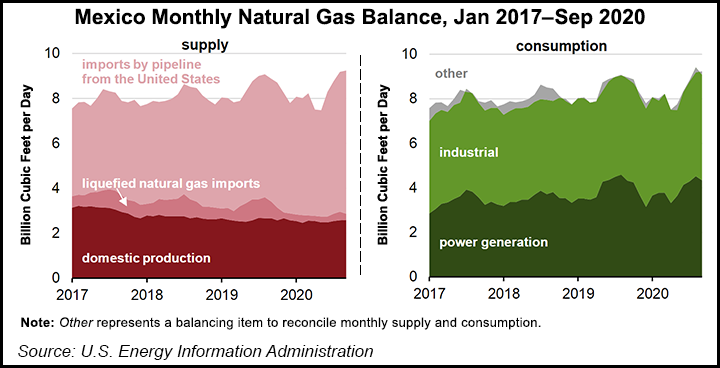 Looking back, NGI’s Mexico GPI forecasts last year may have been wildly optimistic. The year started innocently enough, but it took a sharp detour in the spring.

Shortly after that, industry executives met at a conference in Monterrey and seemed upbeat. They said the local pricing indexes would develop in the coming years as infrastructure interconnectivity and increasing liquidity become features in the natural gas market.

Then came March, and the coronavirus. By the end of the month, Mexico was in a strict lockdown.

Mexico’s IPGN monthly natural gas price index averaged $2.22/MMBtu in March, the lowest price recorded since its inaugural publication in July 2017. It was down from $3.15/MMBtu in March 2019, according to the Comisión Reguladora de Energía (CRE), an average price that at the time was also a record low.

In April, state oil company Petróleos Mexicanos (Pemex) agreed to slash production by 100,000 b/d for two months as part of talks by the Organization of the Petroleum Exporting Countries (OPEC) and its allies in the face of plummeting oil prices and demand.

Officials in Mexico, the United States and Canada during July celebrated the launch of the U.S.-Mexico-Canada Agreement, as the revamped North American Free Trade Agreement treaty took effect. The treaty maintained zero-tariff trade for energy in the region.

President López Obrador traveled to Washington, DC, for the signing of the agreement, which has remained his only trip abroad during his presidency.

Later in July the president sent a memorandum to energy sector regulators underlining his government’s commitment to undo changes made during the previous administration while continuing to strengthen Pemex and CFE. The eight-page memorandum explicitly criticized the 2013-2014 landmark energy reform, arguing that it served only to prop up “private businesses and corrupt politicians.”

The document came to light weeks after former Pemex director general Emilio Lozoya was extradited from Spain and returned to Mexico to face corruption charges. López Obrador, often referred to by his nickname AMLO, said part of what would be revealed in Lozoya’s testimony is that the energy reform was forced through under corrupt means.

“The previous government tried to provide legal grounds for pillage, calling it energy reform, which was approved by a constitutional amendment, and achieved by bribes given to the majority of lawmakers and sold through the deceptive press to the population,” López Obrador said in the memorandum. “The country gained nothing,” from the reform, and “Pemex and CFE were left almost in ruins.”

In August, Pemex reported crude oil production of 1.595 million b/d for July, its lowest monthly output since 1979. And in September, CFE officials said they were implementing an “aggressive policy” to monetize its excess natural gas transport capacity on each side of the U.S.-Mexico border, a welcome sign for marketers and gas market participants.

The second phase of the reconfiguration of the Cempoala compressor station in Veracruz state was also finished in September. The Cempoala project enables supply from the 2.6 Bcf/d Sur de Texas-Tuxpan marine pipeline to flow to the gas-starved Yucatan.

As part of its five-year plan, Cenagas also plans to expand the Montegrande injection point at Tuxpan by 400 MMcf/d to hit 900 MMcf/d, allowing for more U.S. natural gas to reach Mexican markets.

The Cuxtal I interconnection between the isolated Mayakan pipeline in the Yucatan and the national Sistrangas system was  also completed in September, and in October an open season to test support for the system was launched by French company Engie SA.

Also in October, CFE announced the start of commercial operations on the final leg of Fermaca’s Waha-to-Guadalajara pipeline system, which transports gas from the Permian to the industrial center of Guadalajara in the Bahío region of central-western Mexico.

Meanwhile, U.S. natural gas exports to Mexico, most of which cross the border via pipeline, continued to increase in 2020, despite the coronavirus. U.S natural gas exports by pipeline to Mexico rose to 5.9 Bcf/d from July through September, an increase of 0.8 Bcf/d compared with the 2019 average, U.S. Energy Information Administration analysts led by Victoria Zaretskaya said. Mexico has been the leading destination for U.S. gas exports since surpassing Canada in 2015.

Mexico’s total gas consumption fell to 7.5 Bcf/d in May, the lowest monthly volume since December 2016, but by August gas demand started to recover and it surpassed last year’s values.

After the United States went to the polls in early November, analysts suggested energy would be a major issue in the Mexico-United States relationship from 2021 under U.S. President-elect Biden. According to the analyst team at political risk firm Eurasia Group, the most serious risk to bilateral ties is López Obrador’s energy policy, “which is generating growing criticism in the U.S. given efforts to favor state-owned companies Pemex and the CFE, while also targeting renewables.”

There was a flurry of infrastructure news near the end of the year. Energy projects fueled by natural gas dominated Mexico’s second public-private infrastructure plan announced by government and business in early December.

Worth a total of 228 billion pesos, or around $11 billion, the second package includes 29 projects in energy, telecommunications, roads and water. It is part of a broader infrastructure plan aimed at jumpstarting the sinking economy. There were nine energy projects worth 116 billion pesos, or $5.8 billion, all focused around natural gas.

The project would source U.S. gas, and is expected to have an advantage over U.S. Gulf Coast LNG facilities because vessels do not have to traverse the Panama Canal. ECA included a $400 million pipeline in Mexico. The plant would be built adjacent to the company’s existing ECA LNG receipt terminal near Ensenada.

During the official launch, Finance Minister Arturo Herrera and the head of business chamber Consejo Coordinador Empresarial (CCE) Carlos Salazar singled out the importance of the ECA project because of the size of the investment.

Mexico’s Pacific Coast could see a total of three projects being developed in the coming years as Asian markets increase their appetite for imports of cheap and reliable U.S. gas via the shortest transport route possible.

Mexico Pacific Ltd. LLC’s CEO Doug Shanda thinks his company’s LNG export project in Puerto Libertad, Sonora State, could be sanctioned by the end of 2021, with first gas shipped in 2025, “right when the supply gap is forecasted to open up.”

Even as the LNG market has been slammed this year by the economic impacts of the coronavirus, Shanda cited research by Wood Mackenzie forecasting a global supply gap of 85 million metric tons/year by 2030, driven principally by Asian markets.