Mexico’s national pipeline operator Centro Nacional de Control del Gas Natural (Cenagas) has announced that it received 11 bids for the supply of natural gas to ensure the Sistrangas pipeline system maintains system balance, eight of which complied with the objectives set out in the tender process. 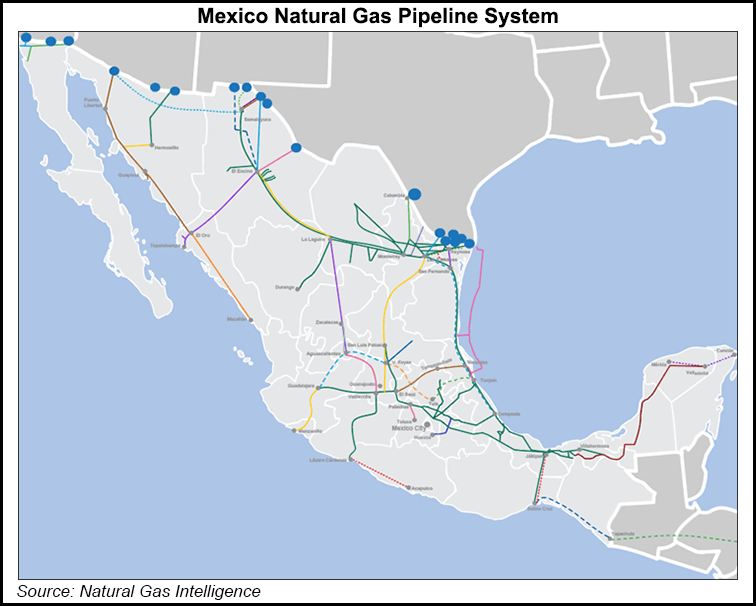 In mid-December, the pipeline operator called on shippers to present proposals of natural gas supply, with the understanding that the supply would be used solely when the operational conditions on the Sistrangas require it.

Starting Feb. 1 and ending Dec. 31, Cenagas will announce the need for supply to the selected companies through an electronic platform being established, with the lowest price offer for the volume needed winning the daily bid.

Cenagas officials called the process a success and expect the online system to be up and running shortly. In the meantime, communication will be over telephone and email. Cenagas said it would not release the names of the companies selected in the initial process, but volumes injected into the system, along with prices, will be published when they occur.

“This measure, a priori, seems promising for the marketing companies that ventured into Mexico after effective open access was achieved in a 2017 open season,” said natural gas expert Eduardo Prud’homme in a recent column. “Given the ambivalence of the government of Mexico regarding private participation in the energy sector, the tender announced by Cenagas is a good sign. It is a step in the direction of market promotion, and not back to vertical integration.”

Shippers in Mexico seem to agree.

“We feel that this process is positive,” said CEO Santiago Garcia of Santa Fe Gas LLC at Industry Exchange’s 5th Mexico Infrastructure Projects Forum in Monterrey, Mexico, last week. “This process had been mentioned some time back, but Cenagas finally decided to do it and we think that it’s a positive for the country. This will allow the system to be better balanced.”

“It’s a move in the right direction,” Thorson said. “We do this sort of activity in the United States and Canada to balance. It’s an excellent move and is going to create less volatility and will send the right signals to the market.”

Through the auction, BP secured 200,000 MMBtu/d of capacity on the NET Mexico pipeline, which spans 120 miles from the Agua Dulce hub in Texas to the Mexico border near Rio Grande City.

“But I would also say that the infrastructure that the country needs so badly is about to be in operation, and when that is complete, some of the balancing of the system won’t be so expensive,” Thorson added.

Citing repeated gas flow imbalances in 2018 and 2019 due to natural gas extracted in excess (extractions greater than injections) or lack of natural gas injection (injections less than extractions), the new rules require Cenagas to publish a monthly report on its electronic bulletin board of all the actions it undertook in the preceding month to balance the system, and the users responsible for system imbalances.

Part of the reason system balancing is currently so challenging is a lack of sufficient meters throughout the system. The chronic imbalances reduce “the permissible operating pressure and puts at risk the provision of the transport service for the rest of the users,” CRE said.

Mexico has no underground natural gas storage capacity, relying to date on LNG and line packing for system balancing.