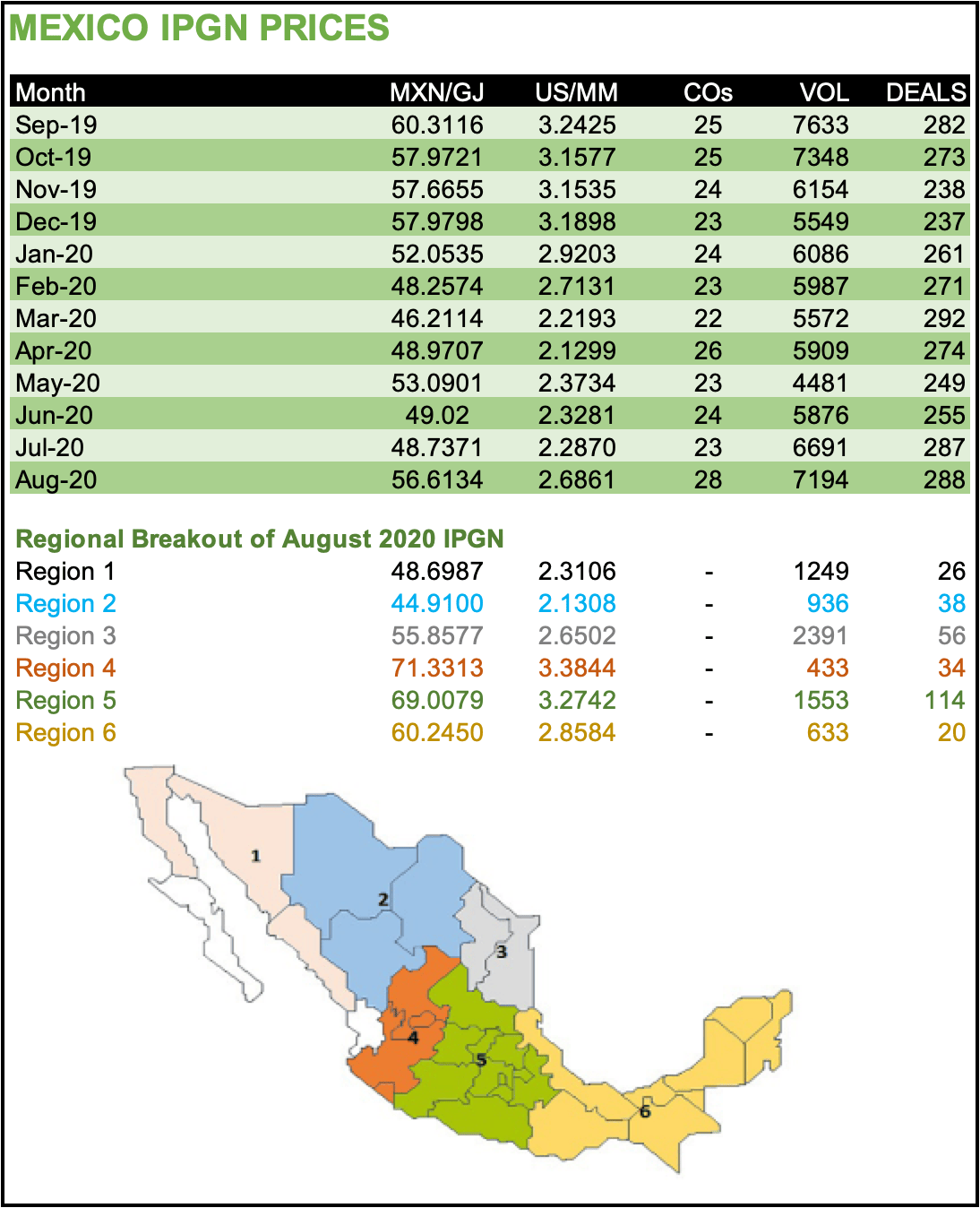 Pipeline natural gas flows from the United States to Mexico have averaged an estimated 6.2 Bcf/d so far in September, up from 5.5 Bcf/d in full-month September 2019, according to Genscape inc.

Even amid a still-raging pandemic and severe economic slowdown in Mexico, Falcón said the resiliency of Mexico’s gas imports has mainly been driven by “still-strong Mexican demand in both the power and industrial sectors, especially during the first half of September.”

Mexico’s imports of liquefied natural gas (LNG), meanwhile, “remain largely consistent with Genscape’s expectations,” Falcón said, adding that for “aggregate LNG sendout from the main regasification terminals in the country, the September-to-date average is just below the 300 MMcf/d mark; inventories have so far evolved in line with seasonal dynamics.”

In other words, Genscape estimates that Mexico’s total pipeline and LNG imports have averaged about 6.5 Bcf/d so far this month, versus 6.24 Bcf/d in the year-ago month.

“U.S. natural gas exports by pipeline to Mexico have been growing gradually following an expansion of cross-border pipeline capacity from the United States to Mexico,” the U.S. Energy Information Administration (EIA) said in a Sept. 15 note, highlighting the recent physical completion of Fermaca’s Waha-to-Guadalajara pipeline system.

Natural gas prices in Mexico, meanwhile, averaged $2.69/MMBtu in August, down from $2.85/MMBtu in the same month a year ago, according to the IPGN monthly natural gas price index published by Comisión Reguladora de Energía (CRE).

The IPGN is a compilation of day-ahead spot transactions reported to CRE by marketers, and is meant to serve as a reference until third-party indexes emerge.

Transactions in Mexico are typically linked to a U.S. location such as Henry Hub, Houston Ship Channel or Waha.

However, U.S. indexes “don’t necessarily reflect the supply/demand fundamentals of various locations in Mexico, especially the farther away you move from the U.S./Mexico border,” NGI’s Patrick Rau, director of strategy and research, said in a recent interview. “Mexican indexes based mostly on Mexican fundamentals would provide a much better domestic market signal, in my view.”

Natural gas production in Mexico averaged 3.91 Bcf/d in August, up from 3.83 Bcf/d in August 2019, according to the latest figures from upstream regulator Comisión Nacional de Hidrocarburos (CNH).

Operators such as Jaguar E&P and Tecpetrol México have led the private sector’s development of Mexico’s non-associated gas reserves through contracts awarded under the country’s 2013-2014 constitutional energy reform.

Jaguar CEO Warren Levy said the firm has drilled four successful wells this year, and plans to drill more than 25 wells next year.