Raymond James & Associates Inc. on Tuesday revised upward its 2013 U.S. natural gas production forecast to average about 66.8 Bcf/d, up 1.3 Bcf/d from a previous forecast, mostly because Marcellus Shale output has not declined, while associated gas from oil drilling is only adding to the surplus. 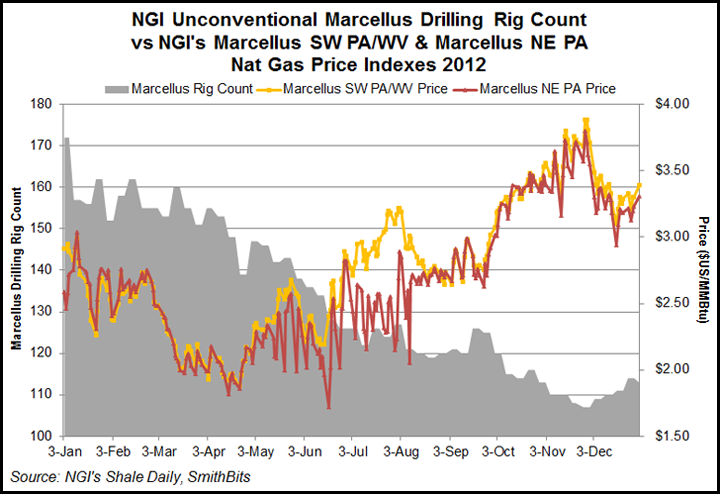 “Now that the dry gas rig count has dropped precipitously (down 60% year/year), many energy analysts are eagerly anticipating an imminent roll-over in U.S gas supply,” wrote analysts J. Marshall Adkins and John Robbins. “We guess gas supply didn’t get the memo because it continues to climb steadily higher.”

Their production model indicates that domestic gas supply won’t roll over “anytime soon and could even continue growing through the rest of this decade (especially if oil prices stay anywhere near current prices).”

A severe reduction in the dry gas rig count in the Haynesville, Fayetteville and Barnett shales has been offset by Marcellus Shale gas gains and associated gas supplies.

“In 2013 we estimate Marcellus production to increase 2.0 Bcf/d year/year, more than offsetting the 0.7 Bcf/d of production declines from the Barnett, Fayetteville and Haynesville combined.” Because of the sharp fall-off in dry gas activity, “the first- and second-year production declines, which are typically the largest, are now behind us.”

If fewer dry gas wells are drilled every year, the decline in output should become smaller, notwithstanding already-in-place production delays, they said. However, if the output continues to decline on the lack of drilling, it could “make it easier for Marcellus growth and associated gas supply to more than offset those production declines from the dry gas plays.”

“Obviously, the recent slowdown in the growth rate is primarily attributable to a more aggressive shift away from dry gas drilling (i.e., Haynesville, Fayetteville) to liquids-oriented plays,” said the analysts. “For example, there were roughly 886 and 792 horizontal wells drilled in the Haynesville in 2010 and 2011, versus only 264 in 2012. That said, the more shocking revelation is that U.S. gas supply is still growing despite the collapse in gas drilling.”

Producers have dropped financing for dry gas plays, and it’s evident that upstream capital is now chasing liquids “as evidenced by the collapse of drilling activity in the ‘gassy’ Haynesville, Fayetteville and Barnett over the past year. As expected, this drilling activity deterioration has led to a decline in combined gas production from these three plays.”

In the Marcellus, 53 gas rigs were dropped between November 2011 and November 2012, according to the analysts. Still, “gas production is still up an estimated 3.1 Bcf/d this gas year.”

Low prices and high decline rates were projected to force U.S. gas supplies lower. But that hasn’t happened in the Marcellus.

“This play is the most economical dry gas play and much of it actually works at $3.00 gas prices. The fact of the matter is that operators are still drilling these high rate wells that generate great returns as E&P companies shift to pad drilling.”

As the Marcellus Shale oil and gas rig count dropped significantly during 2012, natural gas prices in the region ticked higher, according to data compiled by NGI’s Shale Daily. After starting 2012 at $2.91/MMBtu and $2.59/MMBtu, NGI‘s Marcellus SW PA/WV price index and Marcellus NE PA price index climbed to finish the year at $3.39/MMBtu and $3.31/MMBtu, respectively. During the same one-year time frame the rig count for the Marcellus Shale dropped from 172 rigs drilling for oil and gas to 113 rigs, according to NGI’s Shale Daily Unconventional Rig Count.

Recent production rates are “staggering,” with Cabot Oil & Gas Corp. reporting two Marcellus wells in 3Q2012 that had a combined 20-day production rate of 32 MMcf/d. “These numbers could even be higher if infrastructure constraints were not choking back production.”

“Not only is there a healthy backlog of uncompleted Marcellus wells (recent channel checks indicate the backlog could be upwards of 1,000), but upcoming pipeline and processing infrastructure should alleviate many of the transportation bottlenecks over the next two years.

“Specifically, the Marcellus has 3.8 Bcf/d of projected takeaway capacity [that] will be coming online this year followed by 6.9 Bcf/d in 2014. Additionally, there is another 1.1 Bcf/d of Northeast debottlenecking projects slated by year-end 2013.”

“All of these variables are creating the perfect storm for continued gas growth for the Marcellus.”

Raymond James now is estimating year-end 2014 Marcellus output of 10.4 Bcf/d, which would be up 3.2 Bcf/d from December 2012. Marcellus supply data, noted the analysts, is released only once a year; their data point is from December 2011. “Further upside to our numbers could come from the emerging Utica Shale play, which is not included in our bottoms-up analysis. However, that will have more of an impact on longer-term supply.”

With the 12-month West Texas Intermediate strip at $96/bbl, there aren’t many domestic crude plays that won’t work economically, they noted.

Even if the 2013 oil rig count drops by 10%, “we project a whopping plus-1.2 Bcf/d build in gas from our oily plays and another plus-0.2 Bcf/d from liquids plays. Combined, the associated gas build of 1.4 Bcf/d is almost as much as our projected 1.6 Bcf/d of growth from dry gas plays.”

The Eagle Ford has been the “biggest contributor” to associated gas supplies and should be responsible for an estimated 0.9 Bcf/d of annual supply growth from 2012-2014. Even the Permian Basin is seeing growing gas volumes on horizontal drilling.

The level of activity in natural gas liquids targets, which include the Granite Wash and Cana Woodford, should remain robust and should help keep gas supply growth resilient despite abysmal natural gas prices,” wrote Adkins and Robbins.

“Although the rig counts in these areas aren’t as jaw-dropping as the Eagle Ford, the massive amount of gas produced (recent Hogshooter wells can produce 3 to 4 MMcf/d of dry gas) make these plays also worthy contributors to production growth.”