Although condensate production in the Utica Shale is occurring at a slower-than-anticipated pace, Marathon Petroleum Corp. (MPC) said it has completed the conceptual engineering for condensate splitters at its refineries in Kentucky and Ohio, part of a $300 million investment to put the company in position to handle increasing volumes in the future. 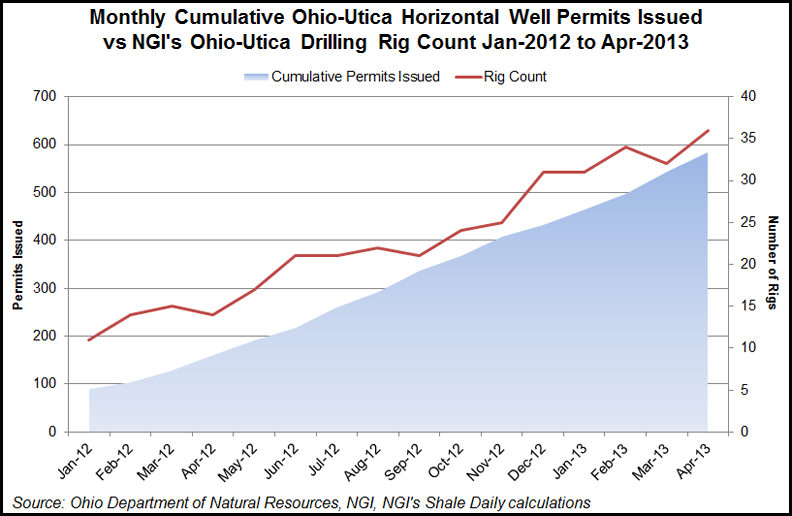 During a conference call with financial analysts on Tuesday to discuss 1Q2013 earnings, MPC Vice President Michael Palmer, who is in charge of supply distribution and planning, described the current landscape for condensate in the Utica as “somewhat volatile.”

“You’ve got companies out there that are spending billions of dollars on this infrastructure, and we fully expect to see our Utica condensate volumes ramp up significantly this year and then significantly, again, in 2014. So it still looks very optimistic to us.”

CEO Gary Heminger said the condensate splitters being constructed at refineries in Canton, OH, and Catlettsburg, KY, would be in-service in late 2015 or in 2016. “We believe without any additional investment, we can run roughly 20,000-30,000 b/d in total of condensate at those two facilities. As the amount of condensate grows there, we want to be in a position to make sure that we can handle more than that amount of volume, which we expect to come online maybe in a year or two.”

Heminger said the splitters would boost MPC’s condensate processing capacity to about 60,000 b/d. The in-service date for the units “is going to really be driven by how quickly the condensate production ramps up there. We’re doing the engineering, but we haven’t finalized exactly when we’re going to come online with those new units.” He added that the units may be suitable for a master limited partnership (MLP).

Last October, MPC signed an agreement with Harvest Pipeline Co. to convert part of its terminal in Wellsville, OH, into a facility capable of loading up to 50,000 b/d of condensate onto barges on the Ohio River (see Shale Daily, Oct. 17, 2012).

“The whole complement of investments in that area is about $300 million…over the next two to three years,” said MPC investor relations chief Garry Peiffer.

Heminger said some engineering work still needs to be completed for the splitters. “The conceptual engineering is complete…We are just in now to the front-end engineering. We do not have the yield structures and optimizations complete at this time yet, it will be awhile until we have that finished.”

The numbers of horizontal well permits and drilling rigs in Ohio’s Utica Shale have both increased steadily since the beginning of last year. A total of 88 permits had been issued and 11 rigs were operating at the beginning of 2012, according to the Ohio Department of Natural Resources. By Jan. 1, those numbers had climbed to 463 permits and 31 rigs, and the increase continues, with a total of 583 permits and 36 rigs reported by April 1.