Stronger-than-expected demand for natural gas across the world as the shoulder season gets underway is lifting sentiment in the shipping market, where rates to charter vessels are creeping upward. 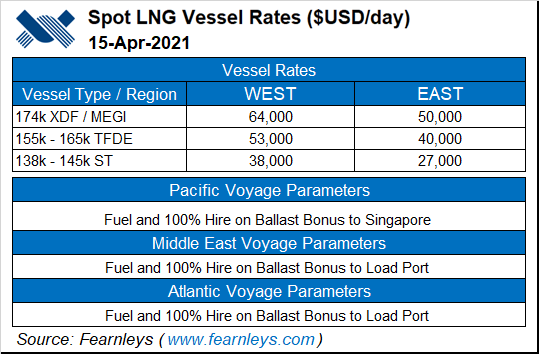 “We are witnessing a rare scenario as the start of 2Q2021 has been rather exciting compared to previous years,” analysts at shipbroker Fearnleys AS said this week.

Lingering cold weather in Europe that has prevented storage injections and restocking demand in Asia following a brutally cold winter is driving demand for liquefied natural gas (LNG) and the massive tankers that carry it across oceans.

Vessel rates broke records in January amid a historic cold snap in Europe and Asia, before stabilizing in February and falling to record lows in March. But the cheap tonnage created a flurry of activity last month as charterers looked to lock up vessels, according to shipbroker Braemar ACM.

The action has continued and the shorter-term outlook for the spot market remains strong. Fearnleys said there are some limitations on vessel availability in the Atlantic Basin, where U.S. exports remain exceptionally strong at nearly 12 Bcf/d. Abnormally strong demand in Asia for this time of year is also driving sentiment in the shipping market. LNG demand in China alone is up by around 30% since the beginning of the year, according to Braemar.

The “near-term spot shipping market is still looking positive with requirements being posted regularly both east and west for April and May, though the current vessel availability is comfortably able to meet it,” Braemar said. As summer unfolds, the firm said “we expect the spot and winter demand market to converge, once again tightening the market beyond what’s available.”

The May Title Transfer Facility contract in Europe has increased markedly this week, up by more than 30 cents since its close last Friday. Spot prices in Asia remain strong at above $7.00/MMBtu as buyers there look to replenish inventories after they were caught flat-footed this winter and were forced to scramble for short-term supplies in the spot market.

LNG netbacks to the U.S. Gulf Coast are also near $4.00/MMBtu through year’s end, according to NGI calculations, providing strong incentives to move as many cargoes as possible to key markets in Europe and Asia. Through mid-March, Asia had accounted for nearly 60% of all U.S. LNG exports, NGI data shows.