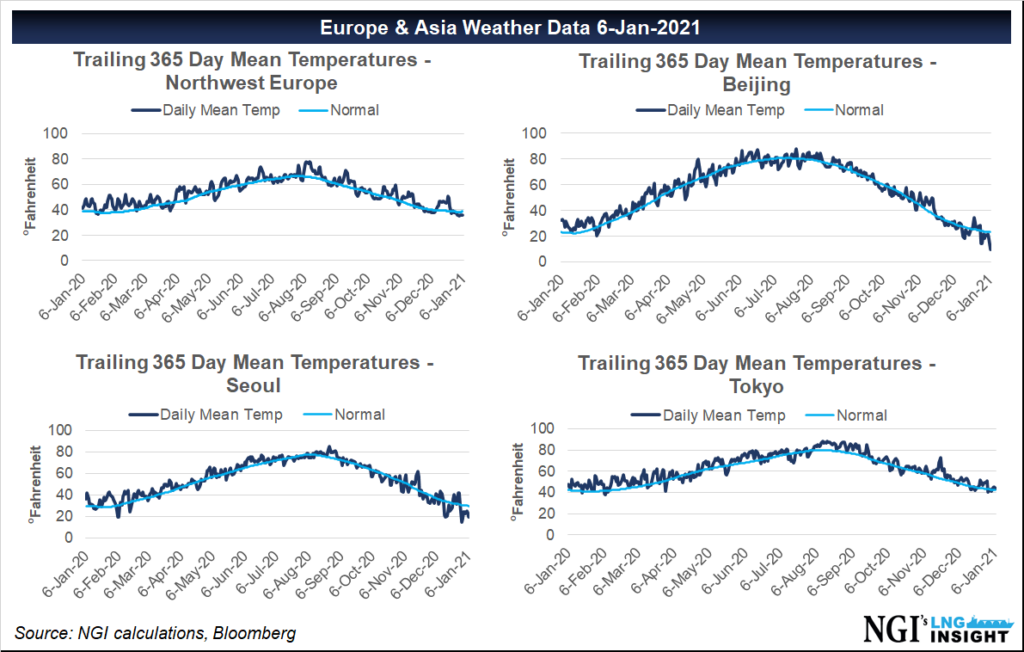 Trafigura Group Pte. Ltd. purchased a cargo from PetroChina Co. Ltd. at $21.70/MMBtu for delivery to China early next month. The transaction was above the previous high of $20.20 set in February 2014 and the $20.80 deal reported earlier this week by Bloomberg between Trafigura and Gunvor Group Ltd. for a South Korea cargo.

Spot market activity had pushed up the February Japan Korea Marker (JKM) futures contract to $15.105 on Tuesday, an astonishing difference to the benchmark at this time last year, when it settled at $5.315 amid a supply glut and warmer weather, according to NGI data.

“Very cold weather in Northeast Asia at the moment, especially in South Korea, and a steep economic recovery in China stimulating demand from industrial customers are of course underlying factors behind this sharp price rise,” said Engie EnergyScan analysts in a note on Wednesday.

The China Meteorological Administration issued a weather alert Tuesday for the next 10 days that’s expected to impact a large swath of the country’s eastern half with temperatures forecast to be slightly above freezing. Meanwhile, temperatures across much of Japan were forecast below freezing over the next week and similar weather has settled across South Korea, according to national weather reports. Those countries are the world’s top-three LNG buyers, according to the International Group of Liquefied Natural Gas Importers.

“A colder winter with increasing demand for LNG in Northeast Asia, particularly in China, and the continual strength seen on product prices are supporting an arbitrage for West to East trades,” said analysts at shipbroker Fearnleys AS. “Challenges to secure slots through the Panama Canal have also resulted in longer waiting times, further tightening the market.”

NGI data showed Tuesday that the spread between the Gulf Coast and Asia was at $11.192 for those with vessels chartered. March spreads are also strong at $6.080. U.S. offtakers typically need a premium of just a few dollars in Asia to turn a profit.

Fearnleys said it expects shipping availability to remain limited as vessel rates are at multi-year highs. According to NGI data provided by the shipbroker, spot rates to charter a vessel in the Atlantic Basin on Wednesday stood at $180,000/day and $170,000/day in the Pacific Basin. Spark Commodities also assessed daily rates near $200,000 in the Pacific and above $220,000 in the Atlantic.

While global LNG demand in December fell by 2% year/year as the Covid-19 pandemic continued to take a toll on demand, Asia posted record monthly imports that were up by 15% compared to the same time in 2019, according to Tudor, Pickering, Holt & Co. (TPH).

Along with weather and more than165 U.S. cargo cancellations that persisted through the fall before overseas prices rebounded, TPH analyst said LNG supply disruptions late last year in 11 countries driven by maintenance issues and feed gas disruptions have left the Asian market short on natural gas.

Temperatures are expected to warm up in Asia later this month, which could put downward pressure on LNG spot prices, EnergyScan said.

“But with LNG stocks dropping quickly, restocking demand could be strong after the winter peak and could keep JKM prices at a high level, or at least at a sufficient premium” to the Title Transfer Facility benchmark in Europe “to attract enough flexible cargoes.”

That could bode well for U.S. LNG exports. TPH analysts said a similar trend could shape up in Europe, where less LNG imports have arrived because of the rally in Asia. European storage could be depleted more rapidly “opening up an opportunity for U.S. LNG utilization to push 90%” through the second and third quarters of this year if storage inventories are lower.